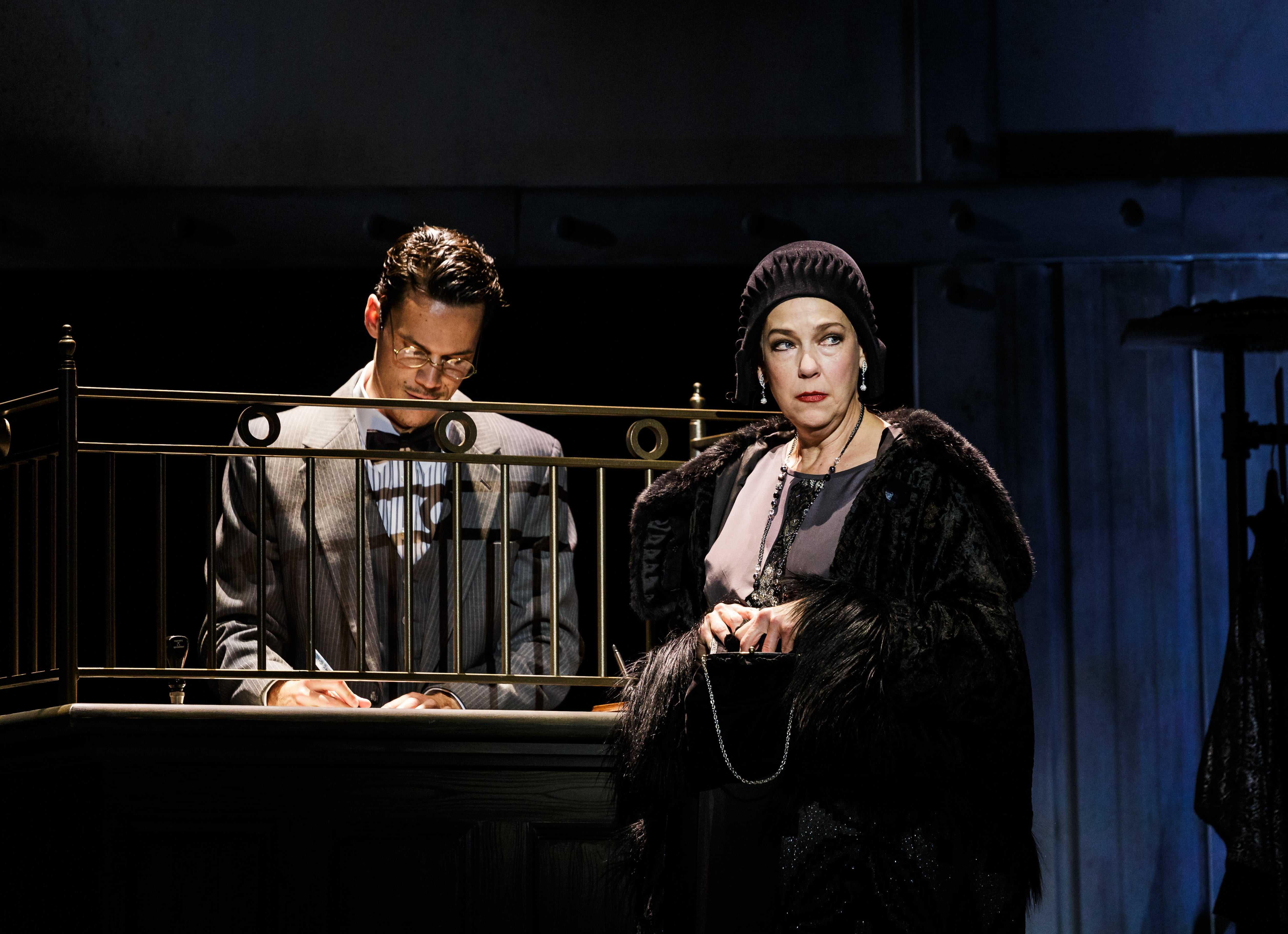 Life can often feel like a movie. When things are going extremely well or horribly wrong, it can seem as if we’re the leading actors of our own feature film, following a singular plot line that rises and then falls again.

But unlike motion pictures, our familiar melodramas rarely end as neatly as Tinseltown would have us believe. Joe DiPietro, the Tony Award-winning writer of “Hollywood,” exemplifies the consequences of treating reality as fiction by telling the real, screen-worthy murder story of silent-film director William Desmond Taylor (Scott Drummond), whose death remains a cold case.

On a crisp February night during the golden age of the film industry, William, a.k.a. Bill Taylor, is shot and killed in his swanky Los Angeles home after enjoying the company of two of his budding actresses. The job of the audience and D.A. Thomas Woolvine (Jeff Marlow) of the LAPD is to figure out whodunit, a task that proves extremely hard to accomplish amid the sin and corruption that characterizes Hollywood and the pictures produced there during the roaring ‘20s.

Throughout the play, a dead Taylor looms over the investigation, dropping hints and reenacting his murder as different scenarios are discussed. In time, the amount of suspects can be counted on one hand, but fame-driven passions, yellow journalism and the crafty dialogue of the playwright serve to obscure the truth beyond recognition.

To contrast the hedonistic nature of the movers and shakers of the film industry, Will Hays (Patrick Kerr), the newly appointed president of the Motion Picture Producers and Distributors of America, enters the scene as the conservative voice of Middle America. He seeks to purge the scandals he sees going on in cinema reels, acknowledging that the only way to oust the problem is to start at the root.

Referring to the likes or dislikes of his Aunt Sally as a measure of purity, Hays is convincingly characterized by the plain-speaking, small-in-stature Kerr. Acting as the narrator of “Hollywood” and as a pivotal player, Kerr’s performance depicts with masterful composure the God-fearing Hays’ struggle for control against the filmmaking outlaws of the era.

The amount of world-class talent on stage is an unmistakeable facet of “Hollywood.” While some of the supporting roles fall to the wayside, each of the five main characters puts on dazzling performances from start to finish. Tony Award-winning actress Harriet Harris, who plays Charlotte Shelby — the protective mother of Mary Miles Minter (Talene Monahon) — is particularly spectacular in her passionate, charged bouts of outrage. But when comforting her all-but-sane daughter, Harris adopts a motherly tone that can make any mature adult feel as if they are a needy child.

The composer of “Hollywood,” Wayne Barker — who single-handedly sets the tone of the play from his piano onstage — is also a Tony Award winner, receiving the honor after producing the score for the La Jolla Playhouse’s production of “Peter and the Starcatcher.” His jumping chord progressions and single-key musical gymnastics, reminiscent of early 20th century saloon music, almost fool you into believing you’re actually watching a silent film instead of a theatrical production, further blurring the line between cinematic artifice and present reality.

The La Jolla Playhouse didn’t cut any corners in its production of “Hollywood,” and both the cast and crew have put their best foot forward. The set and choreography frame the actors in a believable time and place, and artistic director Christopher Ashley has made it impossible to turn away from the mysterious story that unfolds under the dim lighting.

At the end of the second act, just as it seems we’ve discovered the killer, it becomes clear that, in a place like Hollywood — where fiction and nonfiction have fused together to become one — nothing is as it seems. And if that’s the case, then why bother with the end of the story, as long as the rest is dazzling, dramatic and beautiful? Because, let’s face it, the truth doesn’t sell.