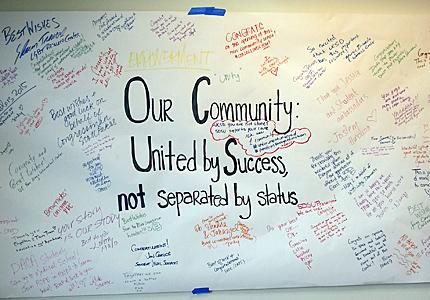 The UC Office of the President announced on May 11 that it will increase funding for undocumented student resources over the next three years, and $8.4 million will be distributed across all 10 UC campuses annually for programs to share.

The increased funding will be split between three areas of services: the University of California’s DREAM Loan program, student services staff coordinators and student fellowships, and the UC system’s Undocumented Legal Services Center. The DREAM Loan program, which provides loans to undocumented students that are then paid back directly into the DREAM program, will receive $5 million per year, while $2.5 million will be designated each year for the coordinators and fellowships. The Undocumented Legal Services Center, which is located on the UC Davis campus but provides free legal services for all UC campuses that do not have a law school for undocumented students and their families, will receive $900,000 annually. According to the Elica Vafaie, the center’s supervising attorney, the funding increase will likely be used to bolster existing services and develop new programs at campuses with law schools.

“With the increased funding, it is wonderful that there is an opportunity to expand the immigration legal services in partnership and support with other local campuses that do have law schools,” Vafaie told the UCSD Guardian. “UC Berkeley has its own separate funding, but to be able to provide equity of access to the immigration legal services across all campuses is something that we are very excited about. The students and everyone have been working hard towards this goal.”

“We are committed to continuing a path forward for undocumented students at the University of California,” Napolitano said in a press release. “This funding will further strengthen the university’s undocumented student initiative, and help ensure that these students receive the support and resources they need to succeed.”

With the initial $5 million set to expire in June, many students feared that Napolitano would not renew funding for undocumented services. To protest this, students blocked off UC Berkeley’s Sather Gate on April 16 — this year’s Cal Day — and called on the Napolitano to secure additional funds to keep the programs alive.

“Since California is home to about 2.5 million undocumented individuals who are a tremendous and important part of our society, our economy and part of the UC system, it is important that the [university system] provide a range of services to the students and their families so that they can thrive and grow in the university and in society,” Vafaie said. “There are huge educational and personal benefits to having undocumented student coordinators, grants and scholarships for students to alleviate financial barriers to education and access to immigration legal services which can often result in a work permit or a permanent form of immigration relief for the student or their parents.”