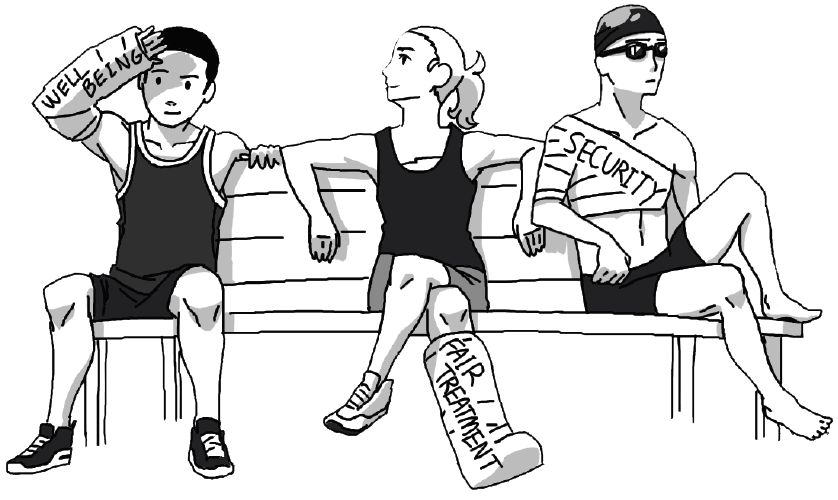 Last week the UC Board of Regents voted to guarantee the continuation of athletic scholarships for student-athletes who have suffered career-ending injuries at UC Davis, UC Riverside, UC Irvine, UC Santa Barbara and UC San Diego. The expansion of these benefits — guaranteed to both UCLA and Berkeley student-athletes since 2012 — reflects a newly kindled interest in the well-being of our university’s collegiate athletes, particularly off the field and in the classroom. This decision comes at a particularly pertinent time for UC athletics as many, if not most, of its athletic programs are undergoing at least some form of transition. UC Berkeley, still reeling from the controversy that surrounded its use of taxpayers’ money to renovate the historic football stadium, suffers from an unsustainable budget as well as poor academic performance from its athletes. UC Santa Cruz, left out of the policy change as the only Division-III UC campus, is voting on whether to keep or remove its athletic program entirely, whereas our own school is voting this week on whether to upgrade to Division I. Wherever the fates of these programs may land, and regardless of the future of UCSD as a Division-I university, this move should be warmly welcomed.

Student-athletes have been a reliant source of income for universities since the institutions first started on their paths toward commercialization many decades ago. Today, athletes draw crowds who will pay good money to experience the thrill of watching a collegiate sports game live. Ticket sales, merchandise and marketing rights all compound this to generate huge amounts of revenue for advertisers and universities. Last year, the NCAA generated $912.3 million in revenue, most of which came from marketing rights tied to the annual Division-I basketball tournament. Student-athletes have become veritable cash cows, but they don’t see a cent of this profit.

With the potential to generate huge amounts of profit, these student-athletes have spurred a rat race between universities to recruit these individuals with enticing financial scholarships, lax academic requirements and other benefits. But this hospitality, in most cases, only extends as far as athletes can continue to produce results. The NCAA bylaws 2.3.4.8 and 3.2.4.8.1 require student-athletes to have their own medical insurance in order to cover athletic injuries. Furthermore, NCAA-member institutions are not required to cover what the insurance does not, meaning that in the case of injuries on the field that result in costly treatment, student athletes and their families are potentially left to front the bill. The NCAA itself will only cover the cost if it exceeds $90,000 under its Catastrophic Injury Insurance Program. While life-threatening injuries are covered, non-fatal, yet crippling, injuries are not, which can easily end athletic participation in the field.

The NCAA reports, on average, over 12,500 injuries annually. An injury that prevents students from competing is grounds for losing a scholarship. Furthermore, if the price tag sits between the student’s insurance coverage and the NCAA’s $90,000 threshold, institutions are not even required to front the bill. A freak accident on the field or during training could spell the end of not only a student’s athletic career, but that student’s academic one as well if there’s a scholarship tied to the student’s athletics. This is certainly not the treatment you would expect the administration to give to students who contribute both a significant amount of school spirit and revenue to the university.

While the UC system is not as large a perpetrator of this exploitation of students compared to other institutions, ensuring that student-athletes retain their scholarships regardless of chance injuries is a positive step toward recognizing athletes as students and as valued contributors to a university. The UC system should be commended even further for extending these benefits to its smaller schools outside of California’s “Big Four”: UCLA, Berkeley, Stanford and USC. Although these schools do not generate nearly as much profit as bigger Division-I schools, taking this step toward treating all student-athletes equally within the system is a positive one.

The extension of these benefits should not be seen as an afront to academics: whereas UCLA and UC Berkeley are UC institutions entrenched in the dogma of collegiate sports and its commercialization, other UC schools are primarily focused on academics. Student-athletes at these UC institutions have a higher average GPA than the one of the student body at large, with at least 60 percent of UCSD’s student-athlete population earning a GPA higher than 3.00. Student athletes should not have to worry about the next big injury jeopardizing their academic career.