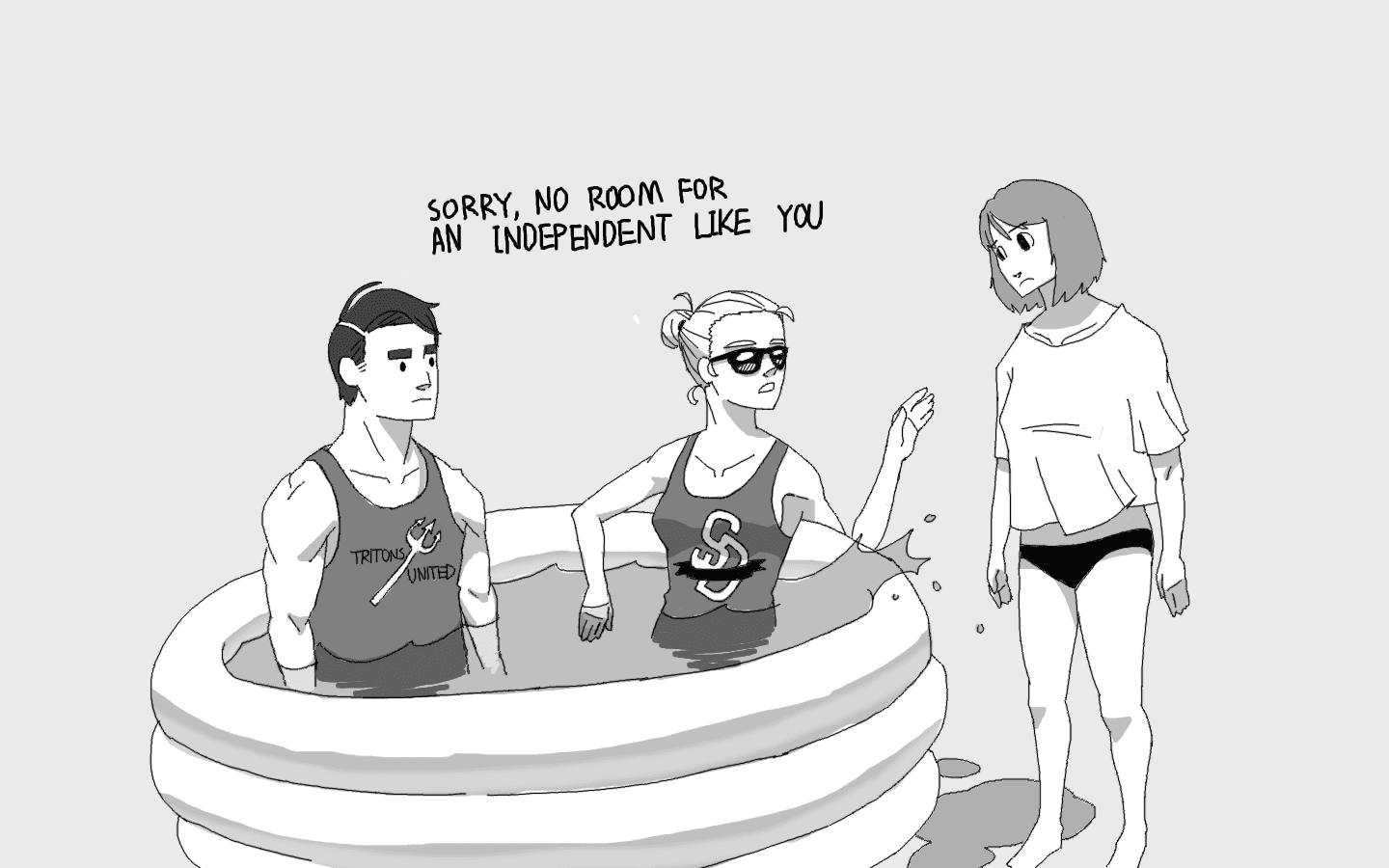 This year’s A.S. elections were dominated by the same two slates that competed with each other last year, mirroring the two-party system that defines our national politics. Though some may argue that a dominant party will get A.S. Council to act as a cohesive unit, history has shown that this isn’t necessarily the case. In the 2014–15 school year, when A.S. was dominated by Tritons Forward, Council meetings were as indecisive as ever, with a number of controversies involving the C.H.E. Cafe and Co-op representation on the Council taking up a lot of time. Taking a look back at A.S. Council’s recent history, students will realize that party affiliations are hardly a determinant when it comes to Council’s role of: appropriating student funds, saving student spaces, diversifying who can voice their opinion on Council and jump-starting new programs. Such divisive campaigning, then, is more preoccupying than progressive.

A look at both parties’ platforms reveals how fundamentally similar their goals are. This year, Students Determined’s platform promised to “increase accessibility of mental health resources, educate students on sexual assault policies being implemented at the systemwide level, among many other concerns.” Similarly, Tritons United emphasized that over the past years they have, “improved awareness on important topics such as sexual assault, mental health and intersectionality, protected valuable UCSD traditions such as Sun God, and ensured that your student fees went to where students wanted their money spent.” If anything, the elections are not a contest between differing ideas but a debate over who is best able to carry out our collective goals.

Running together on the same slate undoubtedly allows candidates to bond in a unique way by forcing them to learn how to work through their differences. However, campaigning and governing are two distinct experiences: one is about winning, while the other involves a concrete implementation of those plans. During campaign season, the goal is to win and, as such, candidates affiliate themselves with a slate which can provide them with financial support and visibility. However, candidates become Councilmembers, and personal as well as political preferences inevitably change with their new roles. Even though candidates may have chosen to run on the same slate because they have worked well together in the past, their relationships could very well change and inhibit their general campaign goals from being realized. Additionally, the most recent elections had several candidates added to slates at the last minute because of unexpected vacancies, illustrating that slates can and often choose members simply to fill a void rather than to develop concrete solutions to campus problems.

Issues pertaining to political bandwagoning, such as inaccurate representation of student views and rapid slate formation begin with the length of the election cycle itself. The slate registration, campaign and voting processes all take place within the course of a month, which is simply not enough time for slates to establish their positions and membership adequately. Requiring candidates to form their slates earlier in the year, and prior to registration, would allow candidates to fully define platforms slate before campaigning and reducing the likelihood of ideas potentially being stolen. Also, this would allow potential candidates to find students and create slates rather than reconfigure their ideas to those of an established slate. The principle of embracing individuality should be furthered by organizations which choose to endorse candidates. As we have seen, slate formation has its shortcomings and the label alone is unreliable in predicting how a candidate will vote when elected to office, let alone how well they will work with their fellow Councilmembers. Although endorsing individuals poses the same dilemma in terms of the next election term, students will be confronted with more specific ideas. Slate names and affiliations can be misleading as well, reducing complex problems to a general view that offers quick fixes. Ultimately, it is the individual Councilmembers who will be voting and creating A.S. Council programs. Thus, their personal perspective, which cannot be possibly addressed in a short campaign slogan or list of platforms, is what voters need to understand.

An extreme alternative to the two-slate system would be to do away with slates entirely, a solution which would force voters to pick candidates based on their individual merits rather than the group they associate with. As ideal as this solution may sound, though, it still has its potential drawbacks. Without support from a larger group — and with students simply voting for candidates based on slate affiliation rather than on individual philosophy — elections may become even more of a popularity contest. Having a wider variety of unaffiliated candidates may also increase voter apathy by overwhelming students with too many choices, a potentially disastrous result given that only 20 percent of the UCSD student body turned out to elect 16 students to represent them on A.S. Council for the 2016–17 academic year. With a smaller percentage, the election would have been considered void.

These potential drawbacks, however, must not overshadow the central issue that independent candidates cannot garner nearly as much publicity as slate candidates, who — due to group membership — benefit from pooled resources and greater manpower.

A feasible first solution to this would be for A.S. Council to provide all candidates with basic resources for their campaigns, such as an official website listing the candidates’ statements and an allowance to fund other campaign activities. This additional resource would level the playing field and ensure that everyone’s voice is heard equally.