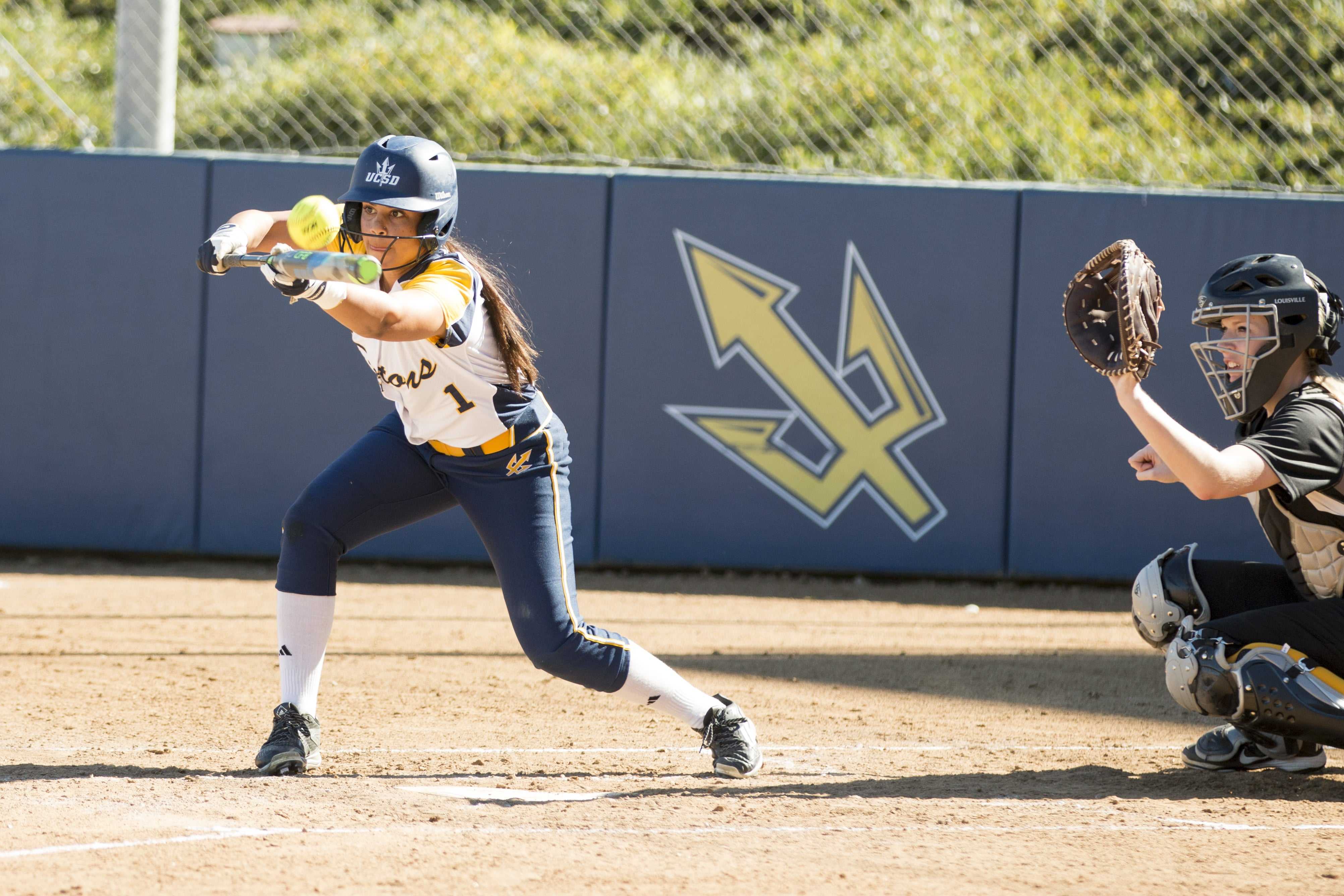 UCSD split double-header against CSU San Marcos after series win over the Gators.

Having just split its Friday games against San Francisco State, the UCSD softball team looked to take the series against its conference rivals and overtake them in the California Collegiate Athletic Association standings. After sweeping the Gators and splitting their following doubleheader with Cal State San Marcos, the Tritons improved to 29–17 overall and 19–13 in CCAA games.

Riding in off of their bounceback win against San Francisco State on Friday, the Tritons looked to take the lead in their series against the Gators. For the first few innings, however, the game remained quiet. Despite getting players on third base in the first and third innings, the Tritons couldn’t strike gold for the first half of the game.

But thanks to the Tritons’ defense, the score remained flatlined until they finally converted one of their opportunities in the fourth inning. With bases loaded, freshman shortstop Maddy Lewis, sophomore outfielder Kendall Woken and senior shortstop McKenna Clewett all found their ways home to put the Tritons up 3–0 by the end of the fourth inning.

With that, the Tritons held onto the shutout for the remaining three innings, while adding another three runs to their lead. UCSD’s offense remained balanced throughout the game, with all five runs batted in by different players. Senior left-handed pitcher Lexi Edwards was credited with the win, allowing eight hits and zero runs against 26 at bats. Even with the eight hits allowed, the defense held its ground, leading to a terrific 6–0 shutout.

In a game that was called short due to time, UCSD clearly had the Gators’ number. Distancing itself from its previous approach of scoring in bunches, the Tritons produced a steady stream of offense, scoring in each of the first four innings. Lewis kept her contributions coming, as she led the offense with two RBIs off of sacrifice flies.

Heading into the final inning up comfortable 5–0, the Tritons loosened their grip on the Gators a bit, erasing their dreams of a second straight shutout. San Francisco State cut the deficit by two, but the Tritons ultimately closed out the game with the win.

Senior right-handed pitcher Hannah Duarte was credited with the win, allowing just four hits and two runs against 19 at bats. Sophomore outfielder Kelsi Maday finished with an impressive one hit, one run and one RBI statline while senior outfielder Taylor Abeyta matched Maday’s impressive output and adding two walks to the mix.

“We knew this was an important series and we had to play well,” UCSD Head Coach Patti Gerckens told the athletics department. “We really competed well today and had some strong pitching from Lexi and Hannah.”
After the sweep, the Gators fell to 23–20 overall and 17–13 in the CCAA.

After a day of rest, the softball team was back at it again in its first afternoon stint with Cal State San Marcos. Unfortunately, the offense cooled down after its off day, as the Tritons failed to capitalize on any of their opportunities.

Starting with the second inning, the Tritons had no trouble getting players on base as indicated by their five total hits and one walk for the game. But the Tritons also wound up leaving seven players on base, which, when combined with the team’s single run for the entire game, tells a startling tale of missed opportunity.

Due to the close, grind-it-out nature of the game, however, a single run was all that it took to bring the Tritons within striking distance. Thanks to a single by Abeyta, sophomore second-baseman Kendall Baker was able to make a dash to home plate for a nail-biting one-run game. Unfortunately, UCSD was not able to rekindle the magic that sparked its offense in its previous two games and fell to the Cougars 2–1.

Eager for redemption, the Tritons fought hammer and tongs in their immediate rematch with the Cougars. As if they had just woken from a trance, the Triton offense quickly got into gear, scoring a run in the first inning thanks to a single by sophomore catcher Lauren Sanders, allowing Lewis to run to home. From then on, the game turned into a back-and-forth duel, with each team scoring two runs in the following innings.

After a single from Abeyta enabled both Maday and Baker to put runs on the board, the Tritons held the lead for the rest of the game and eventually ended with a 4–3 UCSD victory.

Abeyta continued her stellar play with two RBIs, two hits and a walk-off of three at bats, while Baker led the team in hits and runs with three and two, respectively. Junior left-handed pitcher Milana Casillas, however, took credit for the win, as she allowed two hits and zero runs after replacing Duarte in the first inning.

UCSD will host Cal State San Bernardino in back-to-back double-headers on April 15 and 16.