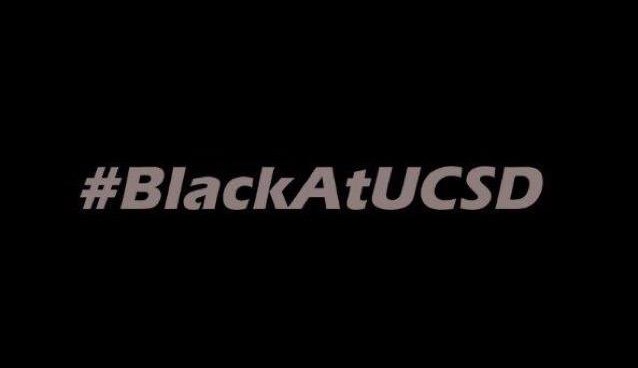 According to the Facebook event page, #BlackAtUCSD is a hashtag meant to “chronicle different events, programs, and protests on campus,” and “serve as an archive of Black life [and] Black experiences … at UCSD.”

Andre Thompson, student intern at UCSD’s Black Student Union and one of the organizers of the event, explained to the UCSD Guardian what the origins of the hashtag are.

“The hashtag #BlackAtUCSD has been used since my first year as a way to chronicle the life and experiences of Black and Afrikan students at UC San Diego,” Thompson said. “Since my second year it has exploded in use and has been an archive of Black life at UCSD to address the anti-Blackness that prevails here.”

Over the course of 10 weeks, students are encouraged to share their stories with the hashtag through Twitter, Instagram and Facebook in the context of weekly themes including “Black Appropriation,” “Black in the Classroom” and others.

These anecdotes, according to Thompson, are meant to highlight and point out the overt and more often subtle ways in which black students experience racism on campus and in their daily lives.

“Usually the conversation of Blackness is only brought up when racist events come up across the country and people quickly forget the reality of being Black on an everyday basis,” Thompson said.

Thompson introduced a Google Form to the event page in which students could submit their #BlackAtUCSD stories anonymously, citing the concern that “students might feel more comfortable posting to the hashtag through an anonymous platform.” Thompson also stated that non-black students can support the campaign by discussing incidents of racism they have observed on campus.

“Non-Black students can show solidarity by telling their own stories of anti-blackness … and how it affects them,” Thompson said. “The biggest source of support would be to learn and make sure the people around them learn as well.”

UCSD has a history of racist incidents on campus. In 2010, one of the campus’ fraternities hosted a “Compton Cookout,” which encouraged students to dress “ghetto” and eat watermelon as a means of mocking Black History Month, prompting backlash from the black student population and its allies. That same year, a student was suspended after she admitted to hanging a noose on the seventh floor of Geisel without understanding the racial implications of the symbol.

Just recently, the self-proclaimed satirical newspaper The Koala released an issue containing racial epithets and mocking the use of safe spaces. The BSU staged protests against The Koala last November.

But Thompson argues that it is the non-antagonistic and appropriative forms of racism that this initiative is meant to target.

“This campaign is necessary to open up the eyes of UCSD and bring together the REAL story of Blackness at this campus and to dispel many harmful stereotypes perpetuated by the student body,” Thompson said. “The racial exclusion here is of commodity. People only want to consume Blackness without caring who it hurts or affects”

According to the UCSD admission statistics, black students comprise less than 2 percent of the school’s undergraduate student body.