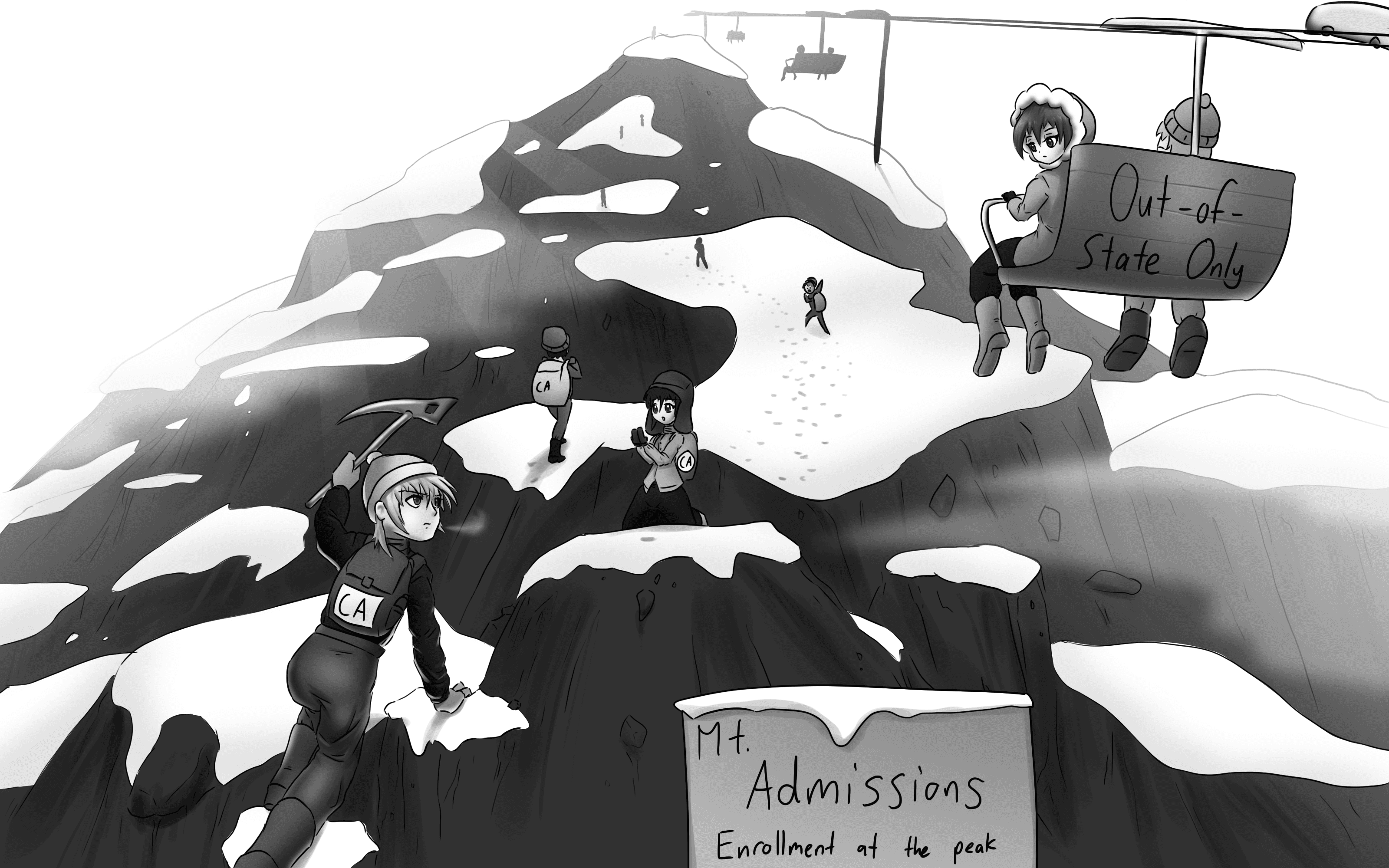 As recently as 2012, UCSD had an applicant ratio of 3.85, approximately 45 percent less than its admit ratio of 2.09. What this means is that despite the in-state applicant pool being nearly four times larger than the out-of-state pool, it ended up admitting only two Californians for each non-Californian.

To its credit, UCSD has made significant strides in giving priority of access to our state’s residents, seeing substantial drops in the ratio differential to 33 percent and 27 percent in 2013 and 2014. However, the following year, it stagnated at a differential of 29 percent.

However, UCSD isn’t the only one with this problem. Four of the eight other UC campuses have an admit ratio that does not reflect or exceed applicant ratio: these campuses are UCLA (16 percent), UC Santa Cruz (39 percent), UC Davis (40 percent) and UC Irvine (41 percent). Though not every UC campus exhibits this issue — UC Santa Barbara, UC Riverside, UC Merced and UC Berkeley each have admit ratios greater than their applicant rations — it’s apparent that admitting out-of-state students at disproportionate rates is a systemic issue.

This problem is even harder to swallow when realizing where the funds raised from out-of-state tuition are allocated: administrative salaries. In 2006, 80 percent of Americans polled believed that CEOs are overpaid. Although CEOs and Chancellors of universities aren’t exactly the same, the idea of executive pay being too high holds strong. Back in 2014, the three lowest paid UC chancellors received a 20 percent pay raise, bringing the lowest paid chancellors at UC Santa Cruz and Riverside’s salary $383,160 annually. The reasoning behind this was to “correct injustices” of chancellor pay in comparison to the 62 other universities in the Association of American Universities. The UC chancellors who received a raise had the some of the lowest base salaries of the 62 universities and the 10 UC chancellors overall have their salaries roughly seven percent lower than the average public university chancellor on the list. More recently in 2015, five UC chancellors received a three percent pay raise to maintain a competitive edge compared to other universities in the nation. This included UCSD’s very own Chancellor Pradeep Khosla, bringing his salary to $436,120 annually.

These raises can be contrasted to the California State Universities’ similar crisis with inadequate funds. Without having the similar draw from out-of-state students to CSUs, Chancellor Timothy P. White must allocate funds appropriately between the 26,000 professors, lecturers, librarians, counselors and coaches who will go on strike if they do not receive a deal on their appropriately request five percent raise and the resources that support students.

With the tuition hikes being barely held at bay and recent implications of the UC system increasingly admitting out-of-state students at lower standards for their higher tuition fees, raising executive salaries seems nonsensical. Yet, it shouldn’t stand as the scapegoat nor the cure-all to the lack of funding in the UC system. Yes, these executive should be held accountable for their actions and should fill their role as advocating for the students across the UC campuses. And yes, these chancellors should be focusing their efforts at the UC campuses — and solely the campus they lead — as stated by their bylaws. But a high-demanding job comes at a high price. Albeit the rationale of maintaining competitive pay in comparison to other university chancellors may not hold water with many, the notion to reduce executive pay is more symbolic than effective. Chancellors and executive positions’ salaries should be under scrutiny but with the same vigilance over other areas where financial resources are being invested in more heavily and that are far less beneficial to students as a whole.

As public funding is increasingly sparse for the state’s public education — and particularly the University of California — the university substantially supplements federal and state funding with investments, which account for almost $100 billion. The annual report by the UC Chief Investments Officer of the Regents — referred to as UC Investments — breaks these investments into categories of endowment, pension, retirement savings programs, TRIP, STIP, split-interest gifts, and private equity. Pension investments entail more than half of this $95.7 billion. Last September, UC Investments made one of last year’s multiple divestments by withdrawing from coal and oil sand companies, which the L.A. Times reports as a $200-million move made due to the decreasing price of these entities. This decision, however — one made for environmental concerns and financial risk — should be one of many.

The UC Investments rightfully divested from the coal industry, whose plummet can be seen via China’s major announcement last December to close 1,000 coal mines in the sake of reducing gas emissions. But the Office cannot neglect what was not sold of the remaining $10 billion of investments in oil and natural gas — which make up the 10 percent of the $100 billion total — as oil investments, in the long run, are not sustainable. UC Investors must not just be aware of “slowing global demand,” which UC Investments Officer Jagdeep Baccher cites in the UCIO annual report as a reason for divestment from coal: they need to fully be ahead of it. This means looking further into investments in the oil industry, which the New York Times describes as being in its “deepest downturn since the 1990s.” From pledges made by over 5,000 companies at the Paris Climate Accord earlier this year to Obama’s budget proposal to raise clean energy spending by 20 percent, it is clear that investments in particularly unreliable industries are not safe or reasonable destinations for our university’s money.

But larger improvements in money management must be made in regards to investment sectors, rather than simply in industries. According to the Center for Investigative Reporting, the endowment returns for nine major institutions from 2004 to 2009 averaged 10 percent, while that for the UC returned 7.3 percent. Universities like Columbia and Yale had even higher returns at 11 percent. Of course, managing a budget in the billions comes with balancing risks with financial security, but as the largest university system in the world, it is clear that perhaps where UC needs the greatest resources is in investment strategy: ensuring not only that money is not being lost while it should have been divested, and ensuring that it’s being utilized where it is placed.

In order for the University of California to effectively serve Californian students — for whom the university was created — the urgent issue of funding must be addressed with more than a temporary solution of utilizing the higher financial benefit of enrolling international students. Students, although not currently treated as, are not merely consumers. Administrative funding cuts and divestment alone will not ensure accessible public education: rather, substantial and thorough means must be taken by the UC in order to analyze the future — not the present — of our funding. Jeopardizing the quality of education for marginal financial gains is not a valuable option.