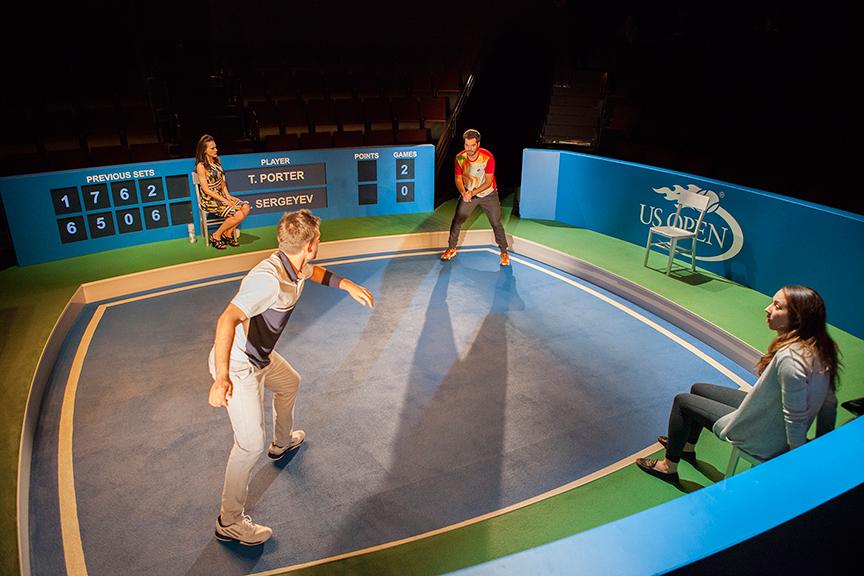 The last match. A simple phrase that can refer to any number of relationships and circumstances. One idea that Anna Ziegler mines, revealing most, if not all, of what that very phrase could mean during one tennis match: one setting, two polarizing worlds that overlap to form the perfect match. Tim Porter (Patrick Adams, “Suits”) and Sergei Sergeyev (Alex Mickiewicz, “Therese Raquin”) are both pretty good at playing tennis, to say the least, and want to win the U.S. Open; that’s about as much as they have in common. Every point won and every point lost is coupled with a memory or insecurity which enjoins the players to act accordingly. Furthermore, the lights and sound effects make you see props where there are none, intensifying the match by transforming a tennis court into an intimate arena.

Tim is an aging pro who is insecure about the possibility of losing his lifelong status as America’s golden boy. Converting a hobby into a profession was never really a question for Tim; the option was handed to him on a shiny new tennis racket, having grown up with both parents and ample financial support. Contrast this to Sergei, who had to leave his family and life in a rural Russian village so that he might forge an opportunity for himself through something he was good at. As his fiancee, Gallina (Natalia Payne, “Me, Myself and I”), points out, thinking “is not [Sergei’s] strength.” Sergei and Tim are blatantly in each other’s heads, sizing each other up with every toss of an invisible ball. Sergei capitalizes on Tim’s dependence on the crowd and celebrity status by seizing every opportunity Tim appears to falter and calling it out as the weakness it ultimately is — after all, they “don’t want to watch man get slaughtered so they check their phones.” Tim, in turn, sees through Sergei’s aggressive play and exposes it for the insecurity that it is. The cycle continues until match point.

Their performance on the court is reflected through their personal relationships. Tim’s relationship with Mallory (Troian Bellisario, “Pretty Little Liars”) is something we typically see in overly sentimental stories that attempt to portray love: she is his best friend, devoted wife, mother of his son and, not surprisingly, the partner who could not crack the top-10 rankings in the tennis world. While Mallory’s relationship with Tim itself is cheesy, the actors are flawless in transmitting their tumultuous emotions as they endure a series of miscarriages. Especially poignant is the moment the Tim abandons his charm and screams at Mallory when she accuses him of being too much into the game to share in her pain. Sergei and Gallina, however, became who they were because of their hardships and, as such, are focused on becoming tougher individuals, channeling their affection into phrases of encouragement such as “Go be brave in ways Mom could not” — advice from Gallina prior to the match. Gallina, like Mallory, is also the less successful partner; her hopes of becoming an actress diminished, she chooses to live vicariously through Sergei’s career. Again, the actors are on point in terms of portraying their relationship. We cannot deny, however, that Sergei and Gallina’s relationship is the more complex of the two and their respective lines illustrate this.

While the internal battles and dialogues are profound, forcing us to confront our own internal conflicts and empathize with the characters, it is important to recognize that the writers do take advantage of stereotypes. Tim is, after all, a seemingly typical white, American, upper-middle class boy while Sergei fits perfectly into the uneducated, explosive Russian playboy who has had to fight his way to the top. Their partners also show the two sides of the female spectrum: the crazy, chatty fiancee versus the unsatisfied but supportive wife. Nonetheless, the stereotypes are a perfect match and are tempered, to an extent, by organic movements and dialogue.

Overall, “The Last Match” is a worthwhile experience, and resentment, privilege and culture are seamlessly woven into a cohesive set of struggles which bounce off the court, giving us a snapshot of our own lives.