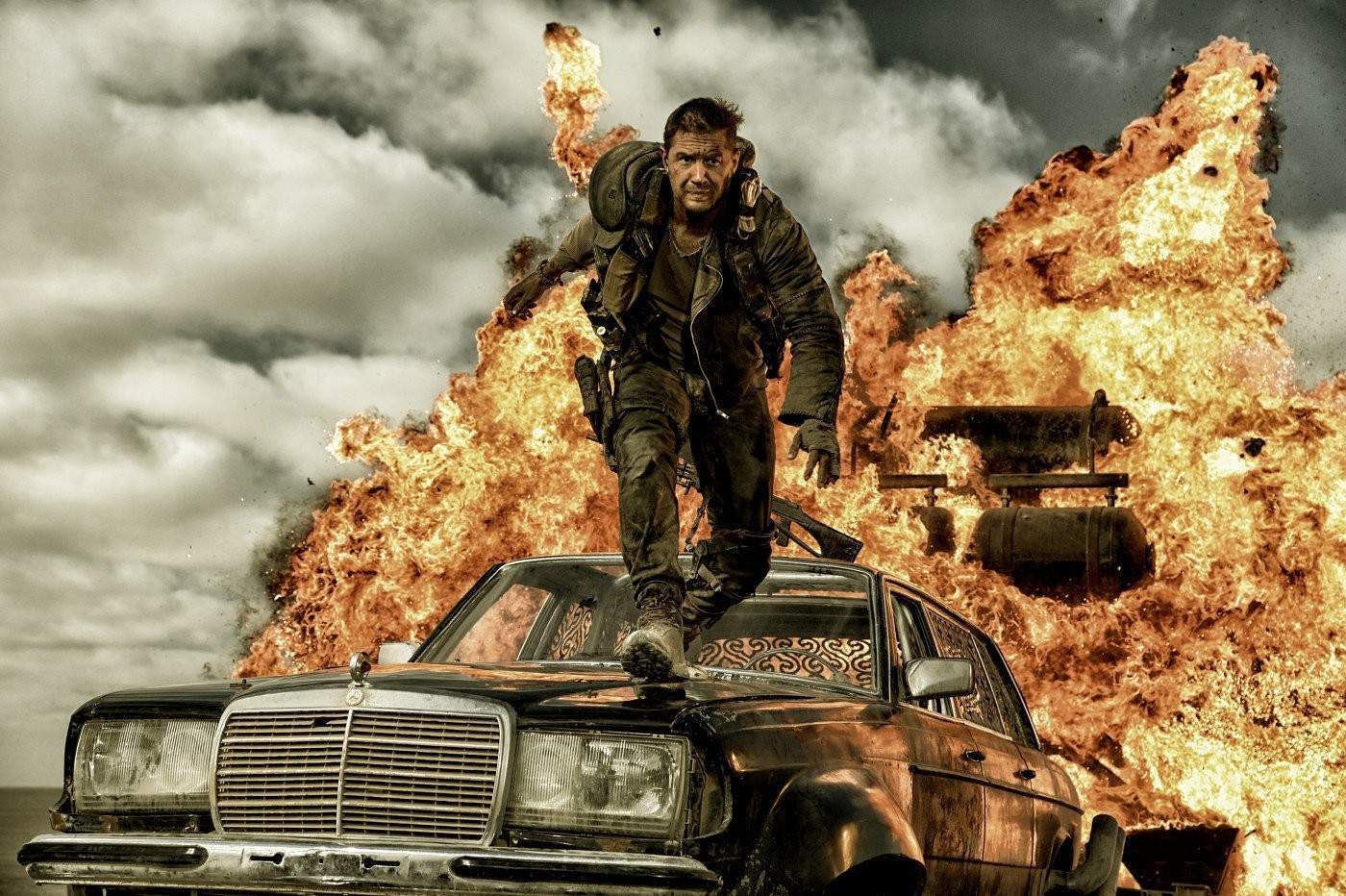 Nobody expected it. But in a culture ever too eager to revive the dead, it shouldn’t come as a surprise. Yet another pulp franchise has been wrestled back from decades past to once again grace the big screen — for better or worse. But of those shambling nostalgia-zombies, none have been as expertly re-realized as “Mad Max: Fury Road.” The premise is stupidly simple: a there-and-back-again tale of a post-apocalyptic loner who helps rescue a gang of princesses from a zealous warlord, during which the viewer is treated to every car chase scenario the mind can muster. While other reboots are content to languish in past glories, “Fury Road” provides a swift kick to the stomach. With nary a full paragraph of continuous dialogue uttered, it’s cinema in its purest form, it’s carnal, it’s surprisingly progressive — it’s the evolution of Director George Miller’s delirious vision from almost forty years earlier. Just go and watch it.

Will win: “The Revenant”

Best Actor in a Leading Role: Leonardo DiCaprio in “The Revenant”

The running joke that Leo has never won an Oscar has grown rather tiresome and needs to be laid to rest. Thankfully this year he probably will, and should, win best actor, at least by Oscar standards. After all, he’s paid his dues, suffered enough and sacrificed himself for the part of Hugh Glass, the fur trader and explorer who lived through a bear mauling and frigid conditions to return from the brink of the grave. Such a compelling tale calls for major personal investment on the part of the actor, and DiCaprio obliged by willingly relinquishing almost all human dignities. But perhaps the most troubling aspect about the role is that despite it being an impressive feat, it lacks underlying emotion. At times, the revenant is little more than a hollow ghost of a man surviving through the unthinkable. It asks the question: How do we truly measure superb acting? For the record, it’s nothing against Leo. He certainly deserves this one, but it should not simply be because he slept inside an animal carcass, eating raw bison for good measure. Otherwise, if it’s not already, the Oscar becomes little more than an empty gesture on the political battlefield known as Hollywood.

Will win: Leonardo DiCaprio in “The Revenant”

Best Actress in a Leading Role: Brie Larson in “Room”

In preparation for her previous dramatic role in “Short Term 12,” Brie Larson was granted a meager two weeks to throw things together. In contrast, for “Room” she was allowed six months of research and personal investment. The difference, surprisingly, is not in her visual performance, although she does shed all makeup and give herself up to a generally raw, stripped-down quality. It is, however, the unspoken nuances that are far more elucidating of her success. The minutiae, from writing diary entries as her character, picking the brain of trauma specialists and building rapport with her onscreen son over Legos, are all key components of her role. The allure is that none of this is overtly obvious, but it comes out organically in the character of Ma, giving her a depth that is extremely easy to overlook. However, it is precisely these accents that help add definition to this broken woman. Behind each person is an identity that cannot be contained in a single space. It spills over from an entire lifetime of memories and experiences.

Will win: Brie Larson in “Room”

Best Actor in a Supporting Role: Mark Ruffalo in “Spotlight”

In “Spotlight,” Mark Ruffalo leads a talented cast of actors through the streets of traditional Boston in 2002 in search of proof to take down the clergy on charges of rape. In a movie that deals with the very sensible topic of child rape in the Catholic Church, and is based on a true story, Ruffalo’s intensity and passion captures the journalist’s dilemma between letting emotions overwhelm him and presenting the facts in a sensible matter. His performance, overall, brings light to the profession of journalism and journalists’ responsibility to expose the truth with integrity and courage. Ruffalo also revealed that his dedication to the role led him to shadow the journalist Mike Rezendes from the Boston Globe in order to better his acting and as he explained, “to get that story right, otherwise it’s just going to be picked apart like a hunk of bread in a coy pond. It’s just going to be eaten alive.”

Will win: Sylvester Stallone in “Creed”

Best Actress in a Supporting Role: Alicia Vikander in “The Danish Girl”

Eddie Redmayne’s role as Lili Elbe in “The Danish Girl” is formulaic Oscar fodder: A man is consumed by a life-altering self-realization and bravely pursues it amid emotional and physical turmoil. Yet the story of Lili Elbe’s transformation is equally one about his wife: Alicia Vikander takes on the emotional role of Gerda Wegender, fulfilling a part that easily calls for the same immense emotional commitment as Elbe’s. But Vikander, whose character is often overlooked amid the hype of Redmayne’s Oscar buzz, does not stick to the same formula. Yes, she skillfully presents Wegender as a woman of overwhelming strength and understanding, and, yes, she captures emotional moments with an ideal balance of vigor and tenderness. But she goes above and beyond checking off the list of traits expected of a supporting actress starring in the biopic of an onscreen husband; she simultaneously devotes herself to Elbe without sacrificing her own character. Vikander assures that Wegender’s struggles are just as real as Elbe’s, dashing brilliant feminist commentary —casting a powerful female gaze on male portrait subjects — into scenes layered with complex sentiments. Vikander masters reluctant, unconditional acceptance and unwavering loyalty, making it all too clear that Elbe’s journey was not one taken alone.

Will Win: Alicia Vikander in “The Danish Girl”

Best Animated Feature Film: “Inside Out”

For the last two years, Pixar, which had dominated the Best Animation category since its creation, has left the Academy Awards empty handed. With “Inside Out,” Pixar has launched itself back into the forefront of animation and should  be rewarded for it with an Oscar. It is often said that art imitates life, but “Inside Out” is a work of art that in many ways explains life. The film is set within the mind of an adolescent girl, where her personified emotions have trouble guiding her through life after her family moves from her home in Minnesota to San Francisco. While we accept teenage angst as a part of growing up, “Inside Out” shows how emotions can run amok in your head, altering your memories and shutting down aspects of your personality. It is a brilliantly original film that any human with emotions can relate to. “Inside Out” uses storytelling and characters to illustrate the mysteries of human psychology and explains, in the simplest way, that it is OK to be an emotional wreck. By the end, you understand that you, too, are immune to the whims of your emotions, leaving the film with a feeling of wonder and catharsis.

Will Win: “Inside Out”

Poor Roger Deakins. He received his 13th cinematography nomination this year for “Sicario.” Yet it looks like he will still have to remain without a single win, as Emmanuel Lubezki is poised to win a third consecutive Oscar this year for “The Revenant.”

Lubezki has experimented with limiting the use of artificial light before. But for “The Revenant,” he completely eschewed it, instead planning shots around times of perfect natural light. With a masterful eye for composition and focus, every shot in this film could be framed and hung as a painting, with the cold simply oozing from the screen.

Even more impressive, while perfecting his use of light and landscape, he’s as talented as ever when it comes to intricate actions shots. The opening bandit attack of “The Revenant” is one of the finest tracking sequences since his car chase scene in “Children of Men,” seamlessly moving through the brutal fighting.

Will Win: “The Revenant”

What sets “The Big Short” apart from other “based-on-a-true-story” nominees is that it challenges its audience to not merely witness the events it depicts but to criticize them. Take, for example, 2013’s “The Wolf of Wall Street.” It is almost, from beginning to end, pure spectacle — a daring and noble ambition in itself. Adam McKay and Charles Randolph’s “Big Short” script, however, presents not only the suffocating spectacle of Wall Street but also alternatives and even objections to it. The film accomplishes this through its fascinating characters, each of which is written to be wholly genuine but distinct in his outlook: Some are ambivalent, others are angry. All of them, though, see the absurdity of the stock market America is slave to. With both comedy and drama, both ambition and balance, both anger and courage, “The Big Short” screenplay knocks down as tall an order as any of 2015.

Will Win: “The Big Short”

In 2015, Alex Garland made the daunting leap from veteran screenwriter to first-time director with “Ex Machina.” While he certainly should be commended for a marvelous job as a director, it shouldn’t be overlooked that “Ex Machina” also ranks as one of his finest manuscripts to date.

Yet it manages to be more than just a film for techno geeks. Garland’s pace enthralls, keeping the narrative steadily flowing with plenty of feigned twists and turns, and even some unexpected-yet-fitting humor (that dance scene!). As character study, not only is Ava, the primary AI in question, mesmerizing, but Nathan is an incredible creation, simultaneously a colossal asshole and perhaps the only “good” guy in the film. With a terrifying ending that serves as “Turing test” for the audience, Ex Machina is simply the best original script this year.

Even before the title screen and classic rolling intro, John Williams’ music takes viewers to the galaxy far, far away. What makes it Oscar-worthy is the smooth incorporation of classic compositions such as the “Force Theme” into this modern soundtrack. This definitive melody weaves throughout new songs such as “Rey’s Theme” and “Jedi Steps”. Williams approaches the reboot with a subtle, more mature style while keeping the playful musicality of his earlier work. The new pieces, just like the new characters,are complemented, but not overwhelmed, by familiar melodies. Teasing audiences with clever musical variations, Williams balances nostalgia and new material better than JJ Abrams does. Together, music and film become a sentimental introduction to a new generation of Star Wars steeped in reverence for the old. Surely, as the original soundtrack became part of our musical lexicon, these new themes will not only secure the award but will also end up in your whistling repertoire.

Will Win: “The Hateful Eight”

The “Star Wars” franchise has always been rich in visual effects, from its astonishing creatures to epic space battles. Visual effects and illusions have not only contributed to the production and storytelling in the films, but have also been  skillfully and artistically implemented in the films. The newest installment, “The Force Awakens,” uses technology and practical effects, like animatronics and vehicle rigs, to create Oscar-worthy visual illusions. These effects are used to enhance even the smallest details, making everything in this film look and feel real. For example, the bread that Rey eats early in the film, which forms from adding some kind of powder with a bowl of water, was done with practical effects, whereas using CGI would have been the obvious first choice. Even the fully CGI characters, Maz Kanata and Snoke, are remarkably lifelike. “The Force Awakens” is not glossed in gratuitous CGI, but rather uses CGI, combined with practical effects, to tell its story with as much visual detail and grandiose spectacle as a “Star Wars” film deserves.