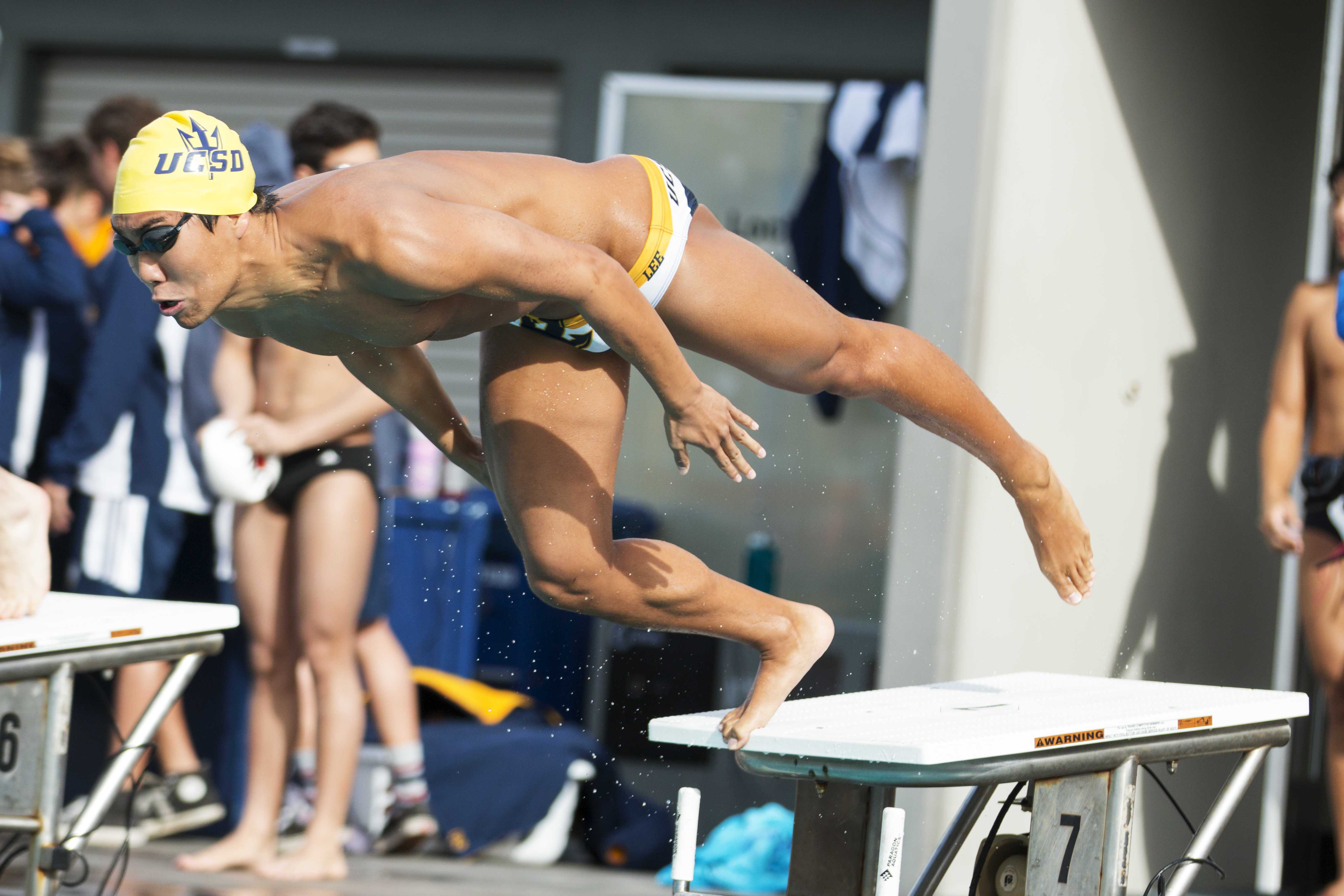 Over this past President’s Day weekend, from Friday, Feb. 5, to Monday, Feb. 15, the UCSD swimming and diving team competed and won the Pacific Collegiate Swimming and Diving Conference Championships in both the men’s and women’s divisions while breaking 12 school records and having some Tritons qualify for the 2016 NCAA Division-II Championships. The Tritons won the PCSC Championships for the eighth year in a row.

“Four years of blood, sweat and tears have culminated in the best meet of our lives, with many champions and 12 school records broken!” senior captain Cole Heale told the UCSD Guardian.

The Tritons started off the PCSC Championships on Friday with a bang as they were able to sweep all six swimming events and they were able to break multiple meet records, including three of four relays. This let both the men’s and women’s squads end the day with top standings in four of 21 events for each division. From a 10-team competition field, the women’s squad ended the day in first place with 307 points, with the closest competition in Pepperdine with 243 points. The men’s squad also ended the day in the first field but with a smaller competition pool, comprised of four other teams.

For the third year in a row, when the event was first added into the Championships, the Tritons completely dominated the 1000-yard freestyle. First-time conference-champion sophomore Haley Hamza won the event with a 10:07.00 for the women’s event and for the men’s event, junior Chandler Pourvahidi won the event with a 9:09.42 time for the second time in this event. Hamza was followed by freshman Reagan Eickert and the 2015 champion sophomore Stephanie Sin for the second and third-place finishes. On the men’s side, Pourvahidi was followed by the 2014 champion — senior Kyle Nadler — and junior Sasha Mitrushina. Hamza is now currently ranked second in all-time following Sin’s 2015 record (10:03.22) and Pourvahidi finished with a personal record and second in the Triton’s all-time record.

For the sixth year in a row, the Tritons were also able to sweep the 800 free-relay races behind sophomore Julia Toronczak, senior Maddy Huttner, redshirt senior Dari Watkins and junior co-captain Natalie Tang finishing off at 7:20.17, which broke the previous school record of 7:22.00 from the 2015 NCAA Championships. This time booked the foursome’s trip to Indianapolis next month as it was the first automatic NCAA qualifier for UCSD swimmers.

The men’s 800 relay was even more impressive, as they recorded a time of 6:35.00 that shattered the school record for the second time this season; they had previously brought in a 6:36.37 time beat the record back in November’s A3 Performance Invitational. The group of men that broke both records has remained the same and consists of junior Michael Cohn, Pourvahidi and seniors Michael Leung and Paul Li. Not only did they finish 16 seconds ahead of the closest competing relay, but Cohn was able to bring in a leadoff split of 1:37.39, breaking the previous record which has been untouched since 2009.

The Tritons were able to sweep the 500-yard freestyle, 50 free and the 200 free relay for both squads. Along with these wins, freshman Garret Tse, who won his first conference crown in the 200 individual medley, set a new meet record with 1:49.60, which actually beat one the record (1:49.71) of one of UCSD’s most esteemed former swimmers, Kurt Boehm. This record has been unbroken since 2005.

On Sunday, the third day of the PCSC Championships, the Tritons performed just as exceptionally, producing more titles and broken records. The day ended with UCSD women leading with 1126.5 points with their closest competitor Pepperdine far away at 763.5, and the UCSD men ended the day on smaller lead, as they led with 1103 points and UCSC followed with 937.

For the second year in a row, Wylder won the 100-yard butterfly, breaking both the conference and school record as he finished with a time of 46.97 in the morning preliminary and a time of 47.88 in the final. The PCSC record (47.91) hadn’t been broken in the past 16 years, and this also cleared him to participate in the upcoming NCAA Championships as an “A” cut.

Redshirt freshman Grant Crawford placed second in the men’s one-meter springboard competition with a personal-best score of 257.85 from six dives. Senior Garet Webster was able to end his four-year Triton diving career as he placed in fourth with a score of 214.65.

Monday saw the conclusion of the 2016 PCSC Championships, as the UCSD swimming and diving team came through with more amazing performances to win their eighth consecutive title in both the men’s and women’s divisions. The UCSD women’s squad finished at the top with 1573.5, winning by a margin of almost 500 points. The UCSD men’s squad won with 1592 points, with UCSC being the runner-up for the second year in a row at 1268.

The Tritons altogether broke and set 12 new records over the span of the four-day PCSC Championships. Among the accolades awarded, Cohn was awarded the PCSC Male Swimmer of the Meet and Coaches Corrie Falcon and Daniel Perdew were awarded the women’s and men’s Coaches of the Meet awards.

Cohn finished the 200 backstroke with a time of 1:44.92, winning the event two years in a row, breaking the school record (1:45.85) which he himself had set last March during his first NCAA Championships. Cohn broke the previous PCSC record (1:46.09), which was untouched for 16 years, and automatically qualified himself for the upcoming NCAA championships. He ended the meet with three individual wins in the 500 free, the 200 free and the 200 backstroke, having broken the school record for the last two events.

Watkins won the 200 butterfly with 2:01.33 and her preliminary swim time of 2:00.07 broke UCSD legend Alex Henley’s school record of 2:00.08 and also automatically qualified her for the upcoming NCAA championships.

“It was a blast swimming for this team and with my teammates one last time,” an emotional Leung told the Guardian. “To end my career with such an amazing group and another conference win was a great way to go out.”

After winning the PCSC Championships for the eighth year in a row, the Tritons now await the official announcement of the qualifiers for the 2016 NCAA Division-II Championships, which will be held on March 8–12.