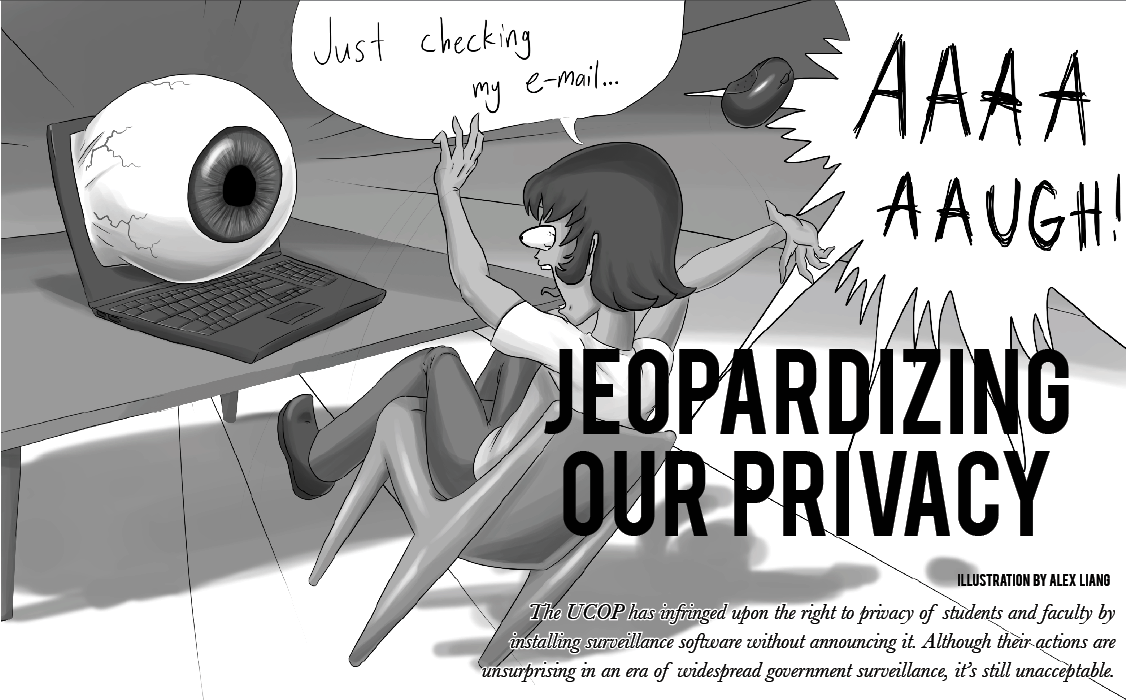 The University of California Office of the President appeared to have a busy summer installing surveillance software on all the university’s computers. According to the SF Chronicle, UC President Janet Napolitano ordered the installation of software that can save data from all incoming and outgoing emails in the entire UC system. It also tracks websites that computer users visit. This was done without informing the faculty and student population at each of the nine UCs. When several faculty members at UC Berkeley got wind of this information, they were understandably upset. UCOP has undoubtedly infringed upon the students and faculty members’ right to privacy with its implementation of surveillance.

The lack of transparency makes this especially abhorrent. UCOP gave no warning for the installation of security software as it began to monitor digital traffic in secrecy, according to the New York Times. Furthermore, no fair explanation of their decision has been provided. If it is necessary to track email correspondences — including personal web and email usage — there must be a reason for this security measure. Instead, there has been an utter lack of open discussion between UCOP and the public on this matter.

When confronted by 11 UC Berkeley professors demanding the surveillance program be halted, Napolitano’s staff responded with a five-page letter rife with excuses and weak justifications. On Jan. 19, they stated that “With respect to privacy, the letter and structure of the University’s Electronic Communications Policy reflect the principle that privacy perishes in the absence of security.” If this is to be believed, the public should be well informed on the basic practices of the security system. In stark contrast to feeling safer, the UCSD Guardian’s Editorial Board feels hoodwinked by UCOP. Since this system claims to protect our privacy, rather than infringe upon it, why has its development been cloaked in ambiguity?

From our perspective, security and privacy are two opposing forces that require a delicate balance of power, justice, discussion and — most importantly — honesty to function properly. Napolitano’s administration claims to act in the interest of the public good for the university without consulting either the students or faculty.

We believe that academic freedom and the liberty of privacy is also worth a little risk. UCOP has argued that the heightened security is a response to the cyber security attack at UCLA’s medical center last summer that exposed an ample amount of sealed medical records. While security breaches of data must be combated, UCOP offers a poor solution. We cannot protect our privacy by giving it away.

If anything, the UC administration should be designing a stronger email system with solid defenses against malware attacks. Instead, they have chosen to contract the security of our currently outdated email system to a third party known as Fidelis Cybersecurity, according to the New York Times.

Some will argue that it is perfectly reasonable for the university to monitor its faculty’s emails because that is, after all, how many companies function professionally. However, while most corporations keep track of their employees’ emails, the university is not a corporation and UCOP is not only tracking business emails. Historically, the privacy and respect of the academic community has been a vital component in its freedom of innovation and the invention and spread of new ideas.

This is the significant danger in academic surveillance. According to the SF Chronicle, some of the professors at UC Berkeley who voiced complaints against UCOP’s new email surveillance and cybersecurity program are concerned about the potential of the surveillance to restrict research that disagrees with public opinion or the university’s interests. Research data is a very powerful source of information with financial value that could be repressed or exploited by the administration’s watchdogs. This new cybersecurity program could also endanger professors who institute alternative teaching policies which the university disagrees with.

Sadly, it comes as no surprise that the UC administration is surveilling our email. Americans are all too familiar with governmental surveillance since the emergence of the Patriot Act and whistleblowers like Edward Snowden. But our complacency does not make UCOP’s privacy infringement acceptable. It is disheartening that the general response of the UC community to this blatant surveillance will likely be a shrug and a brief eye roll. But we should not underestimate the wisdom of those professors who felt this was an act of secrecy that must be addressed and opposed. In times of political turmoil and revolution, the freedom to communicate without governmental interference is a crucial vehicle for compelling change and reform.