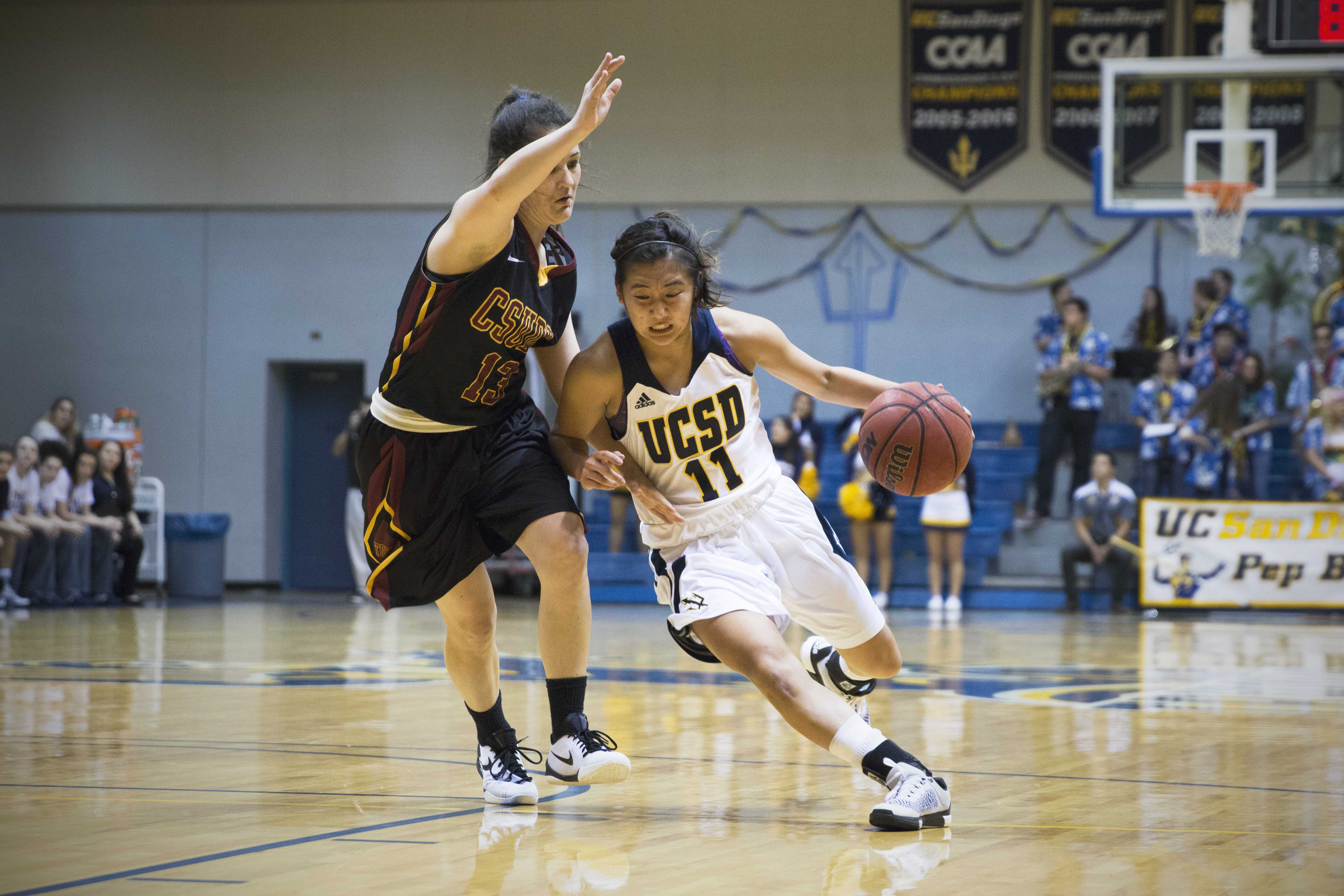 The Triton women earned two solid road victories against two California Collegiate Athletic Association opponents, Humboldt State and Cal Poly Pomona. First on Thursday night, the UCSD basketball team defeated Humboldt State 76–51. Humboldt State drops to an 8–11 record on the season with a 5–7 record in CCAA play. Then, on Saturday, UCSD defeated the Cal Poly Pomona Broncos, 64–50 at Kellogg Arena. The Tritons are now 17–3 overall and 12–2 in CCAA play. UCSD is currently ranked second in the conference behind Cal State Dominguez Hills, which has not lost a game against any conference opponent this season, making its CCAA record 13–0.

UCSD disposed of the Humboldt State Lumberjacks 76-51 on Thursday night.

Senior guard Jamie Katuna scored a game-high 28 points with a 66.6 percent shooting percentage from the field for the Tritons. Katuna also went a perfect 5–5 behind the free-throw line.

UCSD came out strong, scoring the first five points of the game. The Tritons controlled the game for the entire first period, as they entered the second period leading the Lumberjacks 21–10.

“Our defense set the tone from the beginning,” UCSD Head Coach Heidi VanDerveer told UCSD Athletics. ”We were able to dictate the tempo of the game.”

The Lumberjacks came out strong in the second period, cutting the deficit to only three-point in favor of the Tritons making the score 23–20. But UCSD never took its foot off the gas as it kept the lead going into halftime 36–29.

Humboldt State reduced the Tritons’ lead to three points again at the start of the third period. The Tritons answered back, scoring seven-unanswered points, making the score 49–39 with 1:49 left the in period.

The Tritons dominated the entire fourth period outscoring the Lumberjacks 27–11, making the final score of the game 76–51.

The Tritons continued their road trip and headed to Cal Poly Pomona for another CCAA matchup.

It was an exciting first half as the Broncos kept the score close, taking the lead and tying the game up a couple of times. But it was a whole team effort from the Tritons that eventually earned them a “W” on Saturday night, as eight different players scored.

Junior guard Beth Mounier led the Tritons with a game-high 18 points, with four three-pointers during the night. Katuna had 14 points with three three-pointers while sophomore guard Taylor Tanita had a game-best seven assists. Shokoor collected her 11th double-double on the season with 12 points and 14 rebounds.

UCSD jumped out in front to begin the game with a layup from junior guard Haley Anderson. The Tritons hit four shots from behind the arc in the first period, from freshman guard Joleen Yang, Mounier, Katuna and Shookor. Cal Poly Pomona held a steady pace throughout the first period, keeping up with the lively Triton offense, only being down by three going into the second period, making the score 18–15. Cal Poly tied the game up, 21–21, with 5:08 left in the second period, before the Tritons grabbed the lead once again thanks to a Shokoor free-throw and a Mounier three-pointer. UCSD led the Broncos 29–25 going into the third period.

The Tritons kept the lead for the entire third period, making the score 45–40 going into the final frame of the game. UCSD outscored the Broncos 19–10 in the final 10 minutes of the game, securing their 17th win of the season, with a final score of 64–50 in the Tritons’ favor.

“I’m very excited about our team’s win,” VanDerveer told the UCSD Athletics Department. “Pomona tried to slow down the game and take advantage of their strength. They have a dominant low-post game and we did a great job of keeping our poise.”

UCSD will continue its CCAA play next Saturday, Feb. 6, as it travels to Cal State San Bernardino. Tip-off is set for 5:30 p.m.