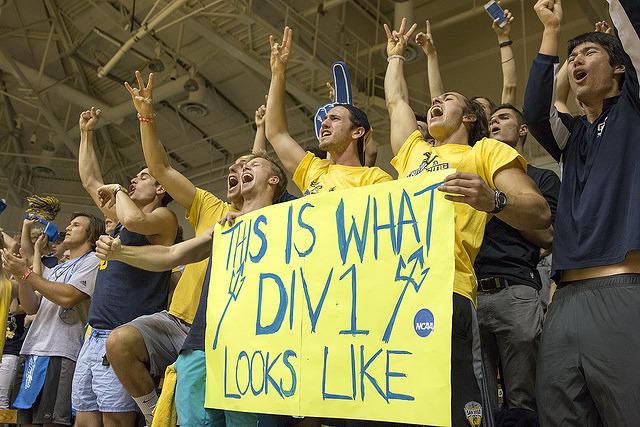 Members of A.S. Council unanimously voted during tonight’s meeting to hold a student body election that will decide whether or not UCSD will facilitate a transition from NCAA Division-II to Division-I athletics. The special election to increase student fees by $160 per quarter starting Fall 2016 will be held during Week 8 of Spring Quarter.

Former national ESPN sports commentator and UCSD alumnus Beth Binger told the UCSD Guardian the transition to Division I will improve the university’s academics as well as its athletic presence.

“[The long-term effects of going Division I] will be tremendous,” Binger said. “It will pull more alumni back to campus, just by virtue of the profile of Division I, which will hopefully lead to more giving. Ultimately, what we’re most interested in is funding student scholarships and continuing the excellence of students, both academically and athletically. Division I will help do that, while giving students who are superior athletes a platform, a level playing field, with their peers.”

“We deserve the chance to be excellent and we deserve to be recognized for our excellence,” Daley said. “Moving to Division I will provide that visibility and allow all areas of the UCSD community to be recognized [by the public] in the way that we recognize ourselves already.”

“It is so important for students to have a chance to vote on this and realize that it’s not just about the four years that you are here,” Bezzerides told Council. “It’s about the legacy that you, as future alumni of this institution, will carry with you forever.”

Eleanor Roosevelt College senior Joey Tompkins said that though he will be graduating in June and will not experience attending a Division-I university during his academic tenure, he is optimistic about the impact the change will have on future generations of Tritons.

“Our student athletes work very hard balancing academics and athletics year-round on a daily basis,” Tompkins commented. “I definitely believe they should be recognized for that level of commitment to their sports and academics.”

Engineering alumnus Ping Yeh, who received a bachelor’s degree from UCSD in 1999 and a master’s degree in 2001, described his experiences as a student on campus and the legacy his class left behind; Yeh asked Council members what they want to leave behind. Yeh cofounded the Triton Engineering Student Council, which still hosts the Disciplines of Engineering Career Fair every year. His graduating class gifted the university the 750-pound bronze statue of King Triton that stands in front of Price Center.

“When I walk on campus and I now see people taking pictures with the [Triton] statue, I smile with pride, because that’s something that my class built — we did that,” Yeh said. “But when I look beyond the statue and see Price Center and RIMAC, I feel thankful because previous generations paid for those [amenities] so that the next generation could benefit.”

“I’m skeptical that going to Division I will help build student support, especially when students will be asked to pay hundreds more per year in fees,” Olson wrote in a comment on the Guardian Facebook page. “I respect that this is the students’ decision. Please choose wisely and consider that there are other ways to accomplish your goals without going to Division I.”