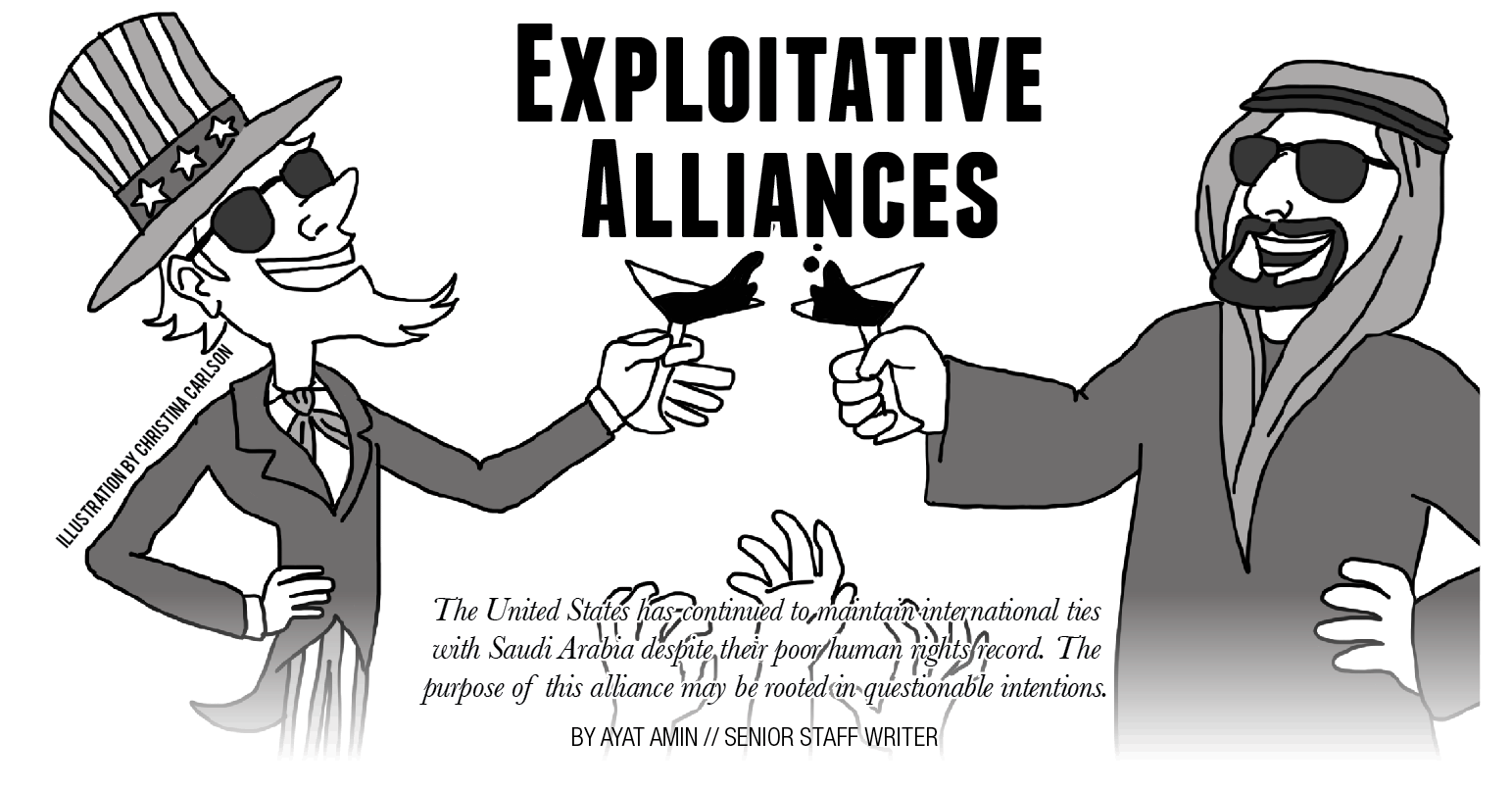 The United States has been supporting a country, that, at its core, is contradictory to everything America stands for. Saudi Arabia is not free, democratic or equal to its citizens, three qualities that are integral to American values. Oil and politics might seem like logical reasons for the alliance, despite differences in beliefs. However, if one looks at recent history, these aren’t really factors any more.

Ever since the first oil deal with Saudi Arabia in 1933, the United States has been a strong ally to Saudi Arabia over oil. But since the diversity of the global oil market in the mid-20th century, oil is no longer a big factor. In fact, for the latter half of the century, it was Cold War politics that brought Saudi Arabia and the United States to the same side. The Saudi government, a monarchy and a theocracy, made them natural enemies of the communist Soviet Union and thus a natural United States ally, according to Vox News. As we move into recent years, Saudi Arabia and Iran have become two big opposing powers in the Middle East, each vying for dominance and each backed by United States and Russia, respectively.

Yet just because an alliance was made during the Cold War doesn’t mean that it’s a good reason to continue that alliance. The Cold War ended over 20 years ago, and the United States’ interests in the Middle East have shifted. Iran is no longer a hard-cold enemy, as demonstrated by Obama’s 2015 nuclear peace deal. And with the aftermath of Iraq and the entrance of Obama, the United States has shifted more toward letting Middle Eastern countries determine their own democratic government, advocating for peace for civilians. In other words, the American interests contradict Saudi Arabian interests against Iran. For example, in Egypt, where Saudi Arabia and Iran have a proxy war, the United States supports the democratically elected Muslim Brotherhood, while Saudi Arabia opposes them as Gregory Gause, a University of Vermont Policy Professor, writes on Law Fare Blog. Gause also talks about Syria, where Saudis see the removal of Bashar al-Assad, supported by Iran, as their bigger priority in the country.

Ever since the first oil deal with Saudi Arabia in 1933, its alliance with the United States has remained strong. Yet after so many years to think the relationship over, it’s time for United States to stop and ask itself why we are still friends with a country that has such a poor human rights record.

If people have doubts that the United States still supports Saudi Arabia, then they should look at the recent actions of Congress. As NPR reported in December 2015, the U.S. State Department just approved a $1.29 billion arms sale, effectively providing Saudi Arabia weapons that it will use to violently further its interests in Yemen.

The United States obviously has a strong relationship with Saudi Arabia even today. Yet the more one thinks the relationship over, the less it makes sense. Freedom House, one of the leading organizations collecting data on the freedom of countries, consistently gives Saudi Arabia a freedom score of seven (the worst and lowest possible score). Human Rights Watch points out that the Saudi government withholds human rights to women, migrants and those imprisoned. Saudi Arabia is already infamous for its denial of rights to women, but its migrant workers are constantly subjugated to conditions like confinement, non-payment of wages, food deprivation and all types of abuse providing some of the worst working conditions in the world. Saudi Arabia’s criminal justice system has laws that allow persecution for broad crimes like “breaking allegiance with the ruler.” These are all evidence from Human Rights Watch report clearly indicating a lack of equality and democracy in Saudi Arabia.

Now that we are all caught up on the Saudi-United States history, some questions still remain. Yet by now, the answer should be clear: There is no real reason anymore. Saudi Arabia and the United States might have been allies in the past, but the world’s changed now, and there’s little reason for the relationship to go further. The bad news is that as the U.S. grows farther apart from the Saudi Arabia, it will likely lead to more turmoil in the country and thus the Middle East. But in order for Saudi Arabia to ever be a future ally the U.S. can actually be proud of, we must break the relationship now. We can’t continue to coddle a country whose values and actions  are anti-American at its core.