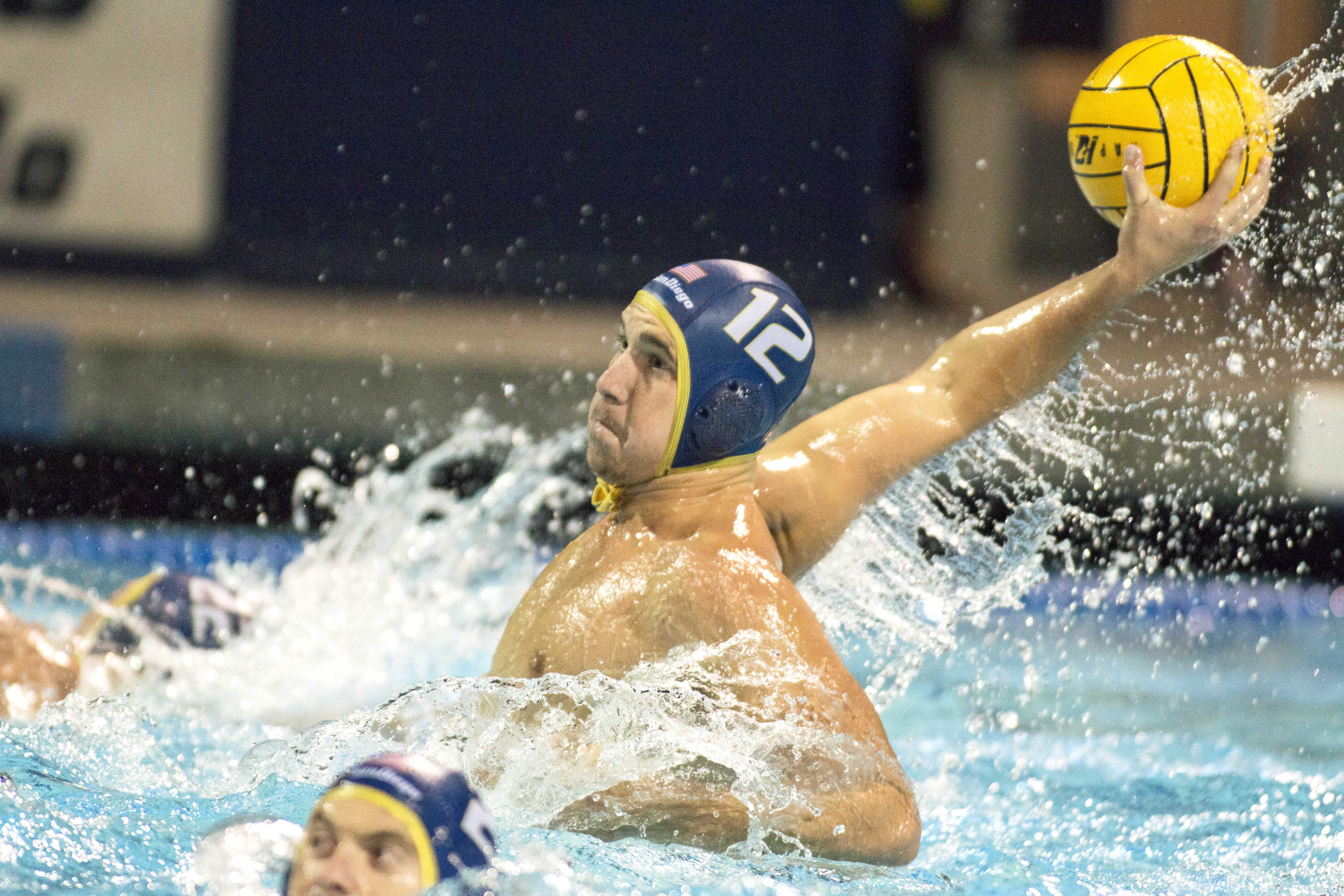 No. 16 Tritons bested by top-ranked UC Davis and UC Santa Barbara at home.

The UCSD men’s water polo team suffered two tough losses this week to UC Davis and UC Santa Barbara. The No. 16 Tritons lost 8–7 to No. 10 UC Davis on Thursday as junior driver Nick Alexander’s game-tying shot was saved by the UC Davis goalkeeper in the final seconds. On Saturday, the Tritons fell to No. 6 UCSB 16–14 in a close overtime match. UCSD gave up four goals in the extra period and couldn’t gather enough offense to win the game. With the two losses, the Tritons’ record is now 11–13 overall. Both matchups were played at Canyonview Pool.

UC Davis scored first as senior two-meter Wes Lincoln buried a shot in a six-on-five power-play goal. The Tritons responded with another power-play goal, as well as Alexander teaming up with redshirt freshman driver Cole Martinez for the goal. UC Davis added on two more scores in the opening quarter to maintain a two-goal lead.

In the second quarter, the Tritons responded as senior two-meter Tyler Mancuso scored twice in the early minutes. Junior utility Jack Ellinthorpe added another goal to give UCSD its first lead of the game. UC Davis answered with two goals to take back the lead, but Ellinthorpe found the back of the net with 36 seconds left in the period as the two teams went into halftime tied 5–5.

As great as the two offenses were for the first half, both struggled to score in the third period. Each team only had one goal in the period as junior utility Nassim Hmeidan gave UCSD the lead but freshman utility Sasa Antunovic scored with 42 seconds left to tie the game at six.

Antunovic scored again to start off the fourth and final period. Mancuso answered on the next possession with his third goal of the match and tied the game for the sixth time. Senior utility Sean Grab scored with 2:17 left in the match, and that proved to be the game-winning shot as the UC Davis defense stifled the Tritons on their possession.

Mancuso had his fifth hat trick of the season as he led the Tritons with three goals. Ellinthorpe finished with two goals of his own, and redshirt freshman goalkeeper Jack Turner had nine saves.

UCSB started the game with a quick 3–1 lead. UCSD answered with senior utility Chase Cockerill’s penalty shot. The Gauchos scored again to add to their lead, but Alexander assisted Cockerill for his second goal of the period and the Tritons trailed by only one after the first period.

Mancuso scored in the second period after UCSB had taken a two-goal advantage. The Gauchos scored twice to make it a 7–4 advantage. However, UCSD finished the period strong with two goals to go into halftime down only one.

The Tritons got on the scoreboard early in the third period as Alexander and Hmeidan scored to give UCSD its first lead of the game, 8–7. That lead was short-lived, as UCSB answered with three straight goals to take a 10–8 lead. Cockerill continued his brilliant match with two more goals before the end of the period to tie the game.

The two teams had two goals apiece in the final period, as the game headed to overtime knotted at 12–12.

UCSB took a two-goal lead to start off the overtime period. Hmeidan answered with 15 seconds left in the first overtime period to give himself a hat trick for the game.

The Gauchos added two more goals in the second overtime period to add to their lead. Senior two-meter Tiki Toplack scored with 29 seconds left, but the deficit proved to be too much as the Tritons fell 16–14.

“We played a lot better water polo against a solid sixth-ranked team in the nation, “ UCSD Head Coach Denny Harper told the UCSD Athletics Department. “I am pleased with the progress.”

Cockerill led the Tritons with five goals, with Hmeidan scoring three and Mancuso two. Freshman goalkeeper Sam Thompson had his first start of the season and performed well with eight saves.

“I loved the effort,” Cockerill told the UCSD Athletics Department. “We are really stoked for our freshman goalie. We are a young team, and we have freshmen stepping up.”

The Tritons have a week off before two exhibitions against Sunset San Diego and Olympic Club on Saturday, Nov. 14 at 10 a.m. and 12 p.m., respectively. A week after that, UCSD will head to Colorado for the WWPA Championship, hosted by the Air Force, Friday to Sunday on Nov. 20 to Nov. 22.