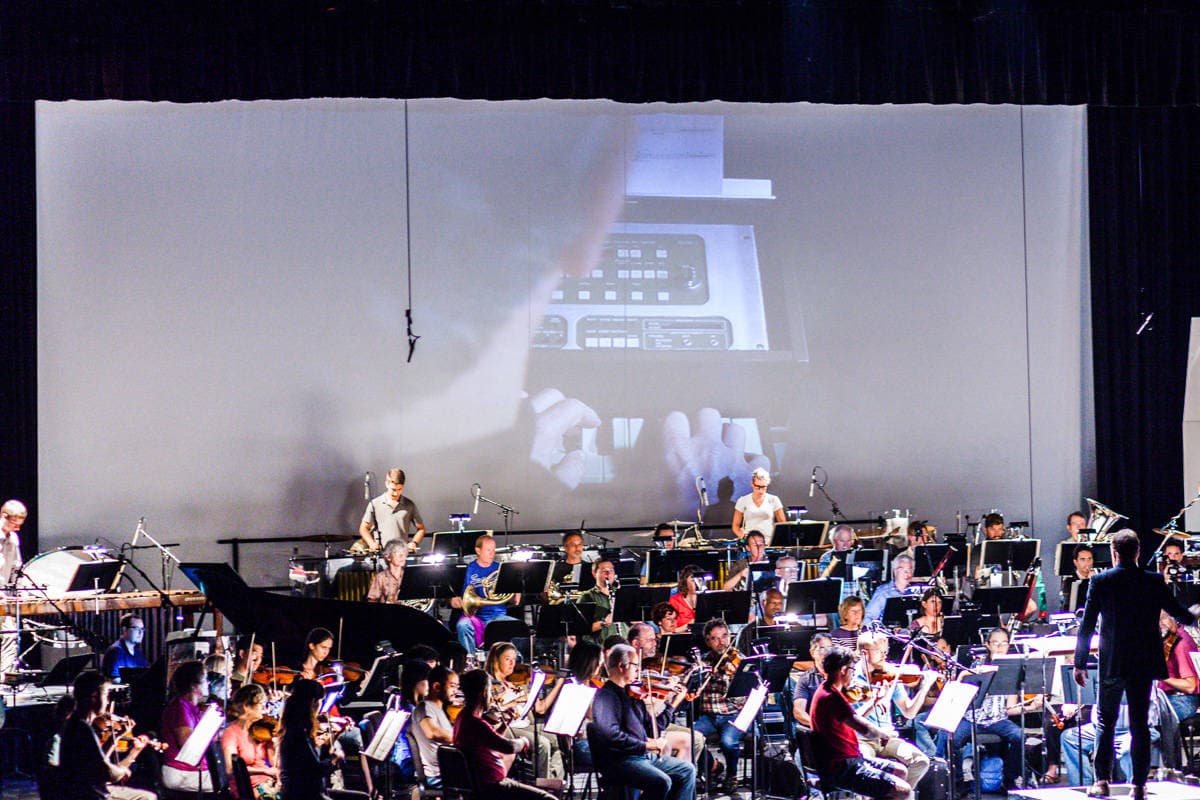 On the weekend of May 2, the walls of Mandeville Auditorium were converted into the panoramic windows of Geisel Library, and those with tickets to the La Jolla Symphony were transported from a dark theater to spacious study rooms via a video that captured the emerging moon from across campus: a fitting transportation for the premiere of “The Moon in La Jolla,” Hong Kong-born Yeung-Ping Chen’s telematics orchestral piece based on a poem of the same name.

Chen, an award-winning composer and current UCSD Ph.D. candidate in music composition, relied on telematics technology to create the impression of space in his composition. Using a program similar to Skype, he paired an orchestral arrangement in Mandeville Auditorium with the bells of a carillon simultaneously being played by soloist Scott Paulson in Geisel Library. Images of Paulson were shown on giant screens, which acted as a backdrop for the La Jolla Symphony Orchestra, and the accompanying bells of the carillon were broadcasted throughout the theater via the Internet.

“I put the speaker on the ceiling of the hall so that people will feel like they are inside the library,” Chen told the UCSD Guardian.

The result was a stunning “tele-concerto,” an arrangement that managed to convey a sense of vastness, despite working to condense the gap between two places.

The distance conveyed in the poem “The Moon in La Jolla” is one Chen can relate to. Leung Ping-Kwan, the Hong Kong poet better known by pen name Yasi, is the author behind Chen’s inspiration. Read on April 21 at a pre-concert exhibition celebrating April’s National Poetry Month at Geisel Library, it is one that attempted to find the likeness between two different places and languages.

“The poem is by a poet who came from where I am from — he is a Hong Kong poet who studied at UCSD and wrote the poem when he was in his first year. The poem is about the uncomfortable feeling he had in a foreign place,” Chen said. “He had to use another language to describe the image that he wanted to describe in Chinese, so I feel that the particular poem called ‘The Moon in La Jolla’ is also about the difference and the challenge of translating languages.”

In his composition, Chen captures this uncomfortable feeling as he creatively expands the area of the theater. But he softens this distance by using an instrument he says “recalls certain memories” to revive a sense of nostalgia he’s since developed for his time spent at UCSD.

“I hear the sound of the hour when I am on campus, so the carillon sound contributes toward the feeling and the memories that I have of UCSD,” Chen said. “I think that it is a special instrument, and I love the spectacular architectural design of the library. That building is the icon of UCSD, so I think that it’s meaningful. And my piece is for celebrating the school, so using the famous library and the instrument made a lot of sense.”

Chen also hopes that, by capturing and sharing the feeling of having to search for familiarity in a foreign place, his piece will impact and celebrate the lives of international students on campus.

“I always found it interesting to have the feeling of distance integrated into the composition, so I think using the experience of being at UCSD — where I am so far from my home — helped me to understand more about that kind of feeling,” Chen said. “I think that my musical language will help people to understand the experience of being an international student at UCSD.”

Following the premiere of his tele-concerto, there’s no doubt that Chen achieved the sensations of distance and space he set out to capture. The carillon bells resonated throughout the auditorium in a striking complementation to the ambitious orchestral arrangement in the theater. The video of the library and the carillon player quickened with the tempo of the piece, creating a satisfying union of powerful visual aesthetic and audio. With his remarkable use of telematics technology and his ability to develop and control different atmospheres through music, Chen’s intent to deliver a powerfully emotive work of art in his “The Moon in La Jolla” shines through the night.