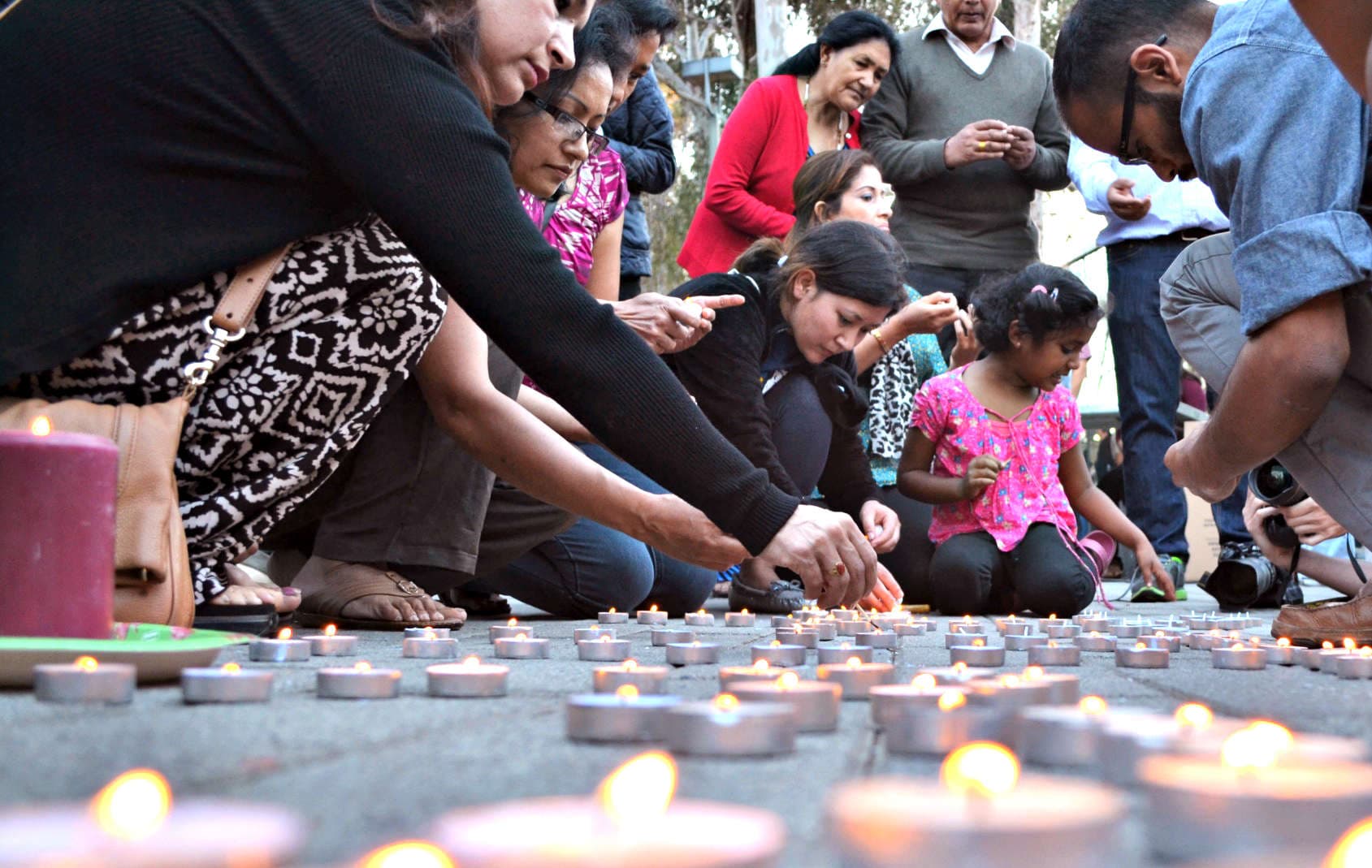 Hundreds of students gathered in front of Geisel Library on Tuesday night to hold a candlelight vigil for the victims of the Nepal earthquake. The Nepalese Student Association organized the event and collected donations to contribute toward disaster relief.

The night began with students and community members lighting candles on the ground, which were arranged to spell “NEPAL” in both English and Nepali.

NSA President Shreyash Bhattarai opened up the formal portion of the event by thanking those who are contributing to the relief.

“I am so proud to be a human today because we are supporting something that is happening on the other side of the world,” Bhattarai said.

Bhattarai then called for the attendees to participate in a minute-long moment of silence to honor the earthquake victims and their families.

“I started sending emails out Saturday as soon as I woke up and became cognizant of this,” Gonzalez said. “Students stepped up and said, ‘We shall make a difference. We will remember our families and friends.’ And so to them, I stand in awe and with great gratitude.”

The earthquake occurred near Nepal’s capital, Kathmandu, on Saturday with a magnitude of 7.8 and has led to more than 5,000 deaths and 10,000 injuries. However, Nepalese Prime Minister Sushil Koirala warned that his nation’s death toll might actually end up closer to 10,000. The earthquake also triggered an avalanche on Mount Everest that killed at least 18 climbers.

One of those climbers was UC Irvine alumnus Dan Fredinburg, a 33-year-old Google executive who was there on a company-sponsored expedition.

Moreover, four San Diego residents who traveled to Nepal for a hiking trip are currently stranded in a Nepalese village and only have approximately a day’s worth of food left. One of the hiker’s sisters told NBC San Diego that the four of them are essentially running a rescue camp of about 30 people. Another San Diego resident, 21-year-old Spencer Dickinson, managed to call his family on Tuesday night and confirm that he is alive. Dickinson had been missing since the earthquake and will be air-lifted out of the base camp soon.

“I am really happy that we were able to do our event successfully,” Oli said. “Everybody came and helped us out in this time of need. We hope to gain continued support from the UCSD family and Nepalese community.”

The United Nations, which reported that the earthquake has affected over 8 million people, released $15 million from an emergency fund to pay for water, medical supplies and shelter.

Oli added that the UCSD community can participate in the humanitarian effort to bring relief to Nepal by making monetary donations on campus. The NSA has set up a donation box on Library Walk where students can donate whatever they can, according to Oli.

Donors can receive tax deductions for their contributions, which will go through local non-profit organizations, including One Step and Shikshya Nepal. In addition, the NSA is partnering with the Nepal Red Cross Society and similar organizations. Donations can also be made online at http://www.helpnepaltoday.org/.