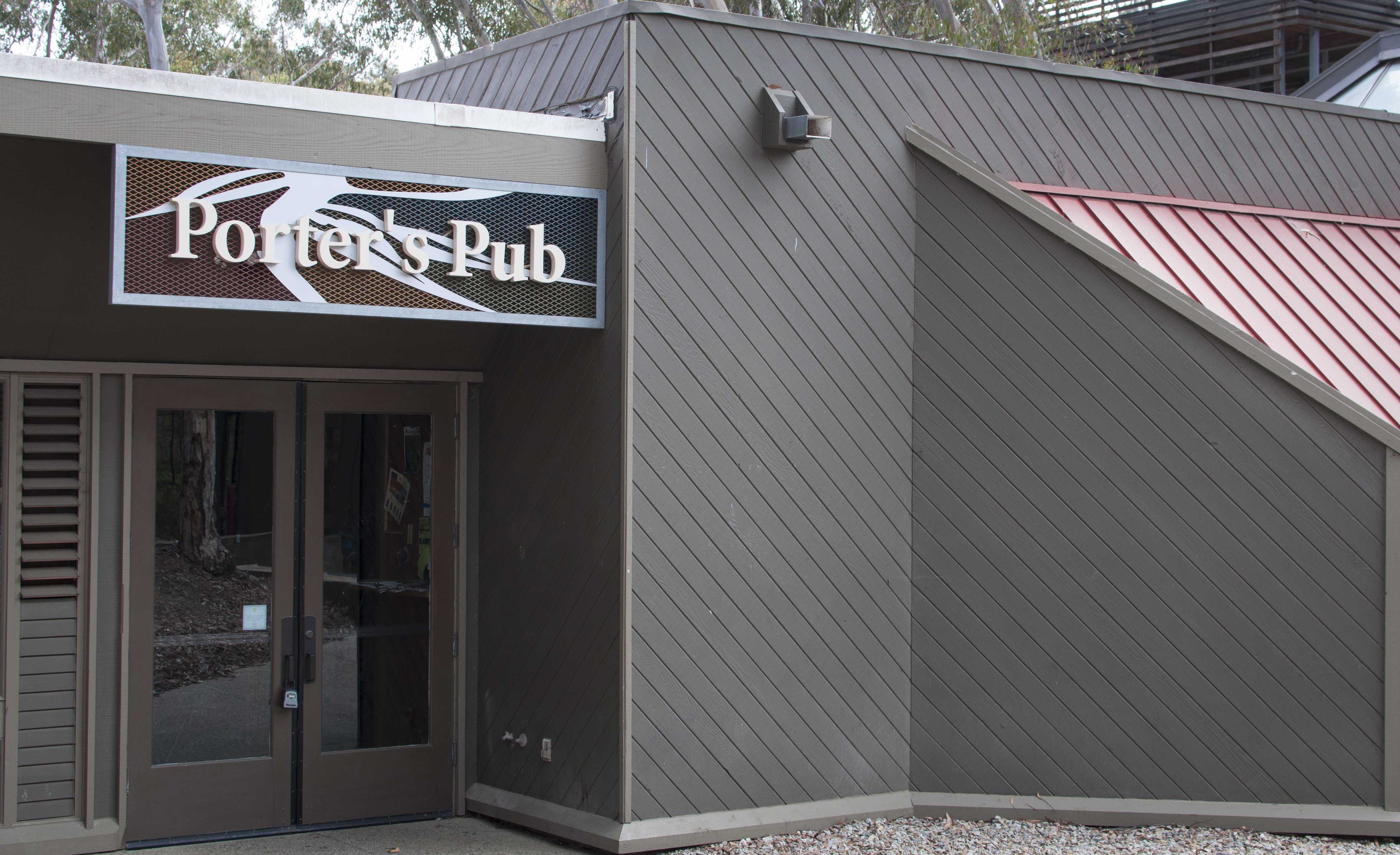 After 22 years of serving our campus, Porter’s Pub is closing its doors on June 30 of this year.

UCSD is full of little treasures buried throughout its far-reaching, 2,000-acre campus. There’s the oddly amusing “Stars Wars” door hidden behind the Visual Arts Building that makes a warped, light saberish noise when you kick it exactly in the right spot (marked vividly by an oval of missing paint). Sitting quietly next to Center Hall, there’s the Friends of the International Center resale shop, which, behind its pillars of flashy blouses out front, often houses lab coats and safety goggles for as cheap as $5.

But the number of these treasures has been dwindling steadily as the years go by. Marching in line behind the closure of the Crafts Center, the cover-up of Graffiti Hall and the ongoing battle to evict the C.H.E. Cafe, Porter’s Pub will be the next UCSD treasure on its way out — this time to the tune of farewells from students, graduate students, alumni and staff members alike.

Nestled within the forest of enchanting eucalyptus trees, Porter’s Pub lives at the heart of the Original Student Center, where it joins arms with surrounding student co-ops in preserving some of the last independent business spirit left on campus. The pub was initially student-operated: Robert “Rob” Porter, a UCSD alumnus and the pub’s namesake, established the venue in 1993 and managed it alongside his student employees for 15 years. By the end of the 2000s, the reins had been turned over to Stephen Lawler, Porter’s friend, whose investment had saved the pub from collapsing under expensive renovation demands from university administration.

Alongside organizations like the General Store and the Food Co-op, the pub has brought the campus its own flavor — the original kind of flavor you get when you informally mix multiple streams of soda together at the soda fountain; the end result is not the most orthodox product, but it can be surprisingly delightful, and its formula is one that can’t be recreated.

The same can be said for the management of Porter’s Pub, which many customers insist is integral to the pub’s homey atmosphere and welcoming environment.

“Stephen brings a different flavor here, and I think that deserves to be shown,” Erik Rodriguez, a postdoctoral scholar in biochemistry and a regular Porter’s customer, said. “None of us are flawless, and none of us can be perfect at all times. Stephen tries his best, but he cares about everybody.”

Rodriguez is one of the most commonly sighted customers at Porter’s Pub — the employees consider him family. His warm presence and jovial attitude draw many one-time visitors to the back patio of the pub, where the motto is, “You always have friends in the corner.”

“I met all my good friends here,” Rodriguez said with a grin. “I’ll just go up to people and say, ‘My friend just got married, and I need new friends.’ That’s how I’ll introduce myself. … As long as you’re a good person, you can hang out with us. Everybody deserves to be here. Everybody deserves to be talked to and to be treated nicely, and there’s no bad feelings here.”

Like many of the other regulars, Rodriguez values Porter’s Pub for being an open social forum inside a notoriously unsocial campus. Inside the pub, campus members can meet at the intersection of their communities and shed their distinguishing demographic labels for the sake of good conversation. There are few other places on campus, customers say, that allow such freedom.

“A lot of people wouldn’t meet as many friends if it weren’t for this place,” Rodriguez said. “For me, I’m a postdoc, and I wouldn’t randomly go up to people in Price Center and start talking to them. A lot of people don’t even know what a postdoc is. But here, I’ll hear people talking about science and think, ‘Oh, I can talk to you about that.’”

Economics and history fifth-year student and Porter’s employee Trevor Holleron began visiting Porter’s Pub regularly in the early years of his UCSD education, but his sentiments toward it became stronger when a recent hardship struck and left him in an uphill battle for support. His friends at the pub were the ones that pulled him through.

“I remember the time Stephen gave me a job,” Holleron said. “My dad was in the process of dying, and I needed a job to pay for [his cremation]. I was all by myself. … [Stephen] was like, ‘You need a job? Can you work hard? Can you put in the hours? Okay, yeah, sure.’ And I remember he gave me a hug, and I didn’t want a hug, but still he gave me one. … He’s always made sure I’m taken care of.”

Holleron added how special his experiences were as an undergraduate.

“You know how UCSD is,” he said. “It feels like you’re suffocated by the academic focus, and what’s ironic is that you come to Porter’s Pub at the end of the day and you still end up in an academic atmosphere, but at the same time it’s chill, not judgmental and has a free-thinking vibe.”

Respect and adoration for Lawler is the paean sung throughout the pub. From throwing birthday parties for security guards to inviting isolated researchers over to his home for Thanksgiving, the customers recounted myriad instances of Lawler giving back to the UCSD community, particularly to groups who struggle to find inclusion elsewhere. One of those groups is the student veterans.

“There is not much support for the veteran population on campus,” Holleron, who has also served in the armed forces, explained.

On Thursdays, however, veterans are given a free lunch at Porter’s Pub.

Other student groups have also found refuge within the pub, including organizations like The Graduate Student Association and the Brewing Club, seeking a convenient spot to hold meetings. Circle K has used the location multiple times to prepare for its “PB&J for the Homeless” events. Otherwise, students come frequently to study during finals.

“[Lawler is] not even making money [off of these groups] because they’re not buying beer most of the time, but he allows them to do [their events] here,” Rodriguez said. “He does a lot of [charity] events here, but people don’t see it.”

Rodriguez recalls one of his favorite events to be the Thrift Trunk Show, which brought together several vendors at Porter’s Pub to sell thrifted apparel at discounted prices. He also mentioned karaoke nights, movie nights, dances, concerts and open mic nights as some of the many events the pub hosts, many of which allow students to display more experimental work with fewer restrictions than more “mainstream” stages.

But Porter’s Pub is more than a stage. It’s more than a few tables to sit at and play cards on. It’s more than a convenient stop to grab a beer between classes. For its regulars, the pub is a home, a welcoming social and cultural experience that continues to draw them in over and over again.

Meet Brandon Mosley — or if you’ve ever been to Porter’s Pub after sundown, you probably already have. Mosley is the vivacious evening bartender, who, despite often working shifts alone, tries to engage the entire pub’s clientele in conversation with his outgoing spirit.

Mosley has been working at Porter’s Pub for two years, but his bartending career began 10 years ago. Hailing from New York City, Mosley has worked for high-profile individuals like P. Diddy at Justin’s Restaurant and Ashton Kutcher at The Geisha House.

And yet, he contends that working at Porter’s Pub is the best job he’s ever had and finds it hard to face the reality of leaving soon.

“There’s something special about this place,” Mosley said. “A two-person dinner has never been less than $200 anywhere else I’ve ever worked, and, of course … [Porter’s Pub] is a lower level of industry than I’m used to dealing with. However, the people I meet here are so interesting. I’ve met some of the smartest in the whole world just working here.”

Part of what makes the pub special to Mosley is the dedication from the management to offer the regular customers a place to go. Mosley explained that, despite exceptionally slow business when most students are on break, Lawler still keeps the pub open in the summer.

“[This] is serious because he’s losing money for two months out of the whole summer in order for our dedicated customers to have a place to go,” Mosley said. “And you’re not going to find that type of dedication no matter who else you bring in here. That’s why people have that family-type feeling about this place.”

Until its lease formally expires on June 30, Porter’s Pub will carry on with business as usual, but Mosley, Rodriguez and others say that stopping by once or twice is not enough to fully understand the phenomenon at the pub. They say it’s not the best moments that stick in their minds — it’s the continuity of always having a place to feel welcomed.

Related links:
UCAB Statement on the Decision to Open a Request for Proposals to Lease the Pub Space at The Student Center