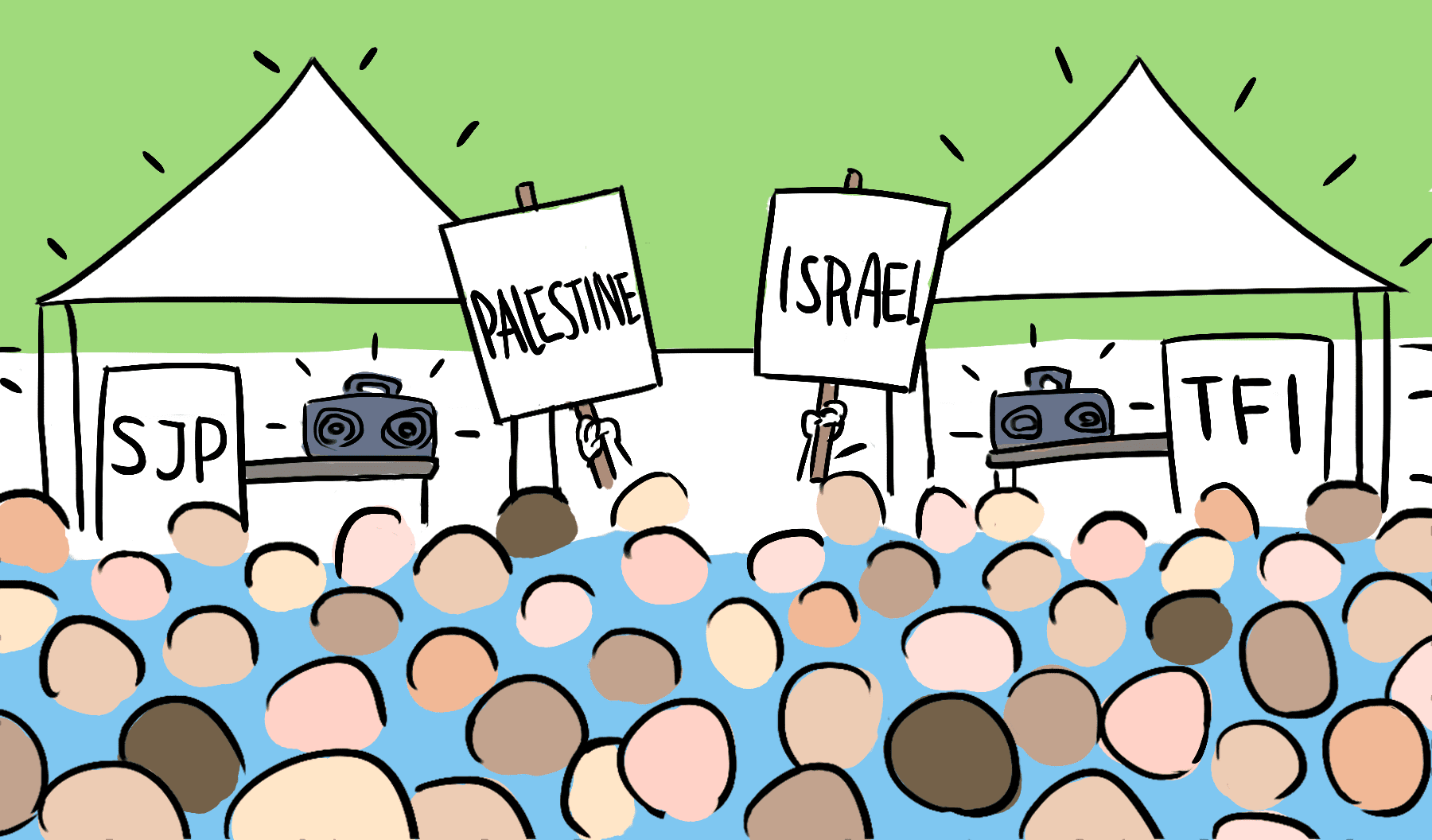 Following weeks of debate between Students for Justice in Palestine and Tritons for Israel, A.S. Council was hosting an evening of student input before voting on a resolution that asked the University of California to pull its considerable investments from companies that, SJP argued, profit from the “illegal siege, blockade and occupation of Palestine.”

In the brief time they each had to speak, students from both sides shared emotionally charged, personal stories that often held parallel themes of war, persecution and on-campus isolation. The audience, composed primarily of members of each community — and thus segmented — was far from shy in expressing alternating support or vitriol for the speaker.

Yet despite these exhaustive eight hours of student input and debate, Council didn’t make it to the vote that night. The decision came instead a week later on March 13, 2013, following a closed executive session: UCSD would vote to divest.

Divestment is based on the same principle as economic sanctions but can be done by non-governmental entities, like companies which often create jobs and stimulate the economy in foreign countries. The idea is that by pulling their business from certain countries, companies can create enough economic hardship for a state to change unjust policies and practices.

UCSD was not the first campus to approve the divestment resolution, nor would it be the last — UCLA passed its own resolution in November of last year, which made it the fifth UC campus out of 10 to do so and signaled the turning tides that would prompt the University of California Student Association to vote on two divestment resolutions last month.

The first resolution had been introduced by SJP in November and was tabled for months. Entitled “Resolution Calling for UC Regents to Divest from Corporations Violating Palestinian Human Rights,” it called for divestment from certain companies — namely Caterpillar, Boeing and others that do business in Israel.

The second, further-reaching resolution asked the UC system to divest funds from governments that have violated fundamental rights to life and liberty, including Brazil, Egypt, Indonesia, Russia, Turkey, Sri Lanka, Mexico and even the United States.

UCSA, which is comprised of representatives from 15 out of 19 student governments across the UC system, passed both resolutions.

Supporters of divestment say that, in the past, divestment campaigns have succeeded in pressuring foreign governments to change their policies.

President of SJP at UCSD Amira Abudia told the UCSD Guardian that divestment has had far-reaching effects in the past.

“Divestment is the same tactic that was used for the South African apartheid,” Abudiab said.

In the 1980s, the anti-apartheid movement pressed American companies to stop doing business in South Africa until the statewide segregation of races was ended and conditions for black and Asian citizens improved. The movement was largely supported by the efforts of students at Stanford University, Michigan State University and the UC system, the latter of whom pressured the administration to withdraw nearly $3 billion worth of investments from the country in protest of apartheid.

It was a move praised by anti-apartheid organizers throughout the state who saw Nelson Mandela’s visit to California, one of the largest economies to disinvest from the country, as validation of their efforts, according to a July 1, 1990 Los Angeles Times article.

One of the key differences in the divestiture campaigns of the 1980s and those on UC campuses today is the U.S. federal government’s stance on the issue. In addition to other economic sanctions on the country, the Comprehensive Anti-Apartheid Act of 1986 banned new American investment in South Africa and reduced imports from the country by 35 percent. However, a 2010 UC Board of Regents statement cites following the lead of the federal government as part of its reasoning to reject divestment.

“We fully support the [UC] Board of Regents in its policy to divest from a foreign government or companies doing business with a foreign government only when the United States government declares that a foreign regime is committing acts of genocide,” the statement reads. “The U.S. has not made any declaration regarding the state of Israel, and, therefore, we will not bring a recommendation before the [UC] Board [of Regents] to divest from companies doing business with the State of Israel.”

David Makovsky, director of the Washington Institute for Near East Policy Project on the Middle East Peace Process, told the Guardian that divestment is largely a symbolic move.

“The [UC system] actually doesn’t divest itself — it does all the damage without any of the positive,” Makovsky said. “I see this issue as ripping students apart. It’s making some students feel that they are not welcome on campus — that [their] campus is a hostile place.”

After the divestment resolution was passed at UCSD in 2013, Chancellor Khosla released a statement reiterating the UC Regents’ decision from May 2010 that “such divestment is not the policy of the University of California [system] and that a divestment resolution will not be brought before the Regents,” effectively negating A.S. Council’s weeks of debate.

A similar statement has not been made following UCSA’s vote. But in a Feb. 20 meeting with the UC Regents Investment Committee, SJP-UCLA and other groups involved in the investment of UC system funds, called for the Board of Regents to respect campus divestment votes.