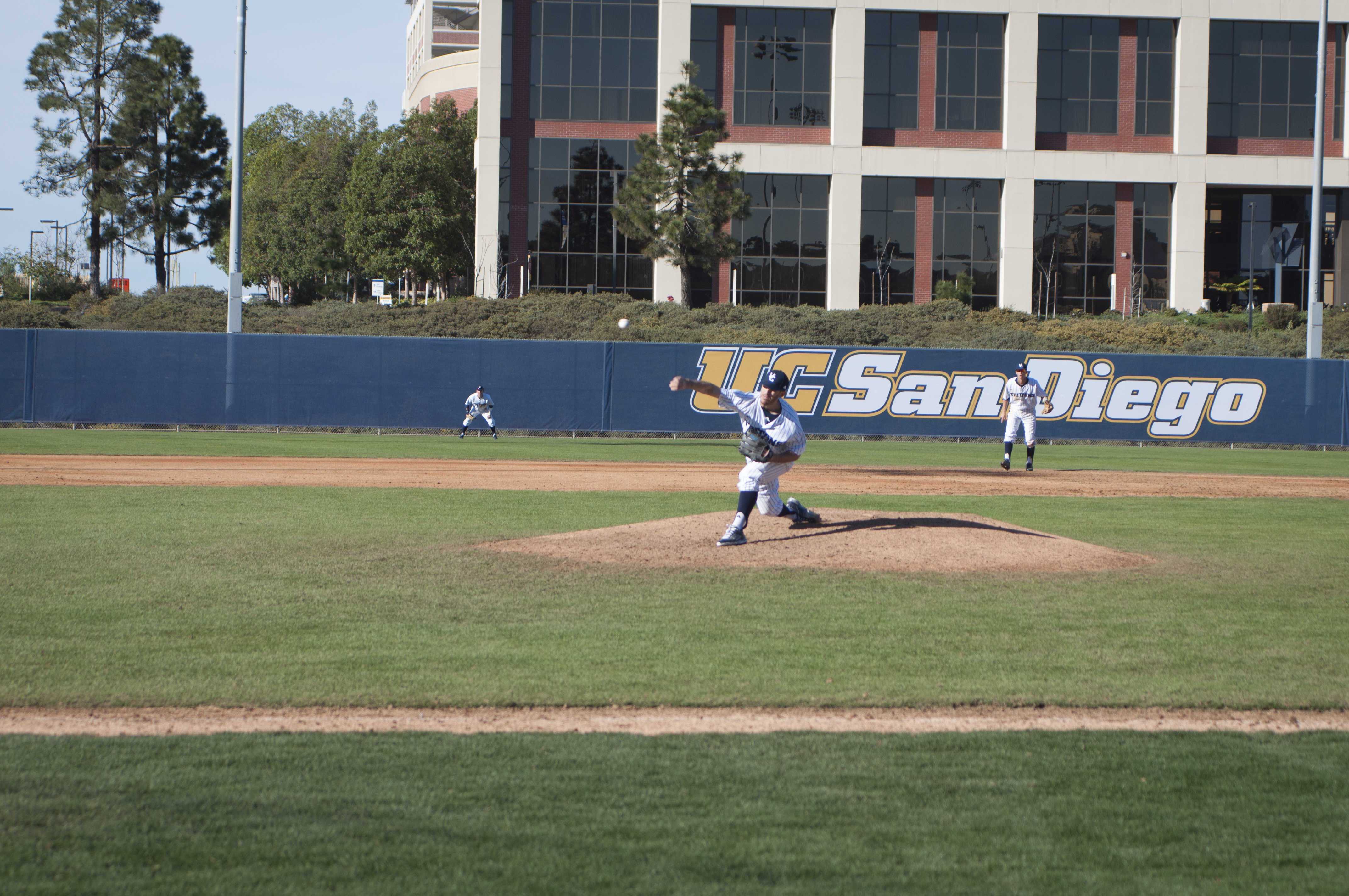 UCSD took the series 3-1 against Cal State East Bay, their only loss coming to East Bay’s offensive explosion in the third game of the series.

No. 17 UCSD baseball traveled north to Hayward to take on Cal State East Bay last weekend to continue California Collegiate Athletic Association action. The Tritons won three of four to improve to 13–7 overall and 9–3 in the conference.

Junior right-hander Justin Donatella (3–1) tossed his first complete game in his collegiate career in game one, finishing the night with a pitch count of 98 and allowing only two runners to reach base in a phenomenal shutout outing. The career-high performance, which carried the Tritons to an easy 5–0 victory, brought Donatella’s ERA down to 0.36 overall and zero runs allowed in CCAA action. In addition to this season’s shutout stats for the pitcher, Donatella has not allowed a run in CCAA play in 21 consecutive innings, stretching back to last year.

“Donny just put us on his back and competed his tail off out there for us,”UCSD head coach Eric Newman told the UCSD Athletics Department. “His stuff was just OK early on, but as the game went on, he really settled in and started to pitch. He was commanding his fastball. He really just did it with his fastball command, and threw the breaking ball when he needed to. It was about his fastball today. He was really good.”

Donatella’s performance thus far in 2015, and specifically his hallmark complete game in Hayward, lead to his recognition both as the CCAA Baseball Pitcher of the Week and as the National Collegiate Baseball Writers Association West Region Pitcher of the Week for the last week of February. “Donny”also joined fellow Triton and freshman swimmer Stephanie Sin to be honored as the San Diego Hall of Champions Star of the Month for February.

Game two in Hayward saw both teams tied at two through the first two innings until the Tritons managed a four-run third initiated by a single from junior infielder Troy Cruz. Sophomore outfielder Jack Larsen went 3-for-5 with a home run, two doubles and two RBIs, while crossing the plate himself three times in what became a 9–3 UCSD win.

UCSD’s luck would run out in the first game of Sunday’s doubleheader against the Pioneers, however, as the home team bested the Tritons 21–10 in an offensive blowout. Cal State East Bay scored 21 runs on only 11 hits and 38 plate appearances. Senior left-hander Trevor Scott (3–2) was credited with the loss as 10 Pioneers crossed the plate during his 2.1 frames on the mound, with none of those runs earned. The UCSD bullpen had a rough outing altogether, and could not keep up with East Bay’s offensive firepower.

Despite the tough loss earlier in the day, the Tritons bounced back in the seven-frame night cap Sunday evening to claim a 10–2 win to clinch the series.

“We dug ourselves a rather large hole [in game one] just by not playing catch, but the response from the players across the board was very good, which allowed us to continue to play hard through the first game despite difficult circumstances,” Newman said. “That carried into the second game, as we kept the quality of our at-bats and play at a high level. You never want to lose a game the way we lost the first one. Responding to it the right way was just as important.”

Cruz (2–2) threw from the hill for his second winning decision of the year out of four starts. He is credited with five knock-outs in the game in six frames while allowing only six hits.

Next up, UCSD will meet West Region Champions Chico State University at home for a four-game series starting Friday, March 6 at 6 p.m. at Triton Ballpark. The annual contest, as always, could have significant post-season consequences in terms of seed and home field advantage. Donatella is scheduled to open on Friday against Wildcat ace and All-American junior Luke Barker in what is sure to be one of the best pitching contests in Triton Ballpark during the 2015 campaign.