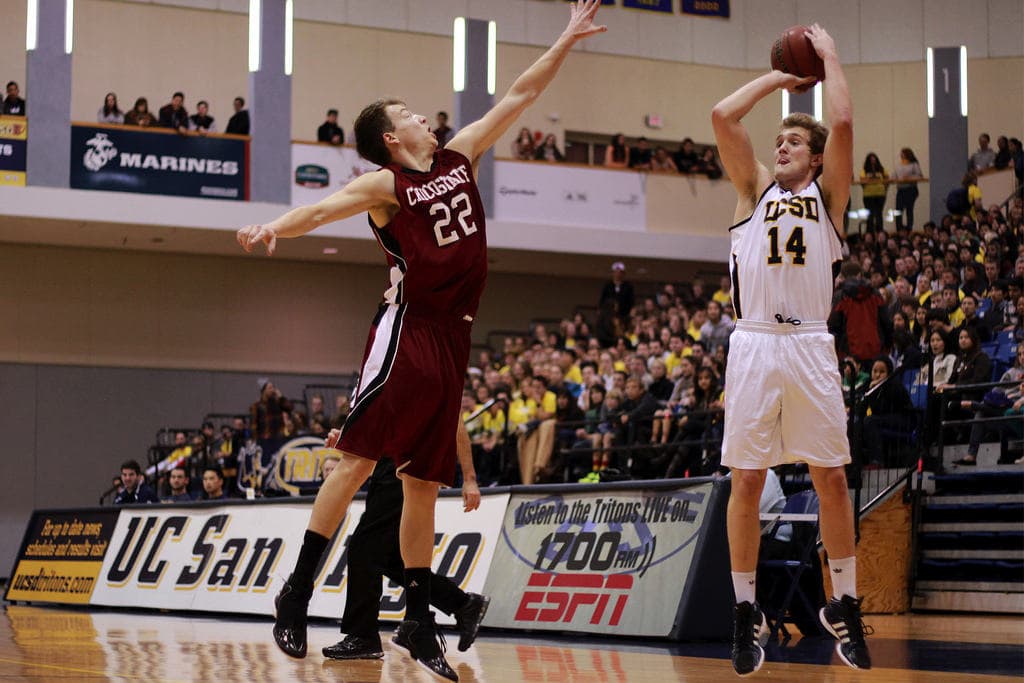 Facing a pair of the  conference’s top teams on the road this past weekend, the UCSD men’s basketball team suffered a 72–64 loss to Chico State (13–3) and a heart-wrenching 67–66 double-overtime loss to Cal State Stanislaus (11–5).

The Chico State Wildcats got payback on Friday night, avenging their 16-point loss against the Tritons earlier this season — its worst conference defeat in two seasons.

Chico State took control of the game right from tip-off. Hot shooting from Chico State put the Tritons at an early 15-point disadvantage. The Wildcats’ defense denied any offensive momentum for the Tritons in the first period, holding them to only 40-percent shooting and 1–5 from behind the arc. The Tritons’ 16 total attempts from three-point territory was the second-lowest all season. The Wildcats had a 13-point lead going into the half.

“They came out with a lot of energy and were the more aggressive team in the first half,” UCSD head coach Eric Olen told the UCSD Athletics Department.

The second half was much of the same story up until the halfway mark. Down by 15 points, the Tritons went on a 21–5 run to quickly erase the deficit and take a one-point lead. Junior guard Hunter Walker scored a team-high 15 points in the contest, 11 of which came during the spree.

With four minutes remaining and a two-point UCSD lead, the Wildcats went on a run of their own, outscoring UCSD 14–4 to squash the comeback attempt and close out the game.

“We bounced back and continued to fight in the second half,” Olen said. “I thought we showed a lot of resiliency and toughness to give ourselves a chance to win, but we ultimately didn’t make enough plays down the stretch to pull it out.”

The Tritons were dominated on the glass and were outrebounded 31–18.

After some inconsistency to begin the season, sophomore guard Adam Klie finally seemed to have found his rhythm offensively. Despite the loss, he finished the night with 14 points and six rebounds. In the last five games, Klie has been averaging 15.4 points per game.

UCSD faced another tough team the following night in Cal State Stanislaus in a double-overtime thriller.

With the game tied at 54 and 10 seconds remaining in the first overtime, Cal State Stanislaus hit a three to take a three-point lead. However, freshman guard George Buaku (11 points on the night) answered right back, sinking a stunning 22-footer at the buzzer to force the game into another overtime.

Down one with less than 15 seconds remaining in the second frame of extra play, Cal State Stanislaus’ senior forward Chris Read hit a clutch pull-up jumper over Klie to give Cal State Stanislaus the one-point lead. With no time-outs for either team and only five seconds remaining in the game, Walker was forced to take it down the length of the court, only to have his layup blocked at the buzzer.

Again, the Tritons fell to an early nine-point hole but were able to cut the margin to one going into the break. Both teams struggled shooting the ball in the first half, with UCSD shooting 32 percent from the field and Cal State Stanislaus similarly hitting 30.8 percent. The two squads were cold from deep, as well, combining for 4–19 from three.

In the second half, the Tritons and Warriors were back-and-forth. Down 50–49 in the final moments, Cal State Stanislaus could convert only one of three free throw opportunities, sending the game into the frenzied moments of overtime.

“I’m really proud of our effort tonight,” Olen said. “We fought hard for 50 minutes and unfortunately came up just a little short.

Klie had a game-high 17 points and brought down six rebounds. He also attempted a season-high five three-pointers and converted on two of them.

The pair of weekend losses was only more painful as the Tritons are neck-and-neck with both squads in league standings. UCSD falls to 10–6 in conference, good for fourth place in the California Collegiate Athletic Association, dropping from the previous week’s second-place spot. Chico State, Cal Poly Pomona and Sacramento State are ahead.

With only six games remaining in the season, UCSD still looks to finish strong and solidify the postseason standing. The Tritons will be on the road again next week when they go for the season sweep against San Francisco State (6–10) and Sonoma State (8–8).