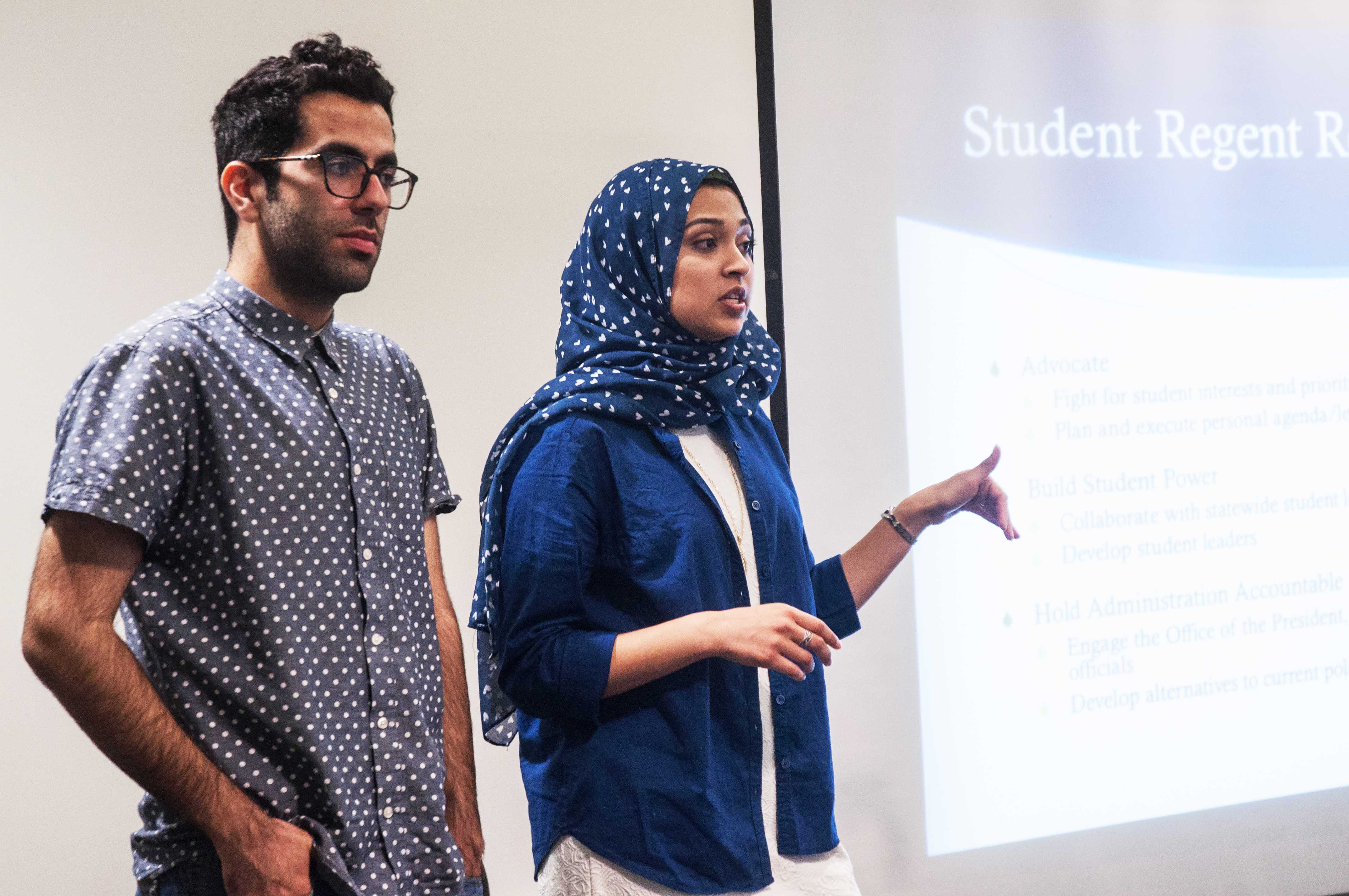 The UCSD Guardian had a chance to catch up with current student regent Sadia Saifuddin, a social welfare major from UC Berkeley, and Student Regent-Designate Abraham “Avi” Oved, an economics major from UCLA. The two youngest members of the UC Board of Regents discussed their thoughts on current events at the UC system and finding ways to get more involved through their positions.

Guardian: What do you think of the state becoming more involved in the affairs of the UC system?

Sadia Saifuddin: I think it is a political ploy to distract from the fact that the state has been disinvested from the University of California [system] over the past 20 years. I don’t think it’s very genuine, and I think it’s just coming from a place of “Let’s show that we care about the UC [system] by creating more issues from it” instead of thinking about how the state has been investing in the system historically and how [it] could be doing a better job.

G: How do you think Brown and Napolitano working together will impact students, particularly in terms of tuition for in-state and out-of-state students?

SS: It’s hard to say because it hasn’t happened yet. I think we’ll have a better idea by the next regents meeting about what process they’re going through, but they’ve been quite vague as to what their procedure is going to be, so we don’t know at this point.

G: What are your thoughts on the recent tuition protests?

SS: I say, “Go for it.” We need student power. We need student muscle to flex this time. There needs to be pressure both within and outside of the system, so students should make sure that they maintain that energy.

G: How do you plan on addressing students’ concerns about tuition?

Avi Oved: We have a couple of different plans ahead. Sadi and I requested information from the state government relations office about what [its] trajectory in terms of advocacy is going to look like, and the information that they forwarded us was very underwhelming. We were very disappointed. So Sadi and I are going to go in, clean it up and really re-shape the trajectory of their advocacy efforts that they’re going to have in the next five months, whether that’s the talking points or working with different satellite campuses to make sure that we’re not only doing district lobbying efforts but also statewide lobbying efforts, as well, and making sure that those efforts are going to be complementing the student efforts that have already been happening for months and months. That includes students, student groups and student group leaders from all 10 UC campuses. So we also want to shape that and make sure that it’s a cohesive student movement going forward.

G: What do you think of the regents’ decision to postpone the vote?

SS: I think it’s a bit performative. I don’t think it’s very genuine, and I don’t think it’s going to pass because it seems like an overwhelming number of regents on the board are in support of the tuition increase. So I’m not sure what rehashing that conversation is going to look like, whereas I think we should be focusing all of our efforts on the state.

AO: This is a sentiment that we’ve shared in our presentations in terms of why we are in the situation that we’re in, and I think that it’s really important to recognize that there’s a fundamental difference between the UC [system]’s vision for the UC [system] and the governor’s vision for the UC [system], and that’s why there’s this huge funding discrepancy that we’re seeing in the budget. With Gov. Brown’s [funding proposals] it’s obvious to all of us that he doesn’t want to maintain the quality of education nor expand it or make it an affordable education for that matter either. So it’s also making sure that people are starting to talk to each other rather than past each other.

G: What are your thoughts on UC Ventures? Can you tell us more on what’s going on with that and how outside investors will affect UC policies?

SS: OK, so to clarify, outside investors are not affecting the UC [system]. UC Ventures is a $250 million pool, and that pool is going to be going to any kind of UC-related venture project. So any kind of UC affiliate — it could be students or staff or faculty or researchers, any UC affiliate — can apply for that pool and that application will then be evaluated by an external committee that the UC [system] is hiring to look at how profitable some of those ventures are going to be, and then that will be funded. That pool of $250 million is coming out of the endowment of the university and out of our portfolio because it’s been identified that, even in the past year or two, there have been a number of very profitable companies that have been started by UC affiliates, and we missed that train in being able to make money off of them or encourage them and buy stocks off of those. So the investment committee’s job is to make money for the UC [system], so it’s not outside investors who are influencing UC policy. I think that may be a misunderstanding. It’s more about creating a venture capital pool for students, staff or faculty or whoever is working on that specific project to be able to get funding from if they qualify.

G: What are some ways for student organizations to work with each other across campuses to accomplish their goals?

SS: Network. Reach out to people on other campuses that are doing similar work as yourself. Get involved in systemwide communities like [the UC Students Association]. Take advantage of systemwide opportunities because then you will get more exposure to those organizations and be able to network and strategize to do something bigger.

G: In regard to your presentation, what do you want students to know about being a regent? What kinds of qualities or experiences make students good candidates for the job?

AO: I think that the biggest takeaway for the both of us is that there is no prescription to becoming a student regent. I know that when I was applying, I was told that I didn’t have the right experience — or enough of it — and that I wouldn’t have a good chance at becoming a student regent because I was an undergrad. At the end of the day, there is no prescription; there is no cookie-cutter trajectory to become a student regent. At the end of the day, you only need to have passion, a vision and the skills to enact that vision. If you have that, then you are more  than qualified to become a student regent, and that really is all you need. If you have that inkling, apply. It’s an incredibly rewarding experience, and I think Sadi can speak to that.

SS: It has been a very steep learning curve the first year but definitely one of the most exhilarating rides of my life. I would say that, along with everything that Avi just said, having sincerity and a deep understanding of where you come from and why you want to do this work [is important for becoming a student regent] because that will drive you on the most difficult of days, when you have to wake up early and go to sleep late and get up and catch a flight in the morning at 6 a.m. The position is hard, and if you’re looking for a line on the resume, there are easier ways. It’s a challenge, and the best kinds of candidates are the ones that care about the work they do. They renew their commitment, and they renew their intentions for doing this work every single day.