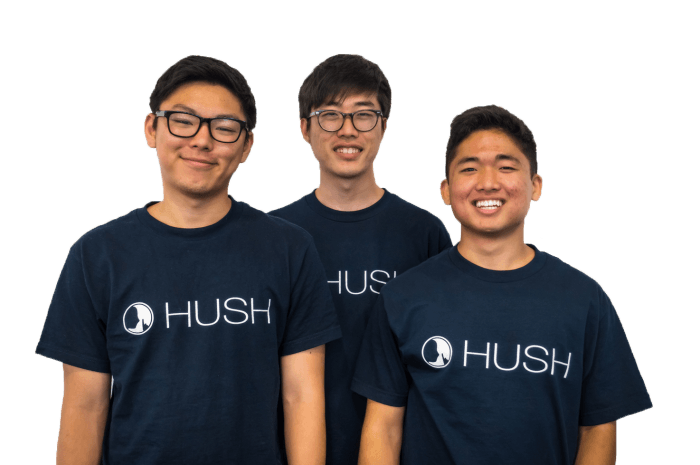 Ear plugs, while not obviously an important technology, are actually crucial to the college experience. Think of all those times you needed to study for a midterm while your roommates had friends over; suddenly, ear plugs don’t seem so worthless any more. Realizing the vast utility of ear plugs is what inspired two UCSD students and one alumnus to start up the company Hush.

Hush’s new “smart” ear plugs improve upon the traditional foam design to not only block out noise better, but also mask it with a tiny speaker that plays more soothing sounds chosen by the user. With a Kickstarter launch that rallied in more than $200,000 to date, over the original $100,000 goal, it goes to show that a good idea shouldn’t go to waste.

As far as ideas go, college presents a plateful of everyday experiences that could inspire a new invention. Daniel “Ewok” Lee — one of Hush’s three cofounders —says that, as a victim of loud neighbors his junior year, he decided to dedicate his project for MAE 154 (Product Design and Entrepreneurship) to the vision of sound-selective ear plugs. It was there that he first pitched his idea and was awarded $2,000 to continue his project after it was deemed one of three best pitches in the class.

“I had another team from the class [but] they didn’t want to [continue because] they had to focus on school, so I went out and drafted some of my talented friends that I knew … to try to pass on the idea,” Lee said.

Lee laughed while insisting that winding up with two other co-founders both also named Daniel — Daniel Synn and Daniel “Chesong” Lee — was pure “coincidence.” Synn was Ewok Lee’s roommate for two years, and Chesong Lee was a close friend from the computer science and engineering department.

“Daniel Synn, I knew him pretty well and I met in him freshman year … I initially reached out to him because I got along well with him and I knew he was smart,” Ewok Lee said. “And the other Daniel, I talked with him for a while and he was amazingly gifted at software development … He was difficult to convince … [but] convincing came in the form of … just constantly feeding him stuff [about the competitions won] and talking to him, trying to get him excited about the idea.”

As for expanding the company out, Lee says that Hush has relied significantly on friends for its workforce but also corresponds with an engineering firm they sought out and commissioned.

“I just posted on Facebook, ‘Hey, who wants to work at my company? We’re looking for a social media intern,’ and then a lot of people just messaged me,” Lee said. “That was my recruiting process.”

It sounds simple enough, but starting a company still strikes many as a daunting aspiration. Wishful entrepreneurs should take comfort in that help is available to them: Lee revealed that several pieces of Hush’s foundation were gathered from various resources on and around UCSD’s campus, all starting with MAE 154. It’s a class that any student with upper-division standing and a sense of innovation can take.

“MAE 154 teaches you the baseline language that you use in the entrepreneur world, just to know how to talk-the-talk, in a sense,” Lee said. “It’s helpful: They required us to work on a business pitch and things that are very standard in the start-up life.”

In this course, students are given $100 to build a prototype of a new product, and the top three able to pitch their idea most successfully are granted $2,000 to continue in their businesses’ development.

The other main backers of Hush are various programs from the Rady School of Management and the Moxie Center for Student Entrepreneurship, particularly the advisors from these programs whom Lee considers “very key” to the development of Hush. Attending UCSD events and gaining exposure to influential business individuals within San Diego eventually led to Hush’s acceptance into EvoNexus. This prestigious start-up incubator now provides Hush with additional advisors and a comfortable office space to run operations.

Networking events are hosted constantly throughout UCSD, which is where Hush met its first angel investor. Lee also encourages every entrepreneur to strive for growing comfortable with their business pitch.

“The biggest thing that I tell every single person is put yourself out there and pitch. Constantly pitch. Almost every good thing that has given momentum for us to keep pushing forward was a result of me participating in pitch competitions,” Lee said. “It’s kind of scary at first because you don’t want people bashing on your baby — in a sense — but you gotta [sic] do it because that’s what allows you to continue towards your goal and let it grow up in a sense. You can’t keep your baby sheltered.”

Keeping one’s audience in mind is also critical, according to Lee. The biggest challenge for engineers is learning to translate their technical achievements and product design into everyday language that the average person — a possible investor — can understand and appreciate.

“What you’ll find … is that no one [you’re talking to] cares about the technology,” Lee said. “They only care about ‘What difference does this make to me as a person?’ [or] ‘How does this help me?’”

A few months shy of a year into its business venture, Hush has already seen massive coverage by media from CNET to the Huffington Post, thanks to the explosive success of the Kickstarter project. Despite the bumps and obstacles they’ve been riding over, the three founders are grateful for the support they’ve received.

“UCSD has been absolutely critical to shaping where I am today,” Lee said. “Things have not been easy; by no means have things gone smoothly, [but] I feel like I’ve had good advice throughout.”