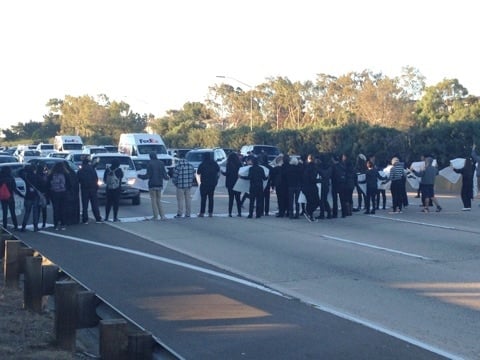 Dozens of UCSD students used their cars and bodies to block freeway traffic on the I-5 North near Nobel Drive at 7 AM on Nov. 26 to protest the decision of a grand jury in Ferguson to not indict Darren Wilson, a white police officer, for fatally shooting an unarmed black teenager, Michael Brown.

The protesters, many of whom were Black Student Union members at UCSD, stood on the freeway for approximately 40 minutes, creating miles of traffic. While some drivers expressed support for the protest, others shouted frustratingly at the students to move. Fox 5 San Diego reported that at least one frustrated motorist got into a brief, physical altercation with a student who led chants with his bullhorn.

When police finally arrived to escort the students off of the freeway, the protesters complied and marched off peacefully while continuing their chants. The police continued to closely monitor the protesters as they marched on surface streets, which attracted a blend of supportive fists and dissenting middle fingers from drivers passing by.

After circling a particular intersection multiple times and holding a moment of silence for Brown, the protesters revived their chants as they marched onto UCSD’s campus and down Library Walk. The protest concluded with the students gathering in a circle in front of Geisel Library to share speeches and stories related to the cause.

After the protest ended, the protesters made it clear to the media present that they would not participate in any interviews. However, BSU members did agree to speak with the UCSD Guardian after the fact.

BSU Chair Jazzalyn Livingston told the Guardian that one of their main goals was to create a space for students to express how they have been feeling after the grand jury’s decision.

“After they announced the verdict for the Michael Brown case, a lot of students felt very hopeless,” Livingston said. “This was our way, as students, to come together as a community and stand in solidarity to find an outlet to express that pain.”

Livingston elaborated that at a school where African Americans make up merely two percent of the population, black students feel especially vulnerable and defeated when they see cases like the one of Michael Brown.

Livingston also made clear that their protest was intended to be completely peaceful and that they did not want to put anyone’s life in harm’s way or disrupt anyone’s safety.

BSU Vice Chair Briana Thrift indicated that she was very pleased with the protest’s turnout, especially with Thanksgiving coming tomorrow, and is proud of the protesters’ courage to stand up to their naysayers.

“I’m glad to see that the community is not be afraid to do something that other people would call radical,” Thrift said. “A lot of people will downplay us and say that we didn’t need to go that far, but it’s not enough to do activist work on campus anymore. We need to reach out to larger communities.”