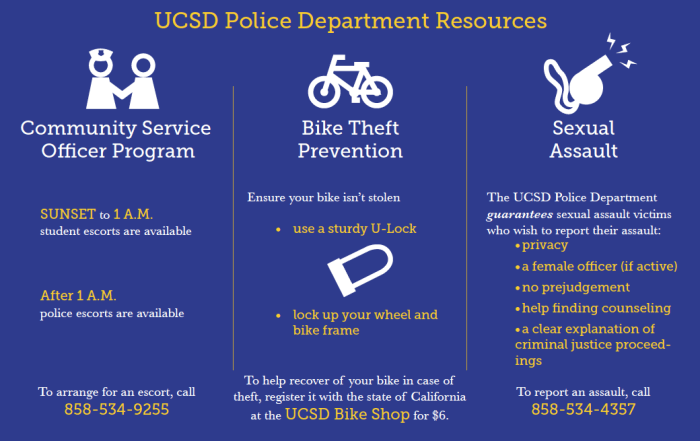 The new police chief David Rose discusses his experiences with law enforcement as a student at UCSD and his plans for improving campus safety.

“I started as a [Community Service Officer] here when I was a student,” Rose said. “I really enjoyed serving the community. Public service was my ideal. I started as a student dispatcher and then thought, ‘Well, I might as well be a police officer.’”

After graduating from the police academy, Rose ended up right back where he started, now as a full-time officer with the UCSD Police Department. After more than 30 years of slowly rising through the ranks, from CSO to full-fledged police officer with certificates for completing several programs at the FBI National Academy, Rose was promoted to his current position as the man in charge on campus, overseeing a department with over 60 full-time staff members.

With such a long tenure on campus, Rose has been a part of a wide variety of different events, ranging from the Sun God Festival to hosting the Dalai Lama. He specifically recalls Bill Clinton’s 1997 visit to campus as the commencement speaker.

“When Clinton spoke as sitting president, there was an incidence of not-so-nice fliers posted around campus and we were actually able to get that cleaned up,” Rose said. “It was a great feat of teamwork behind-the-scenes, from residential security officers who responded to the street sweepers who came out early, that really showcased what makes our department unique.”

When asked what else has changed in the last few decades, Rose brings up a viewpoint one wouldn’t normally expect from a professional peacekeeper.

“We used to do eight to 10 concerts a year here and I’d like to see that come back,” Rose said. “It’s more work for our cops, but I think it’s more opportunities for students to have fun.”

When Rose sat down with the UCSD Guardian, he was eager to remind people that the police are here to help the students and staff.

“I still remember what it’s like to be a student here,” Rose said. “We aren’t the ‘fun police’ trying to stop people from having a good time. We just want people to be safe.”

His current pet project is reviving the Community Service Officer program that had first enticed him to pursue a career in law enforcement. For now, that means trying to increase the number of students in the program, which currently boasts around 60 active-paid student members.

“The year before I started working there, it was called ‘Joe’s Escort Service’ and it was run by a group of frat guys who saw a need in the community to provide a service that no one was providing,” Rose said. “Also probably a good opportunity to meet girls. And so the university went, ‘I think it’s a good idea, but I think we should be the ones providing it’ and so they asked the police department to start the current system and it took off from there.”

In terms of other pressing campus safety issues, Rose identifies bike theft as a common but preventable problem. Rose’s biggest advice for protecting your property is to know your bike’s serial number. He says the department is able to recover a decent amount of stolen bikes but it’s very difficult to prove the bike is stolen without the serial number for evidence.

“Bike thefts are always on people’s minds and we got hit relatively hard this fall,” Rose said, when asked about which campus safety issues are currently taking precedence. “It’s important that if you see something, say something. I know we’re stealing that from New York, but it really is true. The students and staff provide a lot more eyes and ears than our cops possibly can, and if something doesn’t look right, it probably isn’t.”

He also shed light on the police department’s efforts toward preventing sexual assault.

“You always hear the statistic that 20 percent of college women will experience an incident involving sexual assault during their college career, and it’s true,” Rose said. “It’s actually probably an underreported statistic, but I think we’ll see a rise in reports as we’re able to get more and more information out there. Our department has always been very proactive regarding this issue and we’re working closely with a number of awareness groups, specifically Nancy Wahlig’s [Sexual Assault & Violence Prevention Resource Center], on campus to help move closer to eradicating this problem.”

With so much experience making sure the campus runs smoothly and safely, Rose seems content with his new position and longtime home and appears eager to be a big part of the police department’s future.

“You’re on the ocean,” Rose said. “You’ve got brilliant people surrounding you. It keeps you young. I’m grateful for the opportunity. It’s something I’ve aspired to I wouldn’t say all of my career, but as I became sergeant and then lieutenant, I saw it as a possibility. We have great cops and great personnel here, so my goal is to support them and get them the resources they need.”