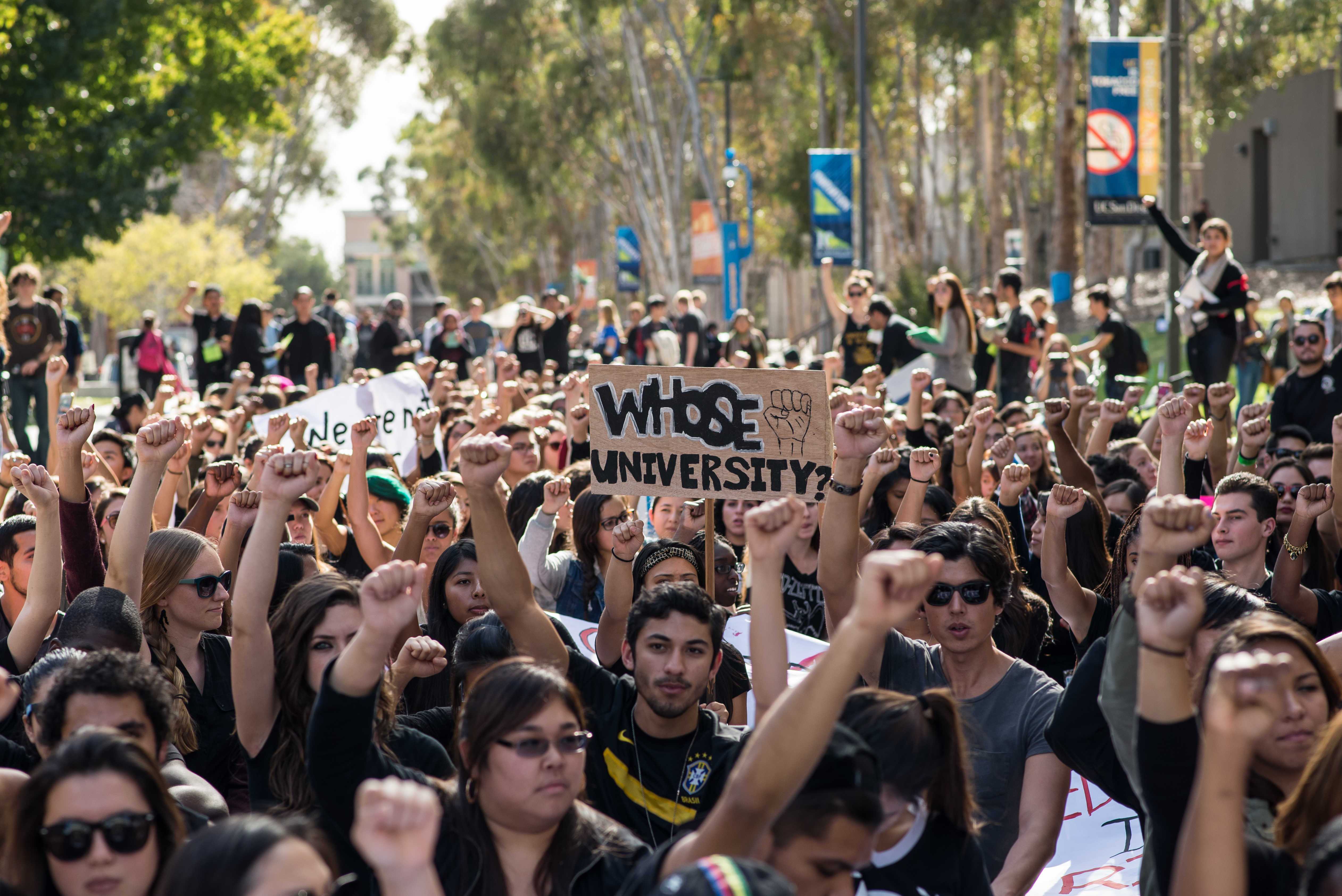 A student-organized protest was held on Library Walk on Tuesday, Nov. 18, to contest the proposed tuition hike that eventually passed in the Committee on Long Range Planning at the University of California Regents’ meeting held the next day, Nov. 19. The full-voting members of the Board of Regents will vote later to finally reject or approve the plan.

If the tuition increase plan passes, which was recommended by the UC Office of the President due to budget gaps in the UC system and a lack of funding from the state of California, it will institute an annual 5-percent increase that will occur over the next five years.

Approximately 300 students attended the protest and were encouraged to wear all black.

A.S. Vice President of External Affairs Allyson Osorio explained that the number of people in attendance will demonstrate to the Board of Regents that a larger group of students than anticipated care about the tuition increase.

“I think that many times, people think it’s only the activist students that come out, and I think UCSD just proved that it’s not that and a lot of people that are being affected by this,” Osorio said. “I know this will help us when it comes to getting Californians involved to know what’s going on because not many people know what’s going on and I think our numbers will be able to show that to the San Diego community.”

In regards the two newly appointed Regents Eloy Ortiz Oakley and John A. Perez, Osorio said that she worked with Perez in her first year of college and he was proactive with the University of California Student Association.

“[Perez] offered the middle class scholarship and this is affecting the middle class the most directly, starting next year, so I think it’s going to be a huge thing to have him on the board,” Osorio said. “I think he can provide a perspective of someone that [has] been in office and has [written] legislation that has helped students and has worked with students […] and from his track record, I do think his vote may help the students.”

The protest began with A.S. Vice President of Equity, Diversity and Inclusion Iris Delgado, who initiated the group chanting and encouraged students to sit down and participate. The chant included phrases such as “Hey, hey! Ho ho! Tuition hikes have got to go!” and “No cuts! No fees! Education should be free!”

Graduate students and professors spoke at the event about their views regarding the potential increase and how the lack of opportunities that future students would have with the passage of the plan. They also discussed how the increase reflects a gradual privatization of the public university system.

UCSD graduate student and literature Ph.D. candidate Niall Twohig explained that the protest is a common fight for access to a public education.

“Our fight […] is for all of the California people and for a critical education rather than a corporatized and militarized education,” Twohig said. “I think the energy is amazing and it’s inspiring that the students are not just fighting for themselves as individuals, but fighting for future generations who need access into this public university.”

Members from different student organizations including the Students of Affirmative Action Committee, Black Student Union and Movimiento Estudiantil Chicanola de Aztlan spoke on the matter and their disapproval on the proposed increase.

Other A.S. Council members, including President Robby Boparai, Osorio, VP Campus Affairs Amber Hawthorne and VP Finance and Resources Igor Geyn, read a statement to the crowd that was written on behalf of UCSD students. That same statement was also sent to the Office of Financial Aid and UCSD Chancellor Pradeep Khosla.

Boparai commented that the protest was the first time where members of Greek life, SAAC, athletes and  A.S. Council members were all present for a common cause.

“This is bigger than anything I’ve seen at my time at UCSD so far,” Boparai said. “We’ve built a community on our campus that we’re able to advocate together on anything that affects us, so if the University of California San Diego tries to pass something that infringes student rights, we know that we can mobilize students again like this.”

An “open mic” was later held where students were allowed to share their feelings on the matter.

Sixth College senior Francisco Javier Garcia explained how his expectations were exceeded by the amount of students in attendance, but how the proposed increase makes him fear for his little sister’s college education.

“Its a beautiful thing to see so many different communities come through [and] how different communities are already seeing these problems,” Francisco said. “Things are just getting to a point where you can’t ignore; we have to come together, we have to love each other, we have to show that solidarity, because if we don’t, then we lose everything. This is something that’s going to continue, I mean, I’m worried about […] people that I don’t even know that are trying to find an education that get discouraged because they see a paper that says ‘You can’t afford it’.”