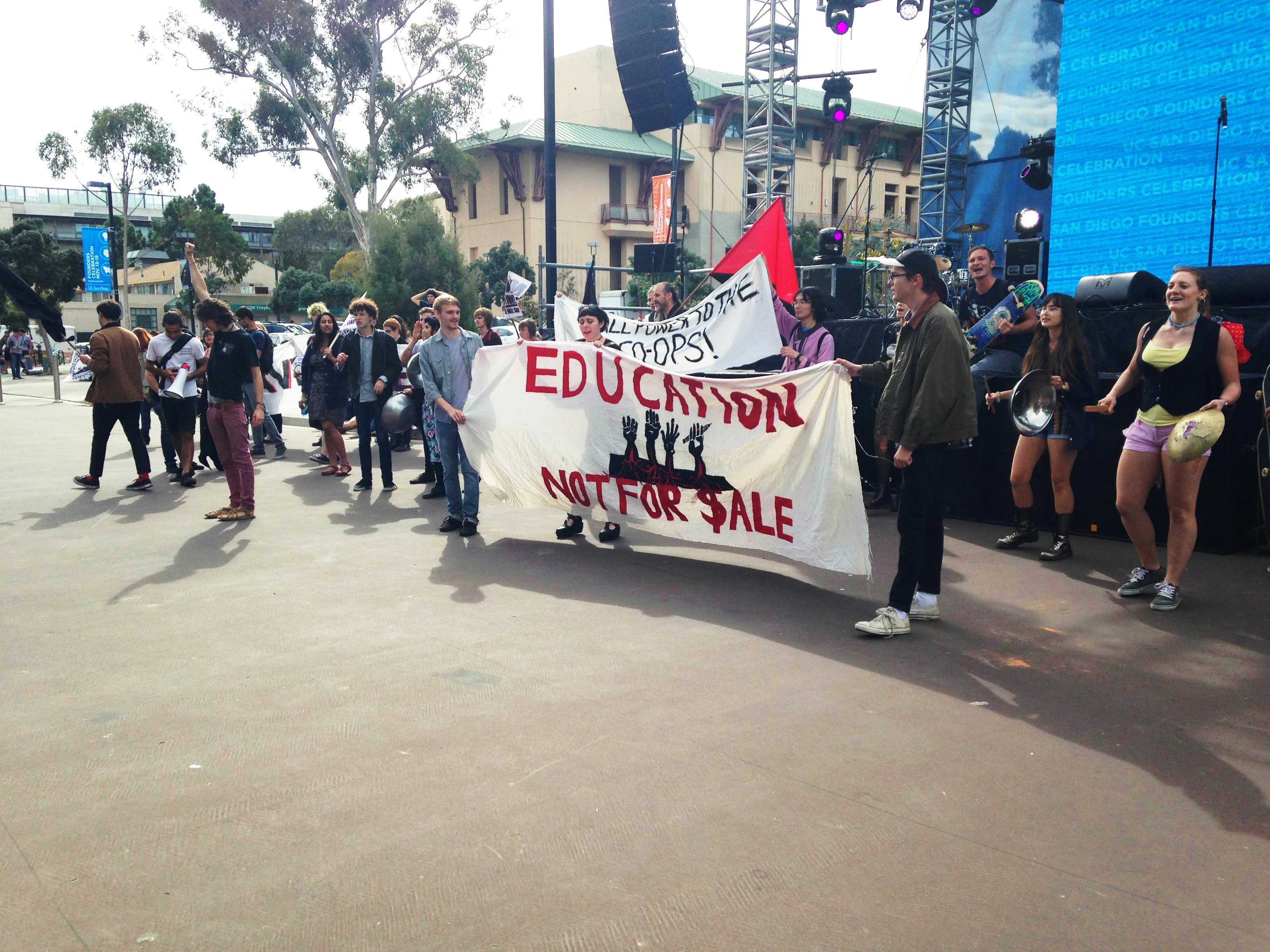 Che Cafe supporters marched across campus during the annual Founders’ Day celebration, chanting against the organization’s eviction from its historic location and protesting tuition hikes.

Members of the Che Cafe organized a march throughout campus on Friday, Nov. 14 to protest university plans to close the cooperative’s facility. The protest began at 11 a.m. with approximately 50 people in attendance and continued for approximately three hours.

The protesters met at the Che Cafe and proceeded through Library Walk, past the Hullabaloo stage in front of the Student Services Center, Price Center, the UCSD Bookstore and by PC Ballroom East. Outside of the event, members and supporters of the Che Cafe chanted phrases including, “Long live the Che!”, “Let us in!”, “Chancellor Khosla needs to go!”, “Tuition hikes have to go!” and “The Che united will never be divided!”

In addition, members of the collective stopped at each location and held speeches telling students that the eviction of the Che Cafe affects all of them. They discussed how the eviction reflects the gentrification of the UC system, which they believe is also illustrated in the UC Regents’ proposal to raise tuition by 5 percent each year for the next five years.

Che Cafe core member and UCSD alumni Rene Vera stated that he believes the protest will bring awareness to the campus about the collective.

“I definitely think [the protest] will make a difference,” Vera told the UCSD Guardian. “I mean, we definitely saw an upsurge in participation during our last rally in terms of students just paying attention, in general, to what’s going on, and we’re hoping that by getting people to just notice us to then begin participating in what’s going on and realizing that this affects them.”

In their last meeting, A.S. Council voted to amend the Che Cafe resolution it passed on Oct. 29. The initial resolution created a committee to investigate the Che Cafe collective and  facilities and calling upon the University to refrain from issuing an eviction notice until the committee completed its investigation.

A.S. President Robby Boparai proposed amendments to the resolution, calling upon the Che Cafe to refrain from meeting at the facility until the ASUCSD committee reached a conclusion, which passed by a vote of 17–11–3. During the meeting, Boparai said the reason he issued the amendments was to maintain A.S. neutrality on the issue.

In regards to the committee formed by A.S. Council, Student Sustainability Collective representative and Che Cafe ally Eden Berdugo told the Guardian that the Che Cafe does not have the time needed for the committee to reach a decision.

“I think the committee that was formed is really great. I hope something will come out of it. The downside is that it takes time. One hour a week, it’s going to take a couple of weeks to figure all this out,” Berdugo said. “They’re saying that the resolution is just in time for the committee to figure it out, but, you know, it might take weeks, it might take months and the Che doesn’t have that kind of time to wait for this committee of people who don’t even represent the Che to decide their fate.”

That same evening, Vice Chancellor – Student Affairs Juan Gonzalez issued a statement concerning the Che Cafe and the cooperatives. In the statement, Gonzalez said the University supports student organizations such as the Che Cafe.

“The university strongly supports the campus co-ops and the important experience they provide to our students,” Gonzalez said. “We are committed to ensuring the continuation of the student cooperatives, including the Che Cafe Collective. We want the co-ops to thrive and be successful.”

Gonzalez also stated that the Che Cafe space must be vacated, but the University has no plans to demolish the facility.

Furthermore, the statement said students may have to cover the repair costs of the Che Cafe.