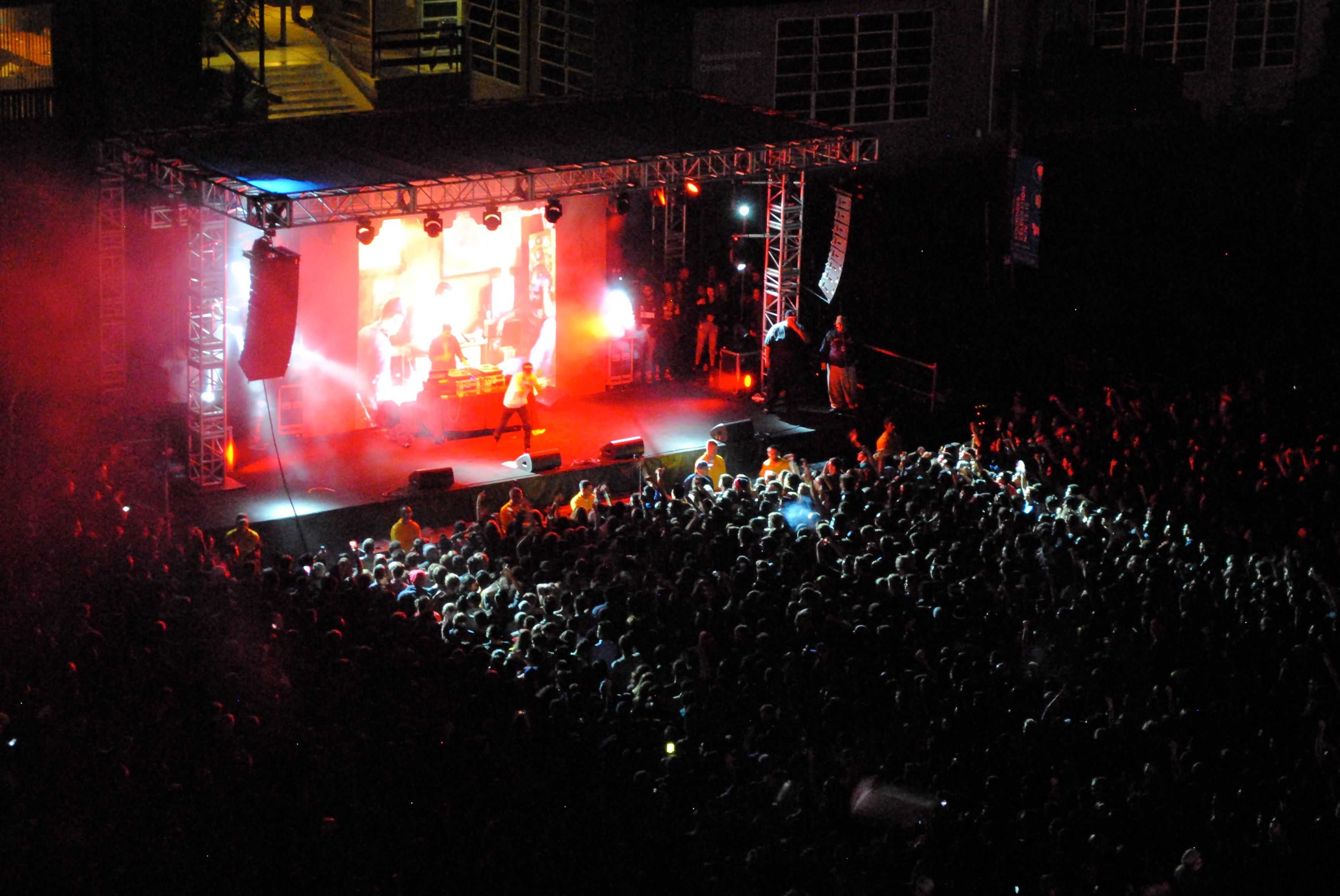 The fourth annual Hullabaloo festival took place on Friday, Nov. 14 in Town Square and Matthews Quad. The event, put on by Associated Students Concerts and Events, was geared toward undergraduate UCSD students and followed the Founders Day Celebration that had taken place in Price Center and Town Square earlier that day.

ASCE Festivals Director Sean Kennedy estimated that the turnout for the event was the largest in its history, with over 5,300 students who collected wristbands for the attractions and over 7,000 who attended.

“This was our biggest Hullabaloo yet,” Kennedy said. “It was really great seeing so many UCSD students come together and have such a great time. I also really want to thank all the volunteers and staff members who gave up so much of their time and put a lot of effort into this event.”

Hullabaloo festivities began at 8 p.m. and transformed the well-known space into a carnival-themed extravaganza complete with rides, food and concerts.

The concert component of the event was highlighted with performances by Logic, Erik Hassle, Conway and UCSD student disc jockey Avery. All of the artists appeared on a stage stationed in Town Center, across from the Student Services Center.

Headliner Logic, who appeared at UCSD only two days after performing on The Tonight Night Show Starring Jimmy Fallon, drew the largest crowd out of all the Hullabaloo artists. This was Logic’s first time performing songs mainly from his new album, “Under Pressure.”

Furthermore, the night featured all four rides previously advertised by ASCE, and the lines for a zip line, the Kamikaze, the Zipper and the Round Up stretched throughout Matthews Quad.

A variety of foods from vendors such as King Kream, California Kettle Korn, Cheesy Amigos and Famoso Tacos, winner of Triton Fest’s Taco Throwdown 2014, were available for purchase by Hullabaloo guests.

Student organization booths also accompanied the other festivities, and ASCE will be giving out cash prizes for the most creative booth design, best booth activity and a raffle that the booths could enter.

Hullabaloo is one of the many events put on by ASCE throughout the school year and is strongly supported by the UCSD administration.

“We want our students to have multiple opportunities throughout the school year where they can socialize in a fun and safe environment,” said Vice Chancellor-Student Affairs Juan Gonzalez in a statement that was released the day of the event. “Hullabaloo, a tradition in conjunction with UC San Diego’s Founders Celebration, and the inaugural Triton Fest are great examples of events where students can come together and celebrate what it means to be Tritons in a drug- and alcohol-free environment.”

Hullabaloo ended around 11 p.m., just after the completion of Logic’s performance.

One thought on “Annual Hullabaloo Festival Draws Over 5,000”