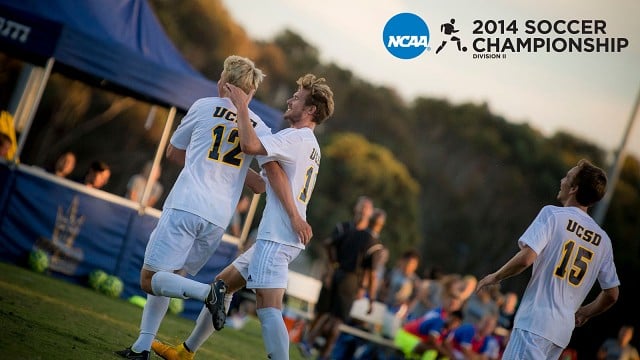 In spite of a disappointing and early exit from the California Collegiate Athletic Association Championships, the UCSD men’s soccer team has earned a ticket to the NCAA Championships. The qualifying squads were announced on Monday, Nov. 10.

Finishing with a 10–4–5 overall record and going 5–2–4 in conference play, UCSD appeared to have little hope of continuing its season after a first round ousting in the CCAA playoffs. However, the NCAA selection committee ultimately deemed the Tritons worthy of securing their second straight berth for the big dance.

“I wasn’t expecting it,” senior defender Matthew McClure told the UCSD Athletics Department. “I don’t think anybody was really expecting it. To hear the news that we got in was really surprising. It got everyone really excited. Everyone is really looking forward to this week.”

The Tritons enter the national tournament as the No. 6 seed within the West bracket and will travel to Cougar Soccer Complex in Azusa to take on third-seeded No. 14 Cal State Los Angeles in the first round. If UCSD prevails in the opening matchup, the team will move on to the second round to play home squad No. 20 Azusa Pacific University.

Facing off against Los Angeles will be familiar territory for the Tritons, as the Golden Eagles have been a dominant fixture within the same CCAA conference as UCSD. Cal State Los Angeles finished second on the year in league standings (9–2) while the Tritons finished just underneath in third. However, in its one matchup this season on Friday, Sept. 26, UCSD narrowly escaped with a 1–0 victory.

“We beat them earlier in the season,” McClure said. “We know how they play. We know the style they go about the game and it’s on a bigger, more playable field, which suits us.”

Eleven Tritons on this year’s squad were present during the NCAAs last season. Playing on the largest stage of collegiate competition, the Tritons will rely on a strong core of veterans to lead the way.

With defensive powerhouse Cal State Los Angeles leading all the nation’s Division-II teams in goals against (0.40), senior midfielder Brandon Bauman, who led the team in goals (five) and assists (nine) on the year, will surely be looked upon in clutch moments. Bauman was also recently selected for the elite, 11-player All-CCAA first team for his outstanding final season. Junior goalkeeper Cameron McElfresh, who recorded an impressive nine shutouts on the year, will man the cage on the other end.

The Tritons made a solid run in last year’s NCAAs, advancing to the third round before losing in penalty kicks. With a seemingly miraculous rebirth in their NCAAs qualification, there is no telling where the Tritons will finish this year. But first and foremost, UCSD will have to make it past that stout Golden Eagles defense.

“Being out and coming back in definitely re-energized everyone,” McClure said. “Having that second life is really getting everyone super excited and ready to go for the game.”