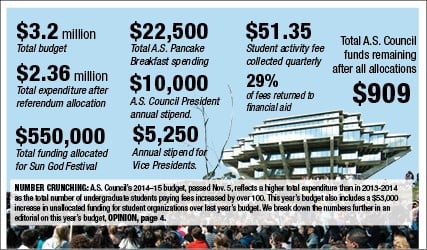 A.S. Council unanimously passed the 2014–15 budget of more than $3.18 million at the Wednesday, Nov. 5 council meeting after approximately five hours of debate and discussion of the proposed budget items.

Vice President Finance and Resources Igor Geyn told the UCSD Guardian that this year’s budget is different from past budgets because it is more reflective of what is actually being spent.

“This year, A.S. Council is making a conscious effort to be more transparent with and accountable for our budget allocations,” Geyn said. “For example, the allocations for the Office of External Affairs are reflective of the actual costs that the Office has been incurring for years, and many of the line items for the individual offices are more in line with actual expenditures for past years. Additionally, this budget is very conscious of student priorities in the allocations, and this is a product of a careful and methodical proposal review process.”

Some of the funds denied to A.S. offices included stipendiary positions requested by the directors of the offices. One of them was ASUCSD MOVES Director Kyle Heiskala’s request for a stipend to be given to the MOVES associate director. Another was Associate Vice President Student Advocacy Ryan Huyler’s petition for the creation of a stipendiary technical advocate position. The Office of Academic Affairs also took a cut from its A.S. Grants fund.

Geyn said he would handle potential disputes resulting from the passage of the budget by discussing concerns and explaining the logistics behind the individual budget items.

“Though we may have debates on the floor, I believe that everyone understands the realities of the financial situation A.S. Council currently finds itself in,” Geyn said. “That being said, my office and I have offered ourselves as a resource to secure additional sources of funding for the offices that feel their budgets have taken a critical hit. Additionally, I believe that encouraging collaboration and coordinated projects has the capacity to maximize the funds that A.S. Council is able to allocate.”

An increase in undergraduate enrollment this year provided an increase in student activity fees for the budget. However, according to Geyn, higher enrollment results in higher operational costs for A.S. functions.

“What ended up happening [this year] is that most of the offices ended up having to get a boost in funding because of that increased need in programming, operating expenses and things of that nature,” said Geyn.

One of the predominant parts of the budget debate was the issue of mandated reserves. Over the past few years, reserves have decreased. Geyn discussed that his goals this year include employing a conservative policy in terms of their use.

The Sun God Festival accounts for over half a million dollars of the A.S. budget. In regards to how that money will be used if the festival is cancelled, Geyn said he is working with A.S. Associated Vice President Concerts and Events Seraphin Raya to develop a contingency plan. However, at the moment, Geyn said A.S. Council is planning on Sun God Festival taking place and will determine how to allocate the funds after the Sun God task force meets on Nov. 21.

Another item included in the A.S. budget was the repayment of debt to the UCSD college councils. Geyn said this year’s budget would completely repay the money owed to them through a referendum included in the budget.