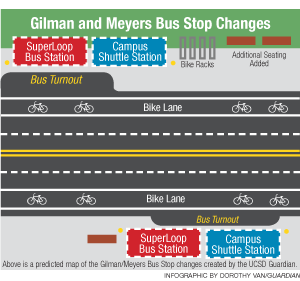 The San Diego Association of Governments and Metropolitan Transportation Services initiated and will fund the Gilman Transit Center, which will add four new bus stations on campus.

UCSD’s Strategic Campus Resource Initiatives announced on May 22 that the Gilman Transit Center, a proposed regional bus hub, will start construction this summer. When finished, it will be the largest transit center on campus and will include four new stations to improve commuting services for all UCSD students.

According to a UCSD Physical and Community Planning report, the center itself will have two new shelters each for Superloop and campus loop shuttles, located at the current Gilman Drive stops between Myers Drive and Russell Lane.

There will also be bus turnout areas to allow traffic flow while passengers are loading, larger waiting areas and several other open-space improvements. The San Diego Association of Governments and Metropolitan Transportation Services, who initiated the project with other stakeholders in accordance with the 2004 University Centers Neighborhood Planning Study, hope it will increase the convenience and efficiency of mass transit.

“With the addition of the turnouts, city buses and campus shuttles will be able to line up in the turnouts, outside of the regular travel lanes,” Director of University Marketing and Communications Laura Margoni said. “This will keep vehicle traffic moving and enable more efficient passenger pick-up and drop-off for buses and shuttles.

SANDAG is currently funding the entire project. Once complete, the Gilman Transit Center will continue to serve all current bus routes and several new ones, including MTS, Mira Mesa Rapid, SuperLoop and the North County Transit District.

“I personally advocated for the bike lanes to be included in this project and made sure that there was increased bike parking to be a part of the design,” MOVES Director Kyle Heiskala said. “I worked in conjunction with the UCSD Physical and Community Planning office to get MTS and SANDAG to agree to these aspects of the project.”

According to a campuswide email from Associate Vice Chancellor Brian Gregory, the transit center is the first of several planned transportation projects that will improve campus access and reduce greenhouse gas emissions. Other projects include a new bridge across Interstate 5 at Gilman Drive, Mid-Coast Corridor Transit extensions to UCSD and enhanced bicycle features on the Genesee Avenue Bridge.

The office of Campus Resource Planning Initiatives also plans to launch its On The Go website in June to provide timely updates on the projects, including estimated finish times and alternative bus stops during construction.