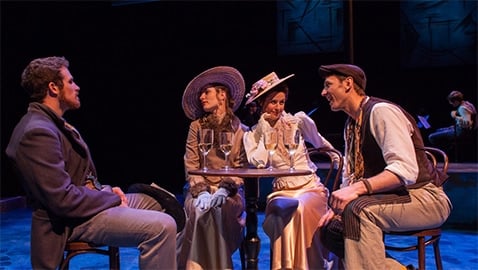 Playwrights of the Wagner Festival at UCSD share the inspirations behind their plays, performed from April 16 to 26 at the La Jolla Playhouse.

UCSD’s Wagner Festival is a platform for graduate students to put on plays they have written and a converging point for diverse sources of inspiration. This year’s festival will feature five new plays taking place from April 16 to April 26, written by five UCSD graduate student playwrights as part of the UCSD Master of Fine Arts Graduate Playwriting program.

The Wagner Festival is held every April in the Mandell Weiss Forum Theatre, the Arthur Wagner Theatre and in the Theodore and Adele Shank Theatre, and is part of the MFA’s three-year graduate playwriting program. Now a 12-year tradition, the Festival gains a new director and a new playwright each year. This year’s Festival will have the most playwrights, showcasing five plays to the public.

Plays to be featured will be “The Mango Farmer of Vermont” by Emily Feldman, “Deluge, or The Panda Play” by Kristin Idaszak, “in the crowding darkness” by Jeff Augustin, “Battlecruiser Aristotle” by David Jacobi and “Campo Maldito” by Bennett Fisher.

Augustin’s “in the crowding darkness” centers on an Afghanistan War veteran who returns home to the comfortable life that he and his partner led, only to uncover issues in their past and present that causes the couple to struggle.

“The struggles center on what we do when our personal dreams conflict with the dreams of our loved ones,” Augustin said, “along with these ideas of what a gay couple is and what marriage is supposed to look like.”

According to Augustin, his friend, who is a returned war veteran, inspired the play.

“A friend of mine came back and, overall, his life didn’t change course,” Augustin said. “He went back to college, got his degree, has a wife and kids. I became fascinated with the adjustment back to civilian life.”

The focus of Jacobi’s “Battlecruiser Aristotle” is on the situations characters face and the decisions they must make while inside a spaceship.

“This piece started as a spoof of the popular TV show called ‘Battlestar Galactica,’” Jacobi said. “The story focuses on a young girl on the ship who seems happy, but she can’t seem to pin down what’s bothering her. One day, an alien appears on the ship and makes some changes in [the girl’s] life that ends up starting a rebellion and almost killing everyone on the ship.”

Jacobi’s inspiration for the play was a mix of his childhood and “Battlestar Galactica.”

“I’m attracted to genre and using pop art,” Jacobi said. “I tend to stray from the classics and focus on the things I was raised on – comic books, TV, movies. This is an existential story on a girl who lacks agency, and I’m using sci-fi to tell it.”

Jacobi compared participating in the Wagner Festival to a residency as opposed to just a setup program because of its element of community.

“It was an award just coming here because of the small amount of people that they take,” Jacobi said.

Fisher’s “Campo Maldito” focuses on a tech-startup business in San Francisco disrupted by the haunting of ghosts.

Fisher was inspired by the growth of the San Francisco Bay Area and how it has changed over the years.

“The play is about this changing world in San Francisco,” Fisher said. “I am fascinated by the area with a lot of poverty and violence, yet [is] a really beautiful place with all these historic buildings and murals.”

Fisher believes being able to participating in the Wagner Festival is a wonderful opportunity because of the unique learning experience it provides its graduate students.

“It’s great just to be in a rehearsal room thriving off of the energy of other MFA directors, designers and actors,” Fisher said. “You learn more about your play in your rehearsal than when you’re writing.”