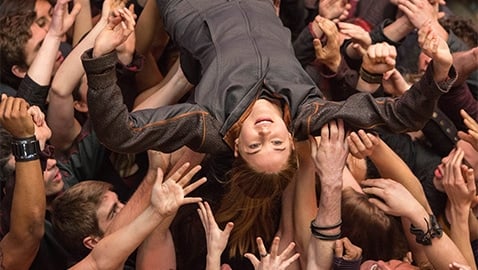 Despite boasting themes of noncomformity, “Divergent” is formulaic and predictable.

“Divergent” tells the story of Beatrice “Tris” Prior (Shailene Woodley), who lives in a post-apocalyptic Chicago divided into five factions based on their virtues. Each year, sixteen-year-olds take an aptitude test to see which virtue they express the most. When Tris is labeled Divergent — a “threat to the system” as the movie incessantly tells us — she transfers to a faction for the brave in an effort to hide her identity. There, she discovers what makes being Divergent so dangerous and why faction leader Jeanine Matthews (Kate Winslet) is insistent on eradicating them: They aren’t susceptible to brainwashing.

With so much background information, it’s difficult to imagine how director Neil Burger (“Limitless”) can seamlessly integrate it into the film without overdoing it. Unfortunately, he merely sandwiches the extensive details in an awkward, tacky voiceover done by Woodley at the start of the film.

As if we didn’t already understand that Divergents threaten the utopian society, the movie ceaselessly hammers the fact into our brain. Despite possessing so much potential as a villain, Winslet’s role as the manipulative Jeanine is reduced to a cheap plot device that relays the same message: Divergents are dangerous. For a character that is built up to be evil, Matthews seems to be quite harmless.

Furthermore, the film focuses too much on the romance between Tris and Four (Theo James); all other characters become underdeveloped. Even Miles Teller — who gave such a charismatic performance in “The Spectacular Now” as a similarly mischievous character — could not salvage his shallow role of Peter, Tris’ bully. Four is watered down to a stereotypical love interest, complete with a tough exterior and cheesy lines. Gone are his gentle masculinity and witty banter from Veronica Roth’s novel — even with the amount of effort James puts in.

On top of the superficial characters, the soundtrack — ranging from Ellie Goulding to Chance the Rapper — distracts the viewer from fully immersing themselves in the film’s universe. Pivotal scenes (such as when Tris first enters the Choosing Ceremony) are overshadowed by unfitting power ballads. Burger essentially hasn’t decided what kind of movie he wanted “Divergent” to be.

Either way, viewers will appreciate Woodley’s explosive performance as Tris. Woodley bestows Tris with a vulnerability that doesn’t undercut her heroism. From her internal struggle about abandoning her family to her fear of being murdered because she is Divergent, Woodley’s portrayal is nuanced and commanding. While her husky voice cracks and trembles at times you don’t expect, she doesn’t oversell it. Woodley has some of the most expressive eyes, compelling audiences to root for her despite the overabundance of cliches “Divergent” drags along. Regardless how one-dimensional the supporting cast is — namely Tris’ parents (Ashley Judd and Tony Goldwyn) — when Woodley interacts with them, she sparks them alive. Rather than feeling for a character because of the script and the respective actors, audiences empathize with them because of Woodley.

Ultimately, the thinly veiled metaphor of individuality is lost through the super-saturation of romantic tropes and the director’s inability to be more creative. Thankfully, Burger did succeed in one thing: setting up the world of “Divergent” for potential sequels.  Much like the fenced-in Chicago represented in the film, he has not left much room for the series to grow in artistry or originality, confining the franchise to hinge on appealing to the masses.