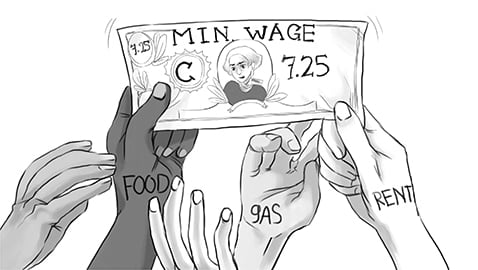 Minimum wage increases may compensate for inflation rates, but in order to effectively reduce poverty, government subsidies must also be implemented

Poor college students desperately seek employment and usually have to depend on a notoriously low $8-per-hour minimum wage that can’t even pay for a movie ticket. Fortunately, they can breathe a little easier now, as President Obama finally delivered his promise on raising the minimum wage earlier this month. Obama signed an executive order increasing the minimum wage for federal employees from $7.25 per hour to $10.10 per hour in adjustment for inflation by 2015; Democrats are also proposing an ambitious $12 wage by 2017. In the meantime, states are taking action on the same front. California plans to increase its state minimum wage from $8 per hour to $9 by July 1, 2014 and eventually up to $10 by 2016. Ultimately, this will help the millions of employed Americans who still struggle to pay their bills despite their hard work in minimum wage jobs.

The last federal minimum wage increase was in 2009 and was based on a reform bill passed in 2007; it has been seven years since Congress has touched the issue. Though a wage increase was long overdue at the time, excessive adjustment could have had a negative impact on economic growth. With the cost of living and inflation in the U.S. now on the rise, however, raising the minimum wage is crucial for people to be able to afford basic necessities.

While San Diego calls itself “America’s Finest City,” its cost of living is also one of the highest. The cost of living is 7 percent above the national average income with an average annual household expenditure of $52,012. It would take an hourly wage of $27 per hour for a family of four to make ends meet. The White House also admitted that even a minimum wage of $9 is far from meeting the present cost of living, since this only restores America’s inflation-adjusted value to where it was in 1981. The current minimum wage laws are insufficient to meet the basic needs of the people, and it is imperative to adjust wage according to inflation rates.

Raising the federal minimum wage is not only beneficial to college students’ and low-income families’ short-term finances, but will also help stimulate the economy on a broader scale. A 2011 Federal Reserve Bank of Chicago study showed that a $1-increase in minimum wage would stimulate consumer spending by $2,800 a year in households with minimum wage earners. In addition, the Economic Policy Institute estimated that a minimum wage hike would pump $21 billion into the economy. With more money in their pockets, low-income families would be more likely to make additional discretionary purchases alongside daily necessities like food, clothing and shelter. The capital used to increase minimum wage would eventually cycle back to businesses in the form of consumer spending and help boost the economy.

However, caution should be exercised. Dramatically adjusting or rapidly increasing the minimum wage might curb job growth and be impractical to enforce. The Congressional Budget Office projected that a wage of $10 per hour would reduce total employment by about 500,000 workers, as businesses seek to avoid the costs associated with higher-wage workers. Additionally, economist Milton Friedman called raising the minimum wage a form of discrimination against low-skilled workers. In a competitive market, any increase in labor cost would require budget cuts to compensate, and often, the first to lose jobs would be the least skilled. If the private sector cannot keep up with the increasing labor cost demanded by law, a minimum wage increase could become counterproductive to its original intent.

Essentially, the key to relieving poverty and increasing the standard of living lies with both the public and private sectors. Government-financed solutions, such as tax credits or wage subsidies, could succeed as complementary programs to take the full burden off businesses. In a 2011 study conducted by economists David Neumark and William Wascher, a higher minimum wage, along with federal Earned Income Tax Credit, would increase both employment and earnings for single women with children. However, Congress rejected such suggestions because it would put a strain on the federal budget. This decision is troubling, as federally mandating higher wages and placing the burden of financing on private business owners is somewhat hypocritical. Efforts from both sectors are needed to produce a comprehensive solution through a combination of sensible minimum wage increases and federal subsidization.

As the movement for a higher minimum wage grows in scale, the magnitude of wage raise must ultimately only be determined after careful scrutiny. A sensible minimum wage to compensate for inflation will benefit both Americans and the national economy, but overly increasing or rapidly adjusting minimum wage level could have negative repercussions on job growth. Both the public and private sectors must share the burden of relieving poverty and take accountability for their role in society.