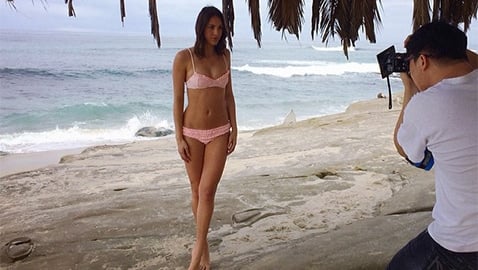 UCSD alumna Sophia Kim has created her own swimwear line, Siempre Golden, which donates a share of its proceeds to help conserve the world’s oceans and beaches

When UCSD alumna Sophia Kim traveled to Hawaii in 2009, she immediately fell in love with the Brazilian bikini bottoms that many sported on the island. The steep price tags of these pieces inspired Kim to start designing her own swimwear during her junior year at UCSD. After graduating with a Communication degree from Sixth College in 2013, she founded a bikini company last month called Siempre Golden.

“When I first picked [a bikini] up [in Hawaii] and looked at the price, I realized it was over $160,” Kim said. “I thought to myself, ‘Why is this little piece of cloth so expensive?’”

After her trip to Hawaii, all she could think about was creating a more affordable swimwear line that would appeal to a broader audience.

“I wanted to provide something that high school students and college girls and [girls in their mid-20s] could afford [yet] look stylish [in],” Kim said.

She has recently started selling items such as “Scrunchy Bottoms,” “Shaka Tops,” “Hang Loose Tops” and “The Teeny Bikini.” She hopes to give back to the environment through her sales. For each piece sold at prices that range from $35 to $45, Kim will donate to the Surfrider Foundation, a nonprofit grassroots organization that aims to protect the world’s oceans and beaches.

“I wanted to combine [my] passion for keeping the oceans clean with my love for bikinis,” Kim said. “Every time I make a sale, I know I’m one step closer to the main goal, which is being a successful company that will be able to keep going and give funds to Surfrider Foundation.”

Giving back to the environment ties in with the concept behind the line’s name.

“‘Siempre’ means ‘always’ in Spanish,” Kim said. “To always be golden is to think about others, the world and the environment.”

After getting a trademark for the brand name, Kim took some business management and marketing classes at UCSD to learn more about starting her own company. She also sought the advice of the owner of Surf Diva, a boutique in downtown La Jolla where she interned as an undergraduate.

The hardest part, Kim said, was finding someone to manufacture her designs, which have unique, braided features that complicate the production process.

“I tried to find sources in the states, and it was just impossible,” she said. “I knew I had to go somewhere else. This person would take me to the next source and the next source, and every person told me, ‘[I] can’t do this for you, it’s just too time-consuming.’”

It wasn’t until her recent trip to Bali, Indonesia that the young entrepreneur was able to find a manufacturer. Afterward, she spent five weeks making sure all the samples and designs were correct.

Now, Kim is working to publicize her swimwear line. She’s already had several photoshoots for her line, some of which feature current sorority girls from UCSD’s Delta Gamma and Pi Beta Phi. She also launched a Kickstarter this past Saturday in which her swimwear went on pre-sale online.

But regardless of how well her company does, Kim is determined to pursue her philanthropic goals of giving to Surfrider Foundation.

“Even if I don’t make that much money or I don’t have that great of an income in the beginning, that’s not going to prevent me from reaching my goal,” she said.