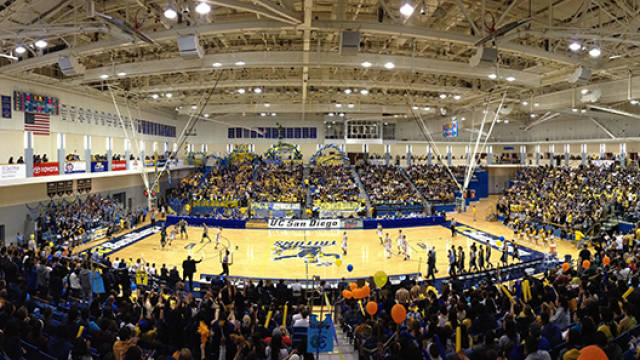 Changes to the annual spirit event include stricter rules for decorations, designed to prevent inter-college competition from becoming too intense and to alleviate stress on students in charge of organizing the night.

Administrators overseeing the Spirit Night 2014 plans made sweeping changes to the way UCSD’s residential colleges were judged for their participation, with particular emphasis on decorating standards.

After each annual Spirit Night, representatives from A.S. Council, the six residential colleges and the UCSD administration usually review the event proceedings and discuss possible areas of improvement for the next year. They then meet several times during fall quarter to coordinate and implement these changes.

This year, the college deans intervened in the process, deciding to cut down the Spirit Cup criteria and procedures, ostensibly to cut down student organizer workloads. Furthermore, they wished to promote year-round school spirit instead of focusing too much on a single event.

Matthew Sapien, A.S. Council’s AVP of Athletic Relations, has been attending the meetings for four years and plays a large role in organizing the preparations.

“We knew that there were going to be changes,” Sapien said. “In the past couple of years, administrators brought up that [decorating] is a stressful job on students, so last year, we had representatives from each of the colleges who felt strongly about it come to the meeting to try to eliminate some of the stress factors that were making it too tough of a job.”

According to Sapien, colleges used to be judged on six main criteria in past Spirit Nights. However, many of them were reformatted this year. Firstly, while college campus decorating was weighed as heavily as ever, students were no longer required to decorate the residence halls or dining halls. Decorations in the RIMAC arena were also severely reduced, primarily due to concerns over eco-friendliness. Colleges were instead allowed to display their own customized banner. Finally, attendance at Triton Jam, spirit rallies and sports games leading up to Spirit Night were no longer taken into account. Spirit Night attendance, college cheers and the halftime competition remained unchanged.

Although Sapien understands the rationale behind the administration’s decisions, he is unhappy with the sudden manner by which they were introduced and disagrees with the scale of the perceived stress problem.

“It was presented so quickly, we couldn’t have much of an input,” he said. “We didn’t realize how drastic the changes would be. We put so many resources into advertising select things that weren’t actually that highlighted anymore. It was frustrating on my end and pretty ironic that the deans wanted to minimize stress for us.”

Warren College sophomore Akshay Tangutur is the Commissioner of Warren Spirit and coordinated participation in Spirit Night in conjunction with other Warren organizations.

“For me, the workload was much different […] and it didn’t really alleviate much [stress], as I had to change all my thoughts and ideas to what had now been proposed,” Tangutur said in an online statement. “I believe that they can keep it the same next year, but the one thing that I would really like to change is the fact that we don’t get to decorate the gym […] Other than that, I guess I can live with the changes.”