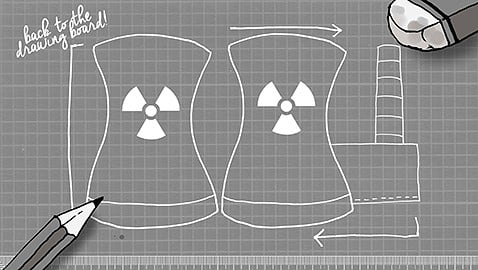 Nuclear energy is a practical replacement for fossil fuels, but only with sufficient maintenance and effective safety regulations for its power plants

Nuclear energy has been widely praised as the solution to ending America’s dependence to fossil fuels as it can provide large amounts of clean, consistent energy to large populations. However, the closing of southern California’s famous San Onofre Nuclear Generating Station has raised questions about the role nuclear energy should play in America’s future. Although concerns over safety is justified, the potential to effectively replace fossil fuels still makes an compelling enough argument for updating safety regulations. If exact security measures and better management are implemented, nuclear energy could very well become America’s energy savior.

Nuclear energy is the best replacement for fossil fuels because it can potentially last many years while providing enormous amounts of energy. The generation process also uses very small amounts of fuel with little environmental impact. According to the American Physical Society, nuclear plants such as San Onofre, which was opened in 1968, are typically retired after 60 years, but can be maintained for an additional 20 years. In addition, according to a 2013 report by Nuclear Energy Institute, “one uranium fuel pellet creates as much energy as one ton of coal or 17,000 cubic feet of natural gas.” With such a vast efficiency advantage over such a long timeframe, nuclear plants make eminent sense – however, they need periodic servicing to keep them running properly.

The early closing of the San Onofre plant is a disappointment, because its improper maintenance resulted in a waste of time, money and energy. According to NBC Los Angeles, $680 million was spent on upgrades in 2009 and 2010 – these were all for naught when the plant closed for good in 2013. Traditionally, the only reason for a power plant to shut down early is because of safety concerns based on either structural issues or permanent damage caused by natural disasters. That the San Onofre plant experienced neither of these issues and was still closed down indicates much deeper problems.

Most of San Onofre’s problems are rooted in poor upkeep and irresponsible decision-making. After San Onofre’s close had been finalized, California U.S. Senator Barbara Boxer released a report stating that the plant management was aware of the possible degradation of tubes carrying radioactive water during the installation process, yet had continued with its plans nonetheless. The decision to continue led to the premature decay of 3,000 tubes which were supposed to last decades, but only lasted a couple of years instead. Even though it had been built in 1967, the the San Onofre plant easily could have survived another 50 years with proper maintenance and upkeep. In addition, the 1.5 million residents who got their electricity from San Onofre power have to now turn to other (possibly unclean) sources of energy instead.

To prevent such misfortunes in the future, regulatory organizations such as the Nuclear Reactor Commission (NRC) should enforce their existing laws more strictly. According to a 2011 National Public Radio story, nuclear safety was taken for granted and sometimes even ignored for years. Although the 1986 Chernobyl nuclear reactor catastrophe gave the industry a wake-up call, safety issues largely fell out of the public eye until the 2012 Fukushima disaster in Japan. Having to wait until calamity strikes to realize the importance of safety is ridiculous and patently dangerous. Instead, safety checks should be done consistently and meticulously, regardless of whether or not the plant appears to be functioning well.

The unfortunate closure of the San Onofre plant shows the importance of constant nuclear inspections. Although the management should be given credit for shutting down the plant and thus avoiding what could have been another Chernobyl situation, it does not change the fact that nearly a billion dollars worth of investment and years of future clean energy was lost. If organizations such as NRC would take the initiative to strictly enforce the regulations they’ve created then nuclear energy will be able to fulfill the potential it promises. Nuclear power plants are great investments for our future energy demands, but need to be treated like long term expenditures. In order to be worth the initial cost, plants must survive for long amounts of time. With proper care and maintenance, using nuclear power as the solution for our energy crisis is entirely possible.

One thought on “Change of Plans”