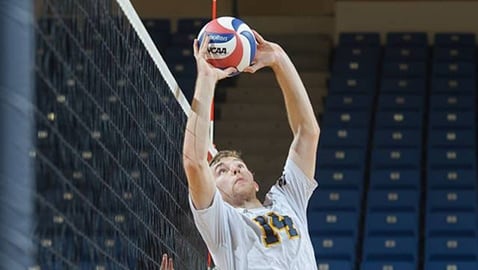 For its home opener at RIMAC Arena, the UCSD men’s volleyball team faced off against Brigham Young University in front of a loud crowd of 826 this past Saturday. Despite the support, the Tritons couldn’t deliver as they lost to conference powerhouse No. 7 BYU in straight sets — 25–12, 25–19 and 25–17.

Last year’s national runner-up, BYU, improved to 4–2 overall, while the Tritons have yet to find its first conference win (0–4). BYU and UCSD have faced off 35 times and BYU has claimed wins in all of these meetings.

BYU played effectively and hit an efficient 0.354 (40-11-82) with 15 aces, nine of which came courtesy of reigning MPSF Player of the Year Taylor Sander.

For the Tritons, senior opposite Johl Awerkamp had eight kills, while senior setter Mike Brunsting had 17 assists paired with nine digs. Freshman outside hitter Calvin Manchenko also had a notable appearance as he came in for the third set, making his first collegiate kill for UCSD.

UCSD held its only lead at 3–2 during the third set with the roar of the electrifying crowd behind them, but the Tritons couldn’t hold the lead and eventually dropped behind, unable to gap the deficit.

When asked, UCSD head coach Kevin Ring said there were a couple improvements the Tritons can make.

The Tritons will look to pick up their first win as they head off to Honolulu, Hawaii on Thursday, Jan. 23, to face off against University of Hawaii for a two-match set on Friday, Jan. 24, and Sunday, Jan. 26.