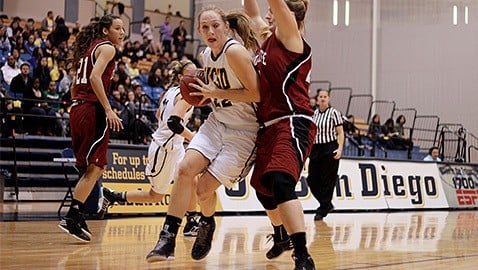 The UCSD women’s basketball team was busy over the last weekend of winter break, losing to Cal State Stanislaus 78–69 on Friday, Jan. 3, before upsetting No. 21 nationally ranked Chico State 76–65.

Against Cal State Stanislaus — currently tied for first place in the California Collegiate Athletic Association, with a 5–1 record — the Tritons suffered through an ugly loss, conceding 19 turnovers and shooting just 37 percent from the field.

“We had some chances in the first half to hit some shots that we normally hit, and we were playing at a tempo that was a little uncomfortable for us,” head coach Heidi VanDerveer said. “We just didn’t get it done.”

The game remained close in the first half, but in the second period, Stanislaus forwards Lauren Godde and Riley Holladay got hot. The two recorded 16 points each and combined for 20 points in the second half.

“We had more shots than they did, outrebounded them, took more free-throws,” VanDerveer said. “But we didn’t get stops when we needed to and turned the ball over too many times.”

Senior forward Erin Dautremont and junior guard Miranda Seto powered the offense against Chico State. Dautremont, a four-year starter and 2013 All-CCAA selection, earned a double-double, 18 points on top of 11 rebounds. While Seto, fully recovered from an injury sustained early in December, earned 19 points, going 9-of-10 from the free-throw line.

UCSD took an early lead that was quickly cut down due in large part to the efforts of Chico’s Courtney Hamilton, a shooting guard who has caused trouble for the Tritons in the past. With the Wildcats up by 11 points midway into the first half, Seto and Dautremont went to work. Combining for 14 points in the last five minutes of the match, the pair pushed to take a two-point lead by the end of the first period.

“I thought that the people on the floor decided that when we were down [11 points] that we were better than that, and they responded,” VanDerveer said to the UCSD Athletics Department after the game.

VanDerveer kept her starters on the court through the better part of the second half, with Dautremont and senior guard Megan Perry both playing 39 of the 40-minute contest.

“You don’t have possessions to waste in a game like this, and I think the people on the floor really gave us the best chance to win,” VanDerveer said.
The Tritons will wrap up their five-game homestand this week. On Friday, UCSD will face Cal State East Bay — tied for first in the CCAA — and will take on a winless Cal State Monterey Bay on Saturday.