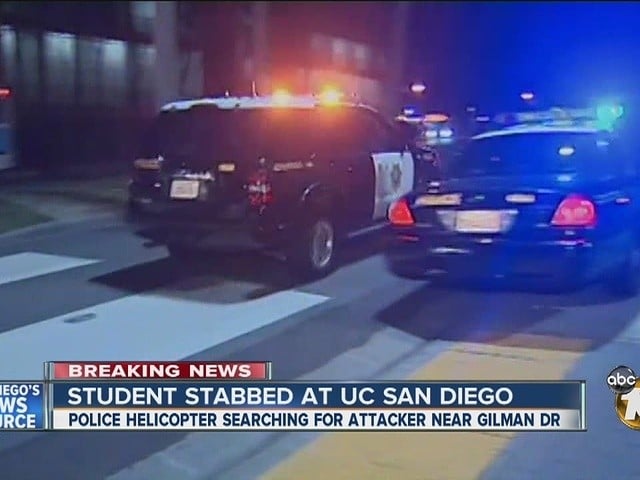 The UCSD Police Department is continuing its search for a suspect after a student was cut in the neck near Center Hall on Monday night.

Subscribers to UCSD Emergency Status alerts received a notification Monday night warning affiliates not to engage anyone involved. According to Police Department notifications, the student was cut in the neck at 7:16 p.m. on Monday at the intersection of Gilman Drive and Meyers Drive.

“UCSD police is looking for a stabbing suspect,” the alert read. “Do not contact the suspect, call 911.”

A police report sent to all students and staff said that the suspect “approached the victim from behind and possibly used a sharp object to cut the victim’s neck.”

The report described the stabbing suspect as a 50-year-old white male of medium build with long, dark hair and a bushy, white beard, wearing a “green sweater over gray and white camouflage shirt and pants” and carrying a tan backpack. He was described as a transient who left the area headed in an unknown direction.

The victim was taken to a local hospital. According to ABC 10 News, he sustained non-life-threatening injuries.
Shortly after the incident, students spoke to ABC 10 News regarding safety on campus.

“I take the bus here Monday through Friday, and I never think twice about my safety,” UCSD student Albert Trujillo said. “It’s just what is normal, and it’s on campus, and there’s a lot of people around, so it’s crazy that it happened.”

University Executive Director of Marketing, Media Relations and Public Affairs Jeff Gattas said that any information should be reported to UCSD police, who are continuing to investigate the incident.

“We believe it was a random attack,” Gattas said. “We’ve received lots of tips, and are continuing to look for tips.”
Information about this incident should be reported to the UCSD Police Department at 858-534-4357.