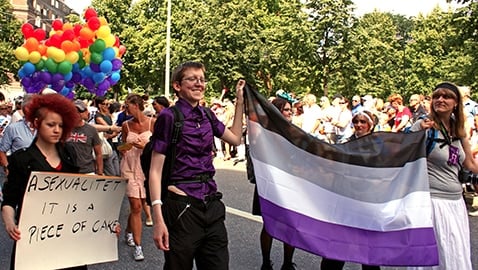 On the spectrum of sexuality between “straight” and “gay,” asexuality is one shade that often goes unrecognized — but one UCSD student has a plan to change that. Amy, who asked to remain anonymous, aims to bring more visibility and support to the asexual community, primarily through opening a chapter of the Asexual Visibility & Education Network, or AVEN, at UCSD.

“Asexual” refers to a person who does not experience sexual attraction, according to www.asexuality.org. The website differentiates asexuality from celibacy, saying that while celibacy is a choice, asexuality is an inherent characteristic of the individual, like any other sexuality. Sexuality also differs from romantic orientation, as one’s romantic orientation may allow him or her to desire a long-term, intimate relationship with someone without feeling sexual attraction to that person. Therefore, an asexual may still experience romantic feelings.

Since asexuality has historically been swept under the rug, Amy is currently working to bridge that gap in knowledge and support in order to acknowledge asexuality as a legitimate sexual orientation. Her first step is to open up an AVEN chapter at UCSD, which will function like any other student organization. This chapter will both help educate others about asexuality and provide a source of support for other asexuals on campus.

AVEN was founded in 2001 by American asexual activist David Jay and since then, has inspired a strengthened online asexual community. This has paved the way for asexuals to more openly discuss relevant problems and experiences in forums on websites, such as www.experienceproject.com and www.asexualityorg.proboards.com. Asexual student groups exist at various universities in the U.S. and England, including UC Berkeley, UC Davis, Princeton University, University of Colorado at Boulder and University College London. Amy plans to form a physical group similar to these for UCSD asexuals and supporters.

Amy describes her experience as an asexual in high school to be lonely and difficult, but since coming to college, she says her situation has improved.

“I have met and become close friends with other asexuals, which has reduced the loneliness significantly,” she said. “Finding someone else who is just like you in a sometimes hostile world is the best feeling in existence. Many people know what asexuality is on this campus, and I’ve found out the medical providers at UCSD do not discriminate against asexuals.”

Despite the improvement Amy has felt in college, she and others continue to face obstacles in gaining recognition. Amy mentioned one asexual friend who was told by her mentor that her sexual identity made her unfit to be a mother. Another friend was almost raped because her significant other “thought he could change her.” Yet another friend is afraid to tell his medical providers he is asexual, fearing that he will be subjected to unnecessary and damaging procedures, such as sex therapy.

Amy noted that many treat asexuality as a condition that needs to be treated or repaired.

“Many claim that ‘I have just not found the right man,’ ‘I just need to try it, and I’ll change,’ and that ‘I cannot love someone without wanting sex,’” Amy said. “I deal with obnoxious questions with a cheeky, witty response, because it is always better to be funny and witty than angry and upset. For example, whenever people say, ‘You can’t love someone without wanting sex,’ I sarcastically speculate about their activities with their pets.”

While Amy is comfortable with her asexual identity at school, a general lack of acceptance toward asexuality has made it difficult for her to come out to others, like her family.

“Today, I wanted to do an interview where my name was known,” Amy said. “But because my family gets the school newspaper, I could not — not without saying to my family what eventually needs to be said. I am 100 percent out at school, which is why I can start a club and speak on panels, but at home, it is a completely different story.”

Because of a risk that her family will not support her, Amy has chosen to remain anonymous — but that lack of support is what has motivated her to spread awareness.

“No one should ever have to hide who they are, for any reason,” Amy said. “Everyone deserves to grow up in a world that will not trivialize, belittle or threaten them for who they are, be that because of their race, gender, sexual orientation, gender identity or some other factor. I want to be an architect in creating that world for my friends, my family, myself and my children. I would have to be horribly naive to believe that starting a chapter would solve everything, but it’s a good place to start.”