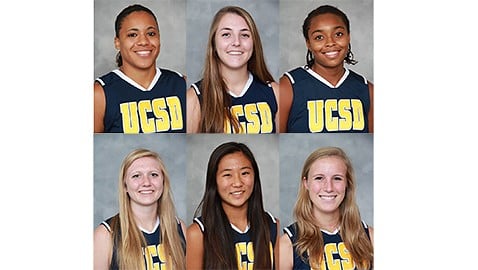 At the start of a new season for the UCSD women’s basketball team, fans can expect to see a strong rookie class, who will bring some youth and exuberance to the program.

Three games into the season, the Tritons have not seen much of Johnson, but MacLeod has seen some time on the court — appearing, most notably, for 15 minutes in last Friday’s loss to No. 21 Seattle Pacific and scoring seven points.

In addition, UCSD picked up four guards, including Tanita, White, Anderson and McKenzie “Georgie” Bolden— so-called for her Georgia roots.

Freshman guard White, from Indio High School, is a human biology major from Eleanor Roosevelt College, who said UCSD’s top-notch reputation made her decision to come and play here easy.

So far, White said, the best part of the school year has been the basketball program.

“Just being a part of the team and having those 17 other people there for me to hang out with and to go through the pain, struggle and accomplishments together has been great.”

Coming off a very successful senior season at Oak Ridge, the freshman guard recounts her Delta River League Championship, perfect 10–0 season and high-ranking playoff finish as a solid stepping stone into her collegiate career.
“Personally, I feel as though my high school program prepared me really well for going to the next level,” Anderson said. “There are a lot of philosophies of this team that I already shared coming in. As part of this freshman class, I know we not only want to be able to acclimate to the new college game but do all we can to contribute to a championship caliber team.”

She also agreed with teammate White that the team’s support has helped her adapt to the college game.

“I think that the support from teammates to help with the new things has helped me adjust to more obvious differences like speed of the game, both mentally and physically,” Anderson said.

This rookie class will look to follow the winning tradition set forth for them by a program which won the CCAA Tournament last season and which set the school record for the longest winning streak (26 games). Having lost the talents of guards Daisy Feder and Emily Osga, both first team all-CCAA members in 2012-2013, the team will need to find replacements for the pair’s scoring output. Both Feder and Osga were members of the 1000-point club by the time they graduated last year.

“For the team as a whole, I think we have a mindset to be a postseason team,” Anderson said, “Especially coming off the conference championship last year.”

The road to another championship will be a unique one with this bunch of new personalities.

“I feel like my class will bring a good amount of energy off the bench and all go hard every second we are on the court,” White said. “We will also bring a little bit of fun during practice and games and also a little bit of swag.”

We have already seen some of this with the excitement displayed by the women’s basketball team at Triton Power Hour, including in the performance by White aka Rapper Jacks, in the event’s rap competition — for which she won an iPad mini.

Fans can expect a long stretch of home games for the Tritons this January. The Tritons will be playing at Rimac three out of four weekends at the start of Winter Quarter 2014.

“I’m really excited to get the chance to witness a new community of fans and see other athletes and students that I have met so far at games,” Anderson said. “Playing in such a large gym, it should be awesome.”

The Tritons started the road to a championship season with a conference win against Cal State San Bernardino in their season opener, and are now 2–1 with the loss to Seattle Pacific last Friday and an overtime win against Western Washington the following day.

The Tritons’ next game is this Friday Nov. 29 at Rimac Arena against Metro State, at the UCSD Thanksgiving Classic tournament.