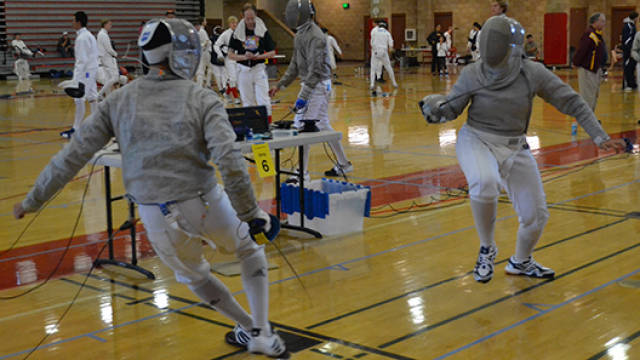 The UCSD men’s and women’s fencing teams hosted the 18th Annual Bladerunner Tournament this past Saturday and Sunday at RIMAC Arena. The tournament was part of the U.S. Fencing Regional Open Circuit and drew 295 unaffiliated fencers from all across the country.

“We’re just trying to work out the kinks and come together as a team,” junior foilist Keric Moore said to the UCSD Athletics Department last Saturday. “It’s not really important as far as collegiate competition goes, but it’s good to fence the other up-and-coming athletes from around the area and from out of state that come here.”
At the last event, the UC Irvine North/South Duals, the Tritons went undefeated against intercollegiate teams from California, but this time their record wasn’t as pristine.

On the men’s side, UCSD’s best results came from team captain senior Bryson Abilay finishing with silver for the men’s foil after defeating 49 other saberists. Junior Peter Meckling followed close behind as he finished with a bronze in the men’s foil. Freshman Sean Callaghan impressed as well by finishing at second from amongst a field of 75 epeeists. Sophomore Eduard Zilinskiy finished at eighth place for the foil, another notable performance.

The top Triton finisher for the women’s saber was sophomore Megan Gesner, who finished in sixth place. Sophomore Karinne Caissie finished in eighth place, accompanying Gesner on the top-eight stand.

“The men’s freshmen have been really impressive — they’ve been showing good numbers, and I think they’re going to do really well this year,” Moore said. “The women’s team has a lot of good returners that look really strong.”
Next up, the Tritons will participate in the West Invitational at Stanford University on Jan. 11, 2014.