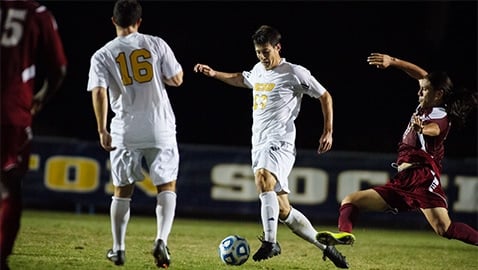 The UCSD men’s soccer team will take on Simon Fraser in the NCAA Round of Sixteen this Friday, Nov. 22 on the campus of Regis University

The UCSD men’s soccer team left for Denver, Colo., on Wednesday, where the second-seeded Tritons will meet with fourth-seed Simon Fraser in the NCAA Round of Sixteen on Friday, Nov. 24.

After a string of unremarkable seasons, UCSD makes its first NCAA tournament appearance since 2003. With the No. 2 seed, the Tritons had a first round bye last Thursday before narrowly defeating conference opponent Chico State in a penalty shootout, championed by UCSD goalkeeper and California Collegiate Athletic Association Defensive Player of the Year Josh Cohen, who saved three of seven penalty kick attempts.

“It was a big win; it was the fourth time we’ve faced Chico this season,” UCSD senior defender Gavin Lamming said last Wednesday in a segment of the online streamed talk show, “Triton Talk.” “Both teams match up well, and emotions were high, stakes were high. We knew that if we lost that’d be the end of the season. So we just tried to make the most of it and grind it out.”

But three rounds deep into the 35-team tournament, the Tritons have yet to face an out-of-state team this season. UCSD will have its chance this Friday in its match against British Columbia’s Simon Fraser — a team that went to the Final Four last season.

Dealt the fourth-seed, Simon Fraser battled its way through the bracket, with a first round 5–0 victory over Riverside-based Cal Baptist University last Thursday. The following Saturday, the Clan (17–2–1 overall) made waves, upsetting CCAA regular season and tournament champion, first-seeded Cal State Los Angeles 2–1 on the Golden Eagles’ home field.
With one of the most effective front lines in the nation — the Clan has the second highest goals per-game-average in the NCAA (3.45) — Simon Fraser will make for an interesting match up with the defense-minded Tritons. UCSD currently has the third lowest goals against average in the nation (0.5) — with a backline made up of All-American Cohen and senior defender Alec Arsht playing wide, along with All-CCAA Lamming.

“Simon Fraser is clearly a very talented team, whose strengths lie in their attack,” UCSD head coach Jon Pascale said. “Our defending has been strong all year and will be tested on Friday. Our team is focused, ready and excited for the opportunity.”

The trio will have its hands full with the likes of a multi-faceted Simon Fraser attack. The Clan boasts four players who have notched seven or more goals this season — most notably Colin Jacques. Just a sophomore, Jacques has recorded an impressive nine goals and nine assists this season. The Tritons will also need to keep an eye out for junior midfielder Jovan Blagojevich -— eight goals on four assists — as well as 6-foot-4-inch striker Carlo Basso — seven goals on five assists for the year.

Despite Simon Fraser’s obvious assets, Arsht is confident in his side.

“I love our chances against anyone at this point,” Arsht said. “Don’t know what to expect from Simon Fraser, but they will be a good team for sure.”

The game is slated for 12 p.m. EST on the campus of first-seed Regis University — a squad UCSD may face in the fourth round if the Tritons advance.