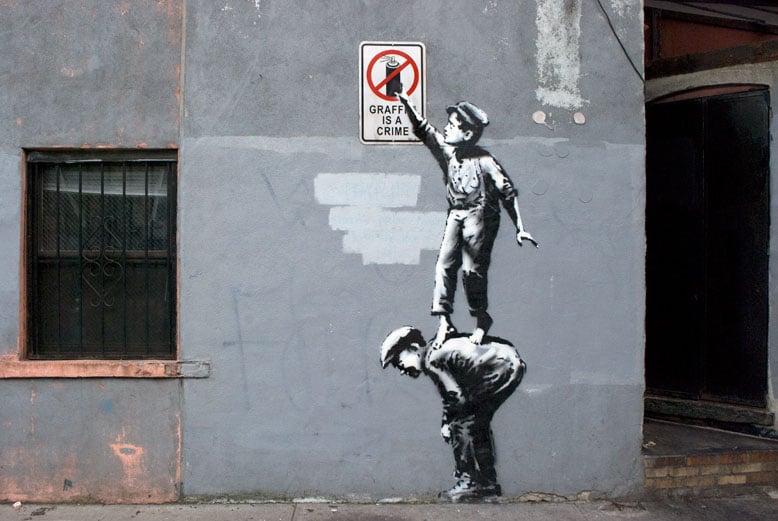 Banksy’s art looks cool, but his anti-establishment commentaries are shallow

For the month of October, noted street artist Banksy made New York City a sprawling art gallery, spreading his original pieces all across the five boroughs. Nightly installations created a daily rush to see (or be photographed seeing) whatever new artwork — generally graffiti stencils of people or animals on buildings or billboards — Bansky made the night before. Some pieces were defaced almost immediately, and some were encased in Plexiglass. “Better Out Than In,” as Banksy named his residency, gave New Yorkers — and the rest of the country — something to talk about. Hipsters and pseudo-revolutionaries praised the Occupy-ish, semi-subversive democratic bent (e.g., the words “This site contains blocked messages” painted on a wall as a not-so-subtle jab at Internet censorship) of both the work and the means of distribution. Stuffy art establishment types were unimpressed. In an interview with NPR, New York art critic Jerry Saltz derided the pieces: “Banksy is not an artist … He’s completely conventional … all so obvious. So obvious.” I can practically hear Salz sniffing with indignant disgust and looking down his nose at me for calling Banksy a “street artist” just now.

Despite his questionable status in the high-art crowd, Banksy is, probably because of the mix of striking visuals with a message the 99 Percent never tires of hearing, downright marketable — and very, very profitable. One of the pieces for “Better Out” was “The Banality of the Banality of Evil,” a painting Bansky bought from a charity thrift shop, altered and then donated back to the same thrift shop he bought it from. On the website biddingforgood.com, the painting auctioned for $615,000. During his residency, he also set up an anonymous stand selling his own work without the Banksy name attached. Hardly any of the works sold, and those that did went for tens of dollars, not hundreds of thousands.
Which begs the question: Is Banksy really just an act, a name, a cultural phenomenon? Does the fact that people don’t value his art if his name isn’t affixed to it make his art less, well, art? There is a case to be made that it does. If Bansky’s huge popularity is due more to the aura that surrounds his name than to the work he does, then the work itself is irrelevant and cannot define him. Instead, Banksy has reached that Mobius strip of meta-celebrities that are famous because they are famous because they are famous, ad infinitum/nauseam. If this is the case, Banksy is Kim Kardashian with a less luscious posterior.

So the argument goes, at least. What this fails to address, though, is that people can hardly identify the work of any visual artist without a name attached to it. Most people (author included) couldn’t identify a Monet without the painter’s name on display, much less distinguish him from Manet. Yet we still call Monet (and Manet) an “artist.” That’s not necessarily a problem. Without a drastic expansion of the humanistic education provided to students, it’s totally unreasonable to expect everyone to understand the finer points of Monet’s techniques and why his style is unique. This means, then, that we can’t question Bansky’s status as an artist simply because people didn’t storm the stand he set up during “Better Out” and buy all of his anonymous pieces.

Things that more people like (e.g., Banksy’s art) are (generally) less worthy of being called “art.” The fact is, the wider an audience for an artwork is, the more difficult it is for that artwork to really perform some of the more important functions of art. One of the functions of art, I think, is to dig into the collective human psyche and address underlying human problems that are hard to think about, like: What does it mean to be human right now? What really matters, if anything? Why is it worth it to endure? People don’t like to have their entire existence questioned, so these are hard, uncomfortable problems to confront and they are usually ignored.

Does Banksy’s popularity imply that he fails to address serious questions that art, at least to some extent, should address? Pretty much. His works are by no means illuminating, and the we-are-the-99-percent, anti-establishment-type jabs that pepper his work are neither original nor profound. In South Bronx, Bansky depicted a kid spray-painting the words “GHETTO 4 LIFE” on the wall while a butler holds a platter of spray cans for the child. Presumably, Bansky is trying to hold the mirror up to the segment of society that appropriates urban culture, but he has no connection to it whatsoever.

That said, Bansky is an extraordinary artistic and visual technician. The freedom of street art enables a versatility of technique lost by gallery art, and Banksy uses that freedom to near perfection, sometimes. So that leaves the audience with a bit of a quandary. If you want to call Bansky an artist, you have to assert that art does not need to address any metaphysical truths or questions but rather just needs to look cool. At the same time, if you assert that art does need to address those things, then you have to reject the oftentimes, beautiful work of Banksy. It’s not an easy decision to make. Fact: The right light makes a shallow pool look deep.

One thought on “Banksy May Be Popular, But is He an Artist?”