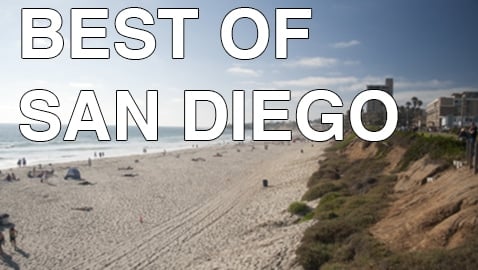 When Family is in Town…

Tucked into a corner on 30th street in South Park, Big Kitchen is one of the best breakfast diners in the county. Once inside, be prepared to bump elbows (literally) with your fellow customers — seating is closely packed — and make small talk with staff. Aside from the colloquial vibe from the people, there are knick-knacks all over the walls, including bumper stickers, photos and signs that tout the diner’s history. Big Kitchen’s menu features everything from biscuits and gravy to a world-famous plate-sized pancake. It’s big. So big, that if you can finish two, the second pancake is free.

If you’ve got the kind of family where simple decision-making turns into blood-curdling arguments, Balboa Park’s 17 museums should appease all strong personalities. The Timken Museum of Art is always free, and each Tuesday, one of the other museums has free entry if you bring your UCSD student ID. Top museum picks include the Air and Space Museum and the San Diego Museum of Man, which is currently featuring a BEERology exhibit about the history of beer in San Diego and around the world. If even the museums won’t quell your family’s bickering, take a walk around the Botanical Building, wander the koi ponds or check out Sun God artist Niki de Saint Phalle’s sculpture “Poet and Muse,” located in front of the Mingei Museum of International Art.

Located in Poway, about half an hour from UCSD, Mt. Woodson offers two challenging trails to intrepid hikers. The first, and most popular, is about eight miles of steady uphill hiking, so plan for a four-hour outing, and bring lots of water. The second trail is a paved service road that may be shorter but is no less challenging with its steep incline. Whichever way you go, you’ll find yourself amongst picturesque views of San Diego that stretch all the way to the ocean on a clear day. Best of all, the infamous Potato Chip Rock perches on top of Mt. Woodson, and if you’re willing to wait in line, you can get a photo souvenir of your daring trek.

Just a quick drive down Miramar Road, Punjabi Tandoor is every UCSD student’s go-to stop for Indian food. The prices are low, and the portions are plentiful at this popular hole in the wall, which always attracts a crowd. Be warned, though; Punjabi Tandoor has very little in-restaurant seating, so all meals — offered on Styrofoam plates and in to-go containers — will need to be taken outside. The chicken tikka masala and the rogan josh, a lamb curry, are among the favorites at the family-owned and -operated restaurant. Add a serving of naan for $1.95, along with a cup of complimentary rice pudding, and you’ll be stuffed.

Bird Rock Coffee Roasters, located in almost-kitschy Bird Rock (a residential beach town just north of PB), offers the perfect combination of a cozy coffee house, homey decor — art from the local elementary school dons the walls — and beachy air, not to mention some of the best coffee you’ll find in San Diego, and maybe even California. Bird Rock practices direct trade, so it communicates with coffee farmers and sends extra profits their way in the case of a high-rated roast. Whether or not you’re a coffee nerd, Bird Rock’s got something for you: coffee die-hards can choose from a variety of black coffees, sourced from Kenya, Guatamala, Honduras and El Salvador, while those who are still making the transition away from Starbucks can grab a really good latte.

If you’re tired of sitting on the sand or get too chilly in the water but still want to experience fantastic beach scenery, grab your date and take the MTS Route 30 down to Pacific Beach, where you can rent a beach cruiser for only $20 for a day. Pacific Beach Cruisers is located on Garnet Avenue between Gresham and Haines. Once you’ve got your bike, you’re free to roam all of PB, including three miles of bike paths up and down the coast. Luckily, if you get tired of biking, you’re still in PB, with ice cream shops and bars galore, so finding somewhere to take a snack break should be a cinch.

Just three or four bus stops away from campus on the MTS 201/202 SuperLoop you’ll find some of the cheapest — and decent enough — sushi in all of San Diego. KI Sushi’s happy hour deal includes 30 percent off all specialty rolls, so the cheaper ones are a real steal. Try the Crazy Boy, a deep-fried California roll sliced vertically into spears, only $5 for six surprisingly filling pieces. KI Sushi’s also popular for its sake bombs — be ready for happy hour to get kind of noisy — and it’s been known to only ID the first guest who orders alcohol. Do with that knowledge what you will.

As you drive across the sweeping arc of the 2.1-mile-long, 200-foot high San Diego-Coronado Bridge, the view of Coronado Island waiting below already looks too pristine to be real. Walking around past the pristine houses, mile-wide streets with park-sized street dividers and extravagant, late 19th-century architecture, you might feel like anything you touch will disintegrate into a million pieces. Coronado’s full of kitschy souvenir shops and overpriced artisan candy shops you want to think you’re too good to shop at, even though you know you’ll come home with a $5 block of fudge anyway. Make sure to check out the historic Hotel del Coronado, which opened in 1888 to become one of the world’s first luxury resort hotels and, later, the site of “Some Like it Hot,” the iconic 1959 Marilyn Monroe comedy

Hash House A Go Go is a surreal experience. With portion sizes that’ll make you feel smaller than an American Girl Doll, a trip to Hash House is not to be taken lightly — fasting the day beforehand is something to seriously consider. Pancakes come on platters and are around the size of a toddler; eggs and potatoes come in skillets that could also be used as anchors. Biscuits look more like small loaves of bread with a shrub-sized sprig of rosemary sticking out the top, and they’re damned good. Bring a friend or three along to split some dishes, or else be prepared to bring home another full day’s worth of leftovers — to be expected for the roughly $15 price tag attached to most items on the menu.

Once you discover thrifting — and if you haven’t, get on it — there are a few kinds of thrift stores you’ll find. There’s the faux-upscale kind that sells mainly clothing from mid-range stores two or three years ago (think Urban Outfitters marked down around $10 from retail price). There’s the basically-a-warehouse kind that’s filled with piles of giant ugly ’80s sweaters, all of which smell like your grandparents’ house, for g$2 apiece. Flashbacks strikes a delicate balance between these two: It’s got a selection of clothing that’s vintage and fairly eclectic, but pieces tend not to be too gaudy — many are trendy and totally wearable. Flashbacks has been home to some to-die-for ’50s, ’60s and ’70s frocks, and if you’re quick, you might lucky enough to snag one.

We know what you’re thinking — the best tacos in all of San Diego can be found on a practically residential street in North PB? But to the skeptics, we say, just go try it. Oscar’s is a hole-in-the-wall, cash-only joint crammed next to a dive bar, with less square footage than your dorm and fewer seats than most dining room tables. The menu is limited, but everything on it is to die for. Oscar’s gets all the little things right: They melt cheese onto their tortillas before they fill ‘em with food so that you won’t get any cold, unmelted shreds, and the avocado they scoop onto some of their tacos is perfectly creamy every time. Both the smoked fish and spicy shrimp tacos pack some serious flavor, or, if tortillas hold you back, go straight for the cup of shrimp ceviche. Don’t waste your time with the burritos — they’re the size of a taco but a different shape and a dollar more.

With around 10 different pizzas to choose from every week, even more San Diego craft brews on tap — or Bud Light and lambic, for your less adventurous friends — and a staff of bartenders so friendly they seem like they’re straight out of a sitcom, Ciro’s Pizzeria and Beerhouse on Garnet in PB is the ultimate place to bring your friends for trivia. The bar hosts trivia nights twice a week, on Tuesdays and Thursday evenings. Correctly answering a challenge question in the middle of the trivia session will earn a free pitcher of beer for you and your teammates, and the top-scoring teams at the end of the night win gift cards to Ciro’s — so do well, and you’ll be back for sure.