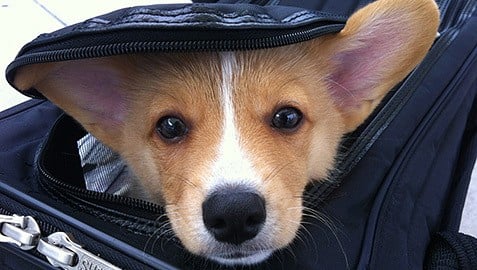 Ventus the Corgi sweeps San Diego – and corgi enthusiasts around the web – with his owners, UCSD seniors Pauline Vu and Kirsten Koa

When two roommates from UCSD decided to adopt a puppy together the summer of 2012, they never expected he would become a star and introduce them to an entire online community of corgi superfans along the way. With soft, orange-brown fur, a big, goofy smile and tender eyes that sparkle, Ventus, a year-and-a-half-old Pembroke Welsh Corgi, has captured the hearts of thousands over social media in San Diego and beyond.

Ventus is the subject of popular Tumblr and Instagram accounts that document his life in San Diego with his owners, UCSD seniors Pauline Vu and Kirsten Koa, who’ve been rooming together for more than a year.

“When we got [Ventus], we wanted somewhere to put pictures of him as he was getting bigger,” Koa said.

The Tumblr, “Ventus the Corgi,” was launched in 2012 when Ventus was a puppy and has almost 3,000 followers to date. Most of its photos capture Ventus in his natural, day-to-day conduct and setting, while others show him donning distinct accessories, like eyeglasses, a colorful bowtie and even a crab hat. Each photo is paired with a witty caption and has several dozen “notes,” likes and reblogs from other Tumblr users.

But it wasn’t until one of Ventus’ puppy photos was turned into a meme that he earned a serious Internet following. The meme, titled “Skeptical Corgi,” presents the then-puppy corgi sitting on a counter and squinting at a veterinarian’s office. The original meme said, “So you’re telling me […] you’re taking off my balls instead of going walkies?” The original meme got over 400,000 notes, and one iteration of it even claimed the 26th spot on BuzzFeed’s “The 40 Most Influential Corgis of 2012.”

“The puppy pictures [of Ventus] were really big, and people [gave him] shout-outs,” Vu said.

Vu and Koa also decided to make him an Instagram, @ventusthecorgi, so that they could more easily and quickly post photos of Ventus on a regular basis. Ventus’ Instagram includes more frequent photos of Ventus on walks, in Vu and Koa’s apartment and at UCSD. The account has nearly 3,000 followers, and each picture earns, on average, roughly 300 likes.

Ventus became even more known after some help from more famous corgi blogs.

“‘Corgi Addict’ was a really popular Tumblr,” Vu said. “She reblogged some of our notes.”

Ventus grew in popularity through the corgi Internet community, a network of corgis and their owners who use social media to share their corgis with the world.

“The corgi community is pretty active, especially in southern California,” Koa said. “[We’ve] met a lot of other corgi owners, and we [became] friends with them. Then [we posted] pictures with their dogs, and [they posted pictures with Ventus]. We got a lot of followers that way.”

Vu and Koa didn’t expect that Ventus would become an Internet sensation.

“We made the Tumblr for Ventus in hopes of keeping an online scrapbook of his pictures and to document his growth,” Vu said. “We did not expect at first for him to go viral, but when he did, we were just really happy.”

Vu and Koa have also discovered that owning Ventus has made people treat them differently.

“Whenever people see anything to do with corgis, they send it to me, because they think I’m the crazy corgi lady,” Koa said.

As a side project and as a way to promote Ventus, Vu and Koa decided to create a game called Corgi Memory — a memory card game inspired by real-life corgis. Vu designed and drew all of the characters in the game, all based on famous Internet corgis.

“I thought [Corgi Memory] would be a good project since memory games are pretty simple to program,” Koa said. “[Also], Pauline is trying to get into project and design.”

While Corgi Memory was intended to be a fun, personal project, Vu and Koa have seen it add to Ventus’ — and other corgis’ — fame.

“It was kind of like a marketing technique,” Koa said. “All [the other popular] corgis have thousands of followers, [and] all these owners are happy to see their corgis in a game and cartoonified. They help us promote the game.”

Now, Corgi Memory has around 2,000 downloads on the Apple App Store and has over 20 customer reviews, all with four or five stars.

“[Because of] the awesome reaction that we’ve gotten from the community, we’re planning on doing more things later on, like creating a game that’s not just a memory game,” Koa said.

Despite the phenomenon Ventus has become online, Vu and Koa also love him as the dog they adopted a year and a half ago.

“[Ventus] has a very unique personality — he thinks he is human half the time,” Vu said. “Ventus can sense your emotions, and he chooses how he reacts to them. When you are sad, he will comfort you, and when you are upset, he knows to give you space.”

Though Ventus’ fame was never intended, or even expected, Vu and Koa expressed their gratitude toward his fans.

“We are really happy that he has so many followers, and we try to update his social media threads every day,” Vu said. “We are also really glad that people love Ventus as much as we do, and [we are] more than willing to share his life with the people who adore him.”