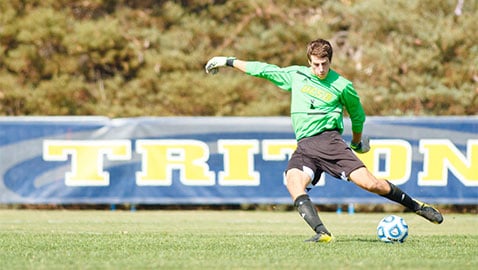 With the help of two come-from-behind goals by midfielder Andisheh Bagheri last Sunday, the UCSD men’s soccer team has clinched a conference tournament berth for the first time since 2005.

The second-seeded Tritons join first-ranked Chico State and third-ranked Cal State Los Angeles in the California Collegiate Athletic Association Tournament to be held at Cal State Stanislaus from Nov. 8 to Nov. 9. The fourth seat will go to either Sonoma State or Cal State Monterey Bay depending on the outcome of this weekend’s games.

“I’m really happy, but we expected to be going to the postseason. Obviously it’s super exciting, and it’s the first time that I’ve been,”  senior captain Alec Arsht said. “But we want the first seed, too. We want to win the South, but we have a couple more games.”

Bagheri — who has scored six game-winning goals so far this season — was again the hero against San Francisco State and Cal State Monterey Bay.

On Friday, the Tritons dealt San Francisco State its eighth straight loss. In the 49th minute, senior midfielder Will Pleskow found senior Cory Wolfrom inside the 16-yard box, who drilled the ball into the bottom-left corner.

Bagheri scored a rocket from 18 yards out in the 65th minute to seal the win despite a late Gator goal.

Two days later, back on their home field, the Tritons punched their ticket to the CCAA Championships with a win against CCAA North Division leader Cal State Monterey Bay.

UCSD played most of the game with a 1-0 deficit, after Monterey Bay’s Servando Perez scored his ninth goal of the season off a header lofted over senior goalkeeper Josh Cohen.

Regrouping during halftime, the Tritons spent the majority of the second period on Monterey Bay’s half, outshooting the Otters 11-2.

UCSD inched closer to frame throughout the half, playing through forward Alessandro Canale — marked closely by Monterey defender Saydou Kamara. Canale snaked his way around the 16-yard box, creating opportunities, which eventually paid off in the 81st minute, when the Tritons were granted a free kick collected by Canale.

Canale dribbled the flank to find Bagheri, who finished the equalizer.

Just over one minute later, Canale connected with Bagheri again, sending a back-pass that Bagheri buried in the back of the net.

“Bagheri’s a huge piece of what we do,” UCSD head coach Jon Pascale said. “He is definitely one of the best players in the league, he has been for some time. It’s great to see him score goals.”

The Tritons have two more games left in the regular season. On Friday, UCSD will face Cal Poly Pomona on the road. The following Sunday, the Tritons will return to RIMAC Field to play CCAA South Division rivals Cal State Los Angeles, where UCSD will honor its nine seniors.

But with a tournament ticket in hand, Pascale said his Tritons aren’t ready to let up off the gas this coming weekend.