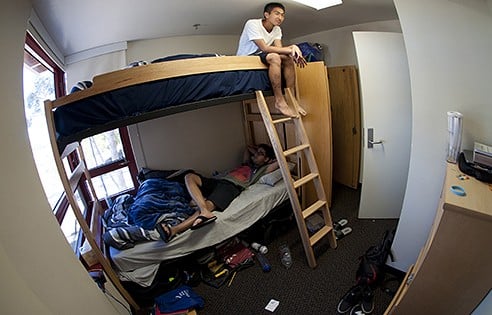 Approximately 300 UCSD students were displaced into “temporary double” on-campus housing assignments this fall, due to overcrowding with a record number of 13,000 campus residents. Administrators within UCSD Housing, Dining and Hospitality created the temporary doubles by converting single rooms — located in many residential halls and some on-campus apartments — to double rooms composed of two wardrobes on one side of the room and a bunk bed on the other side.

The change follows a 22 percent increase in admissions from last year, coupled with the continued four-year housing guarantee first introduced to the incoming class of 2012. The previous year, students were guaranteed three years of on-campus housing.

“We have a commitment to house our incoming freshmen and transfer students who want to live on campus,” Assistant Vice Chancellor of HDH Mark Cunningham said. “This demand coupled with increased demand from continuing students who want to remain on campus generated a situation where demand for housing was at all-time high. However, we kept our commitment to our parents and incoming students to provide on-campus housing.”

The temporary doubles will not have the desk and chair available in typical rooms; instead, students will likely have to use desks placed in the common areas of residential halls.

“[HDH] looked at various options, and when all other housing alternatives were exhausted and the demand was still higher than availability, HDH developed the required space by converting regular singles into temporary doubles,” Cunningham said.

According to Cunningham, students received these assignments based on the date of their housing application submission. Since then, HDH has received concerns regarding the assignments and their lack of personal space.

However, students’ chief complaint continues to be the pricing, as those placed in temporary doubles pay the same annual price of $9,809 as triple room residents but have 13.33 less square feet per student.

Currently, there are several petitions on change.org urging UCSD to lower the cost for those in temporary double rooms or assist in placing the students in nearby off-campus apartment complexes. One petition on change.org, aimed at Chancellor Pradeep K. Khosla and titled “University of California at San Diego: Lower the Price of the Temporary Double or Find More Housing,” garnered 988 supporters since the housing assignments were announced.

“Living in a single room with another person and no desk is really outrageous for the price,” student Morgan Goulart said in a comment on the petition.

While they are not pursuing any on-campus housing projects at the moment, HDH does hope that demand for housing subsides following the beginning of the school year.

“Temporary doubles have been, and are being and will continue to be returned to regular singles spaces as regular spaces open up, and if residents in the temporary spaces choose to move or not,” Cunningham said.