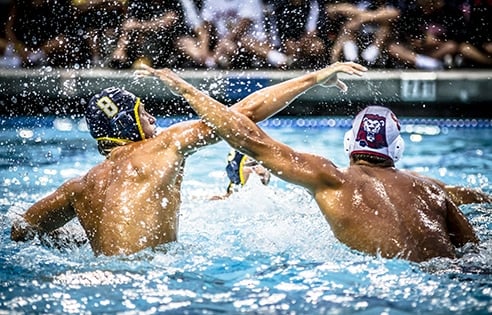 Tritons take down Loyola Marymount and Navy, but fall to UC Santa Barbara

The Triton water polo squad improved to 7–7 this week, going 2–1 in the first three games of a four-game home stand. UCSD outplayed Loyola Marymount University on Sept. 25 and the United States Naval Academy on Friday before falling to UC Santa Barbara 11–7 on Saturday.

The 14th-ranked Tritons shone in their Wednesday match against Western Water Polo Association rivals Loyola Marymount in front of a crowd of 1,639. UCSD, in its first match of the academic quarter, fell behind 2–1 after one quarter but had evened up the score at 4–4 before halftime after a second-quarter ejection allowed utility Joe Dietrich to score on a six-on-five advantage.

In the Friday matchup against Navy, the Tritons trailed by two goals at halftime before exploding for six third-quarter goals that ended up securing the 11–9 win. Dietrich and junior Jeffery Jarvis scored three goals each, and goalkeeper Cameron Ravanbach notched 12 saves.

“We had to make a change and put more pressure on the ball. We were able to wear them down a little bit, and that lead to some pretty timely counter attacks.”

In its third match this week, the team fell to UC Santa Barbara and was the Tritons’ worst offensive effort in the last seven games. The Division-I Gauchos proved difficult for the Tritons to handle after they outscored UCSD 5–4 in the opening quarter. The Gauchos launched a 3–0 run in the second period, and the Tritons never came within three goals of UCSB — now 10–2 overall.

The Tritons are away for the better part of a week before they return to Canyonview Aquatic Center to play nationally ranked No. 1 UCLA. The team will compete in the SoCal Tournament  next month.